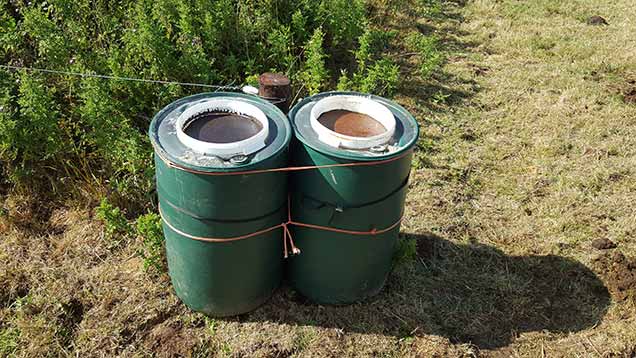 A farmworker from Dorset has put farm waste materials to good use to keep badgers away from cow mineral licks.

Newmans Farm in Bagber has been shut down with bovine TB since October 2014, but when Simon Crane joined the team milking 200 cows with Mr and Mrs Tite in December the same year, he wanted to do something to help.

“TB is costing far too much money due to loss of heifers and dairy cows. It affects my generation who may want to inherit farms. Jobs will be lost and farms will be non-existent,” he says.

Mr Crane came up with the idea of raising the lick buckets off the floor using recycled materials after his boss expressed concern with badgers seen on the farm.

Starting with an empty 200-litre teat spray barrel, he cut a hole in the top the same diameter as the lick tub’s base. After filling with sand for stability, Mr Crane simply dropped the buckets into the hole, and these are held in place at the top of the barrel because of their wider rim.

Mr Crane says: “They are perfect for the height and reach of the cows, and badgers cannot climb up as they are round and plastic, so obviously very slippery.”

He believes contact with badger urine and saliva is linked to the spread of the disease, so anything he can do to prevent contact is a bonus, he says.

“The more cows, the longer I have a job.”

Mr Crane wanted to share his invention to help other farmers shut down with bovine TB. Do you have any livestock farming inventions you would like to share? Email a picture and a few details to fwlivestock@rbi.co.uk.