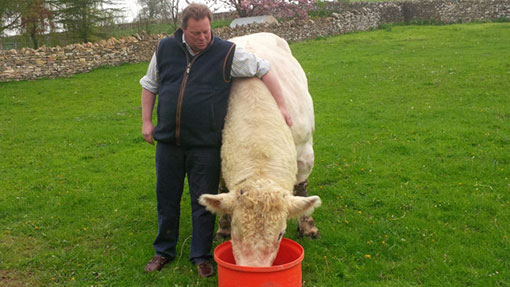 A farmer has spoken of his devastation as his breeding bull and three other cattle had to be shot after they succumbed to bovine TB.

Gloucestershire farmer David Barton, who has been battling TB on his farm for years, said watching his 11-year-old breeding bull, Ernie (pictured), two heifers and a suckler cow being culled was one of the worst days of his farming life.

The animals tested positive for bovine TB during a routine six-monthly test at Manor Farm, in Middle Duntisbourne, of 160 head of cattle 10 days ago.

They had recently been given worming medication, which prevented the animals from being taken away to an abattoir for slaughter.

Instead, a heartbroken Mr Barton, who recently set up a blog to document the realities of being a farmer living with bovine TB , watched as the animals were shot one after the other on his farm on Tuesday (6 May).

“We have had Ernie on the farm for nine years. He was a very endearing animal, very gentle and quiet,” said Mr Barton.

“Everyone that came to the farm remembers him. Because they had been wormed, they had to be slaughtered on the farm.”

He added: “It’s the reality of what’s happening. I’m fed up with the continual cycle that I’m in of cattle being infected with TB from badgers.

“What happened here on Tuesday was really difficult for me and the family.”

Mr Barton said the day before the DEFRA tester came to his farm, his heart sank while he was inspecting his cattle.

“I saw a lump on the neck of one of the heifers – the tell-tale sign of a positive reaction to the TB test – which meant the test wouldn’t be clear,” he added.

“And when the tester came, she found a cow and another heifer that had tested positive. I felt sick.”

But Mr Barton said the most upsetting news was a positive test on Ernie.

“Ernie is nearly 11 and we’ve had him on the farm for nine years. He’s become like part of the family, almost a pet. He’s remarkable and looks magnificent for an old boy,” he explained.

“He was the last animal to be tested and it hadn’t even crossed my mind that he might be a reactor. So to be told that news was devastating.”

“Ernie is nearly 11 and we’ve had him on the farm for nine years. He’s become like part of the family, almost a pet. He’s remarkable and looks magnificent for an old boy. He was the last animal to be tested and it hadn’t even crossed my mind that he might be a reactor. So to be told that news was devastating.”
David Barton, Gloucestershire farmer

The latest TB outbreak means Mr Barton has lost more than 100 cattle to TB, including about 50 over the past 18 months.

He said he had no doubt about the cause of TB on his farm.

“We have four main badger setts and half-a-dozen satellites,” he added. “Badgers are basically covering the whole of my grazing.

“The numbers keep increasing because there is no control of them. We are at the stage where they are just out of control – they are everywhere.”

Mr Barton said he was “hugely disappointed” by the government’s decision not to extend the pilot badger culls in west Gloucestershire and west Somerset to other areas this year.

“There is a common consensus that we need to tackle bovine TB. I believe that part of the that should be a reduction of wildlife which is carrying the disease, which is badgers,” he added.

“People have to really understand this. We know badgers are infected and it’s a major problem in cattle. Unless we get on top of it, I don’t know where the industry will end up.

“We have got to grasp the nettle now.”

The upshot of the latest positive TB results is a return to 60-day TB testing at Manor Farm. This means the entire herd will need to be tested every 60 days and has to pass two tests before it can start operating normally again.

A second year of pilot badger culling in Somerset and Gloucestershire could begin anytime from 1 June this year.

This week, protesters vowed to increase their activity when the culls restart in Gloucestershire.