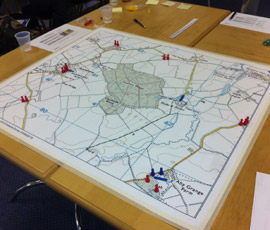 Officers policing the badger cull have met with animal rights activists to simulate possible night-time confrontations between protesters and marksmen.

A table-top exercise was held on Wednesday (12 June) as part of preparations for Operation Themis – Gloucestershire Police’s strategy for policing the cull.

Campaigners opposed to the cull, including the RSPCA and Jay Tiernan, a leader in the Stop The Cull organisation, took part in wargames in police headquarters in Nailsworth, Gloucester.

Using an impartial consultant, the exercise talked through a variety of scenarios and the legislation around them.

The day uncovered potential serious issues like the roles and responsibilities of each party when responding to injured badgers, such as who decides whether animals should be shot to end their suffering or taken to a vet for treatment.

“If the wounded badger is sparko [unconscious] and blood is pouring out of it, that is one thing, if it is conscious and fighting like hell, that is another,” Lee Hopgood, an RSPCA chief inspector who took part in the exercise, told The Guardian newspaper.

He warned activists that anyone delaying the putting down of an injured badger could be committing an offence.

Another issue raised was how any illegal shooting of badgers will be distinguished from the licensed cull.

Police said they were working to resolve both issues.

Inspector Mark Ravenscroft of Gloucestershire Police said: “Our aim was to facilitate a conversation with all interested parties and explain our roles.

“We want to ensure that no one gets hurt and that everyone is able to carry out their law abiding business.”

Obstructing the highway is a criminal offence, but officers might allow a short protest as a compromise with a group determined to block the road all day. But Insp Ravenscroft said public safety of everybody involved was “paramount”.

He added: “We could request that the culling company stop activity on the ground on a particular night to safeguard public safety.”

Private companies licensed by the government to shoot badgers have not informed police when or exactly where the culling will begin.

Figures released by DEFRA in October showed the estimated cost of policing the four-year culls in Somerset and Gloucestershire was £4m. Last summer’s aborted trials cost the taxpayer £1m.

Two six-week pilot culls are due to start this summer in west Somerset and west Gloucestershire to test the safety, efficacy and humaneness of culling badgers using a combination of trapping and shooting and free shooting. In total, around 5,000 badgers will be culled across both counties in the pilots.

If successful, the culls, part of government plans to combat bovine TB, will be rolled out more widely across the country to other “TB hotspots”, including Devon and Cornwall.

More than 37,000 infected cattle were slaughtered in the UK last year because of bovine TB, costing taxpayers £100m. The government estimates this figure will rise to £1bn over the next decade unless we act now and use every tool in the box to control this disease.