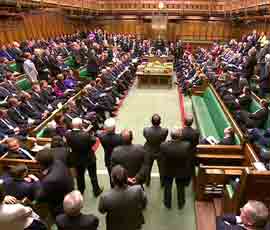 The government has won a parliamentary vote on its plans for a badger cull to curb bovine TB by a majority of 49 votes.

A Labour motion calling on the government to abandon the pilot culls in Gloucestershire and Somerset on Wednesday (5 June) was defeated by 299 votes to 250.

Before the vote was held in the House of Commons, MPs took part in a tense three-hour debate in which the pros and cons of the cull were discussed.

Shadow DEFRA secretary Mary Creagh said the cull was “bad for farmers, wildlife and taxpayers”. She urged the government to abandon the cull and prioritise badger and cattle vaccination.

“Two or three years of vaccination would give badgers full immunity,” she added.

In response, DEFRA secretary Owen Paterson insisted the cull was “essential” and would make a “significant contribution” to tackling TB.

“I’ve no doubt that the benefits from badger control will, to the businesses, farmers and communities that have suffered for too long, prove worthwhile,” he added. “That’s why it’s crucial these pilots go ahead.”

Six-week pilot culls in west Gloucestershire and west Somerset are due to begin this summer as part of the government’s TB eradication package – despite the policy coming under pressure from animal welfare groups, celebrities and scientists.

Although not binding, the government would have come under pressure to scrap the culls if the vote had gone against it.