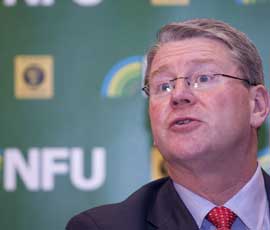 NFU president Peter Kendall has urged farmers to contact their MPs ahead of a parliamentary debate on the government’s badger cull to combat bovine tuberculosis.

Farmers whose livelihoods had been affected by TB should write to their MPs explaining how the disease had devastated their cattle herds, he suggested.

Doing so would provide politicians with up-to-date anecdotes and information ahead of the House of Commons debate next Thursday (25 October).

Where possible, farmers should take the opportunity to raise the issue of bovine TB with their MP in person – inviting them on to farms, said Mr Kendall.

Many MPs will be holding surgeries in their constituencies this Friday (19 October). It will be the last opportunity for many farmers to speak to their MP before the debate.

Acknowledging opposition from campaigners against the cull, Mr Kendall said: “We are going to face a really difficult few weeks. Please, stand up and be counted.”

It was important that MPs understood that a bovine TB was not just a badger welfare issue – it was a cattle welfare issue as well, he added.

Farmers outside TB hotspot areas should also get in touch with their MPs, said Mr Kendall. They too could help by arguing the case for a cull.

The House of Commons debate comes after more than 155,000 people signed a government e-Petition calling for the issue of badger culling to be given parliamentary time.

Mr Kendall said that the parliamentary debate offers a fresh opportunity for the science to be fully explained and for any misinformation to be corrected.

“We understand this is a highly emotive issue and people should feel their views have been listened to,” he said.

“Badgers play a huge part in the cycle of reinfection for TB in cattle; this is why a cull of badgers is a regrettable but absolutely necessary part of this TB eradication package.

Although MPs could vote against the cull, the policy had been thoroughly scrutinised and upheld after two legal challenges in the High Court and Court of Appeal.