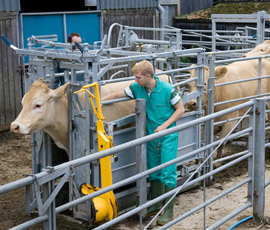 Almost 5,000 cattle herds across Britain succumbed to bovine tuberculosis during 2012, statistics released by the Animal Health and Veterinary Laboratories show.

The total of 4,919 new breakdowns represents a 0.4% decline compared with a figure of 4,941 in 2011, according to the AHVLA’s Annual Surveillance Report.

In England overall TB breakdowns fell by 1.7% from 3,880 to 3,775 herds while the disease in Welsh herds continued to rise with a 3.3% increase to 1,091 breakdowns. Scotland recorded the biggest rise at 26% but, at just 53 herds infected north of the border, the number remains relatively small.

Other measures used in the report showed a rise in the disease across all three regions. The number of herds which had their Officially-TB-Free status withdrawn (OTF-W) was up by 7.8% in England, 10.5% in Wales and 62.9% in Scotland. This figure covers herds which have had the disease confirmed after postmortem examination.