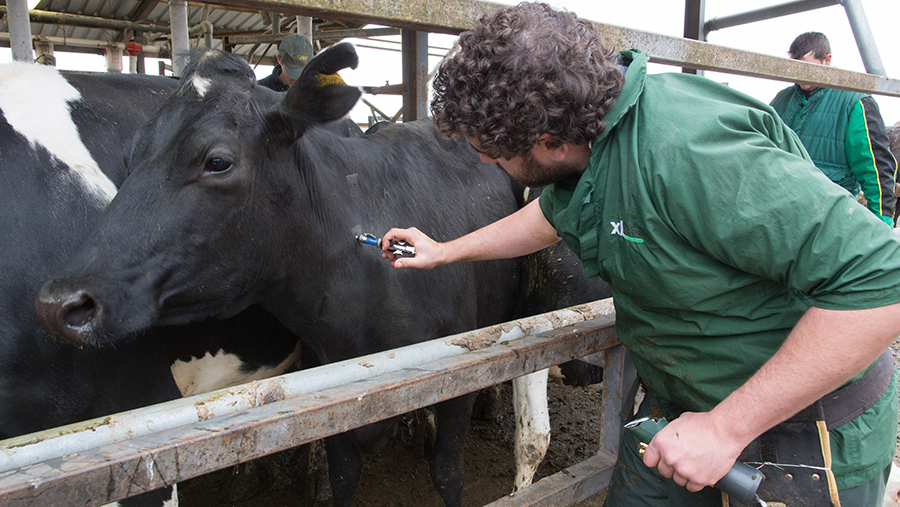 A new highly sensitive and specific TB test which allows infected cows to be identified within six hours has taken a step closer to full commercial use.

Actiphage has been accepted for “exceptional private use” in England under an Animal and Plant Health Agency (Apha) protocol. This means only a few large, persistently infected herds can use it for now.

East Anglian firm PDB Biotech, which pioneered the new test, says it can detect the presence of disease-causing mycobacteria in blood or milk samples in just six hours, allowing affected cattle to be identified quickly before the infection spreads.

However, a second qPCR (polymerase chain reaction) test, developed by Liz Wellington, life sciences professor at Warwick University, is required to see if a cow found carrying the disease is actually infectious.

The qPCR test detects bovine TB in dung to show if a cow is “shedding” (spreading) the disease. But this test is still awaiting authorisation for commercial use.

The current statutory tuberculin skin test for bovine TB, which is based on an animal’s immune response, can take up to three days to produce a result. The skin test is also unreliable and is believed to miss about 20% of infected cows, leaving them in the herd to infect other cows.

The gamma interferon blood test is used alongside the tuberculin skin test to maximise the probability of detecting TB-infected animals in cattle herds affected by TB breakdowns, especially in high-risk areas for the disease in the South West.

Actiphage will require further testing before it can be approved for standard veterinary use. There is no clear indication of when it will widely be available for use on UK farms.

However, under the Apha protocol, there are large restrictions which will limit its use to just a few farmers for now.

“This is not the panacea for TB management,” he stressed. “However, Actiphage is a very sensitive test to detect the organism which causes TB in cows’ blood.

“It will find the organism that causes bTB – Mycobacterium bovis. That will tell us whether the animal is actually infected – but that does not mean that it is infectious.

“The current approved tests – the skin test, the gamma interferon blood test and the Idexx Elisa blood test – all look for the animal’s response to exposure to the organism, rather than the organism itself.”

Over the past three years, Mr Sibley has been testing several hundred cows on a Devon-based farm. He said many of the cows have had over 30 statutory screen tests and come back negative after gamma blood and tuberculin skin testing.

However, Mr Sibley said the Actiphage test had detected TB in cows that had tested negative for the disease using statutory testing methods.

He believes the Actiphage test could be of real use for clearing up TB in chronically infected herds.

“There are herds out there, although relatively few, that are chronically infected with this disease (TB) and they are acting as a reservoir of infection,” said Mr Sibley.

“Some of them are not under any restrictions as they are skin testing clear. But Actiphage will find them.”

Dr Berwyn Clarke, chief executive at PDB Biotech, said: “Actiphage is now included within a series of measures that farmers can use in conjunction with their vet and with specific APHA approval as a means to improving their disease management strategy.

“For many farms that have been struggling for years it provides the first step to becoming TB-free. This move by the APHA is a really positive step towards tackling this devastating disease.”

The test can also distinguish between a vaccinated and an infected animal – paving the way for new types of disease control when vaccine become available in future.

Actiphage will be profiled in the Innovation Hub at the Royal Norfolk Agricultural Show next month (27-28 June).

For details on how to obtain permission for the full Exceptional private use of non-validated tests for TB on cattle in England, go online to the APHA Vet Gateway.