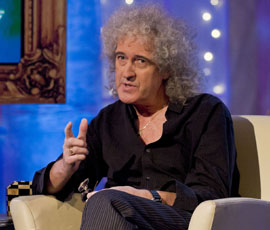 The NFU is to complain about the validity of claims about the control of bovine TB made by rock star Brian May during a TV interview.

Speaking on ITV’s The Alan Titchmarsh Show, the legendary Queen guitarist said killing badgers would achieve little in the fight against bovine tuberculosis.

Dr May then made an impassioned plea to the British public to try and halt two pilot badger culls planned for England.

Commenting on the show, an NFU spokesman said: “We are writing to producers to challenge some of the scientific inaccuracies contained in the interview.”

Dr May claimed cattle farming was responsible for transmitting the crippling disease, which has infected the badger population.

“The cows infected the badgers in the beginning because it is a disease which is endemic to cows throughout the world, so basically farming has infected a population of badgers, the badgers then can infect back,” he said.

Dr May told the show there was an “anthropocentrism issue” with the cull and he questioned why humans believed they had the right to kill badgers.

“Badgers have been in this country longer than we have, they’ve been here for literally millions of years minding their own business… we think that we’re the only species on the planet that matters, which is obviously self evidently not true.

“I don’t think we have the right to treat animals the way we do.”

He went on to point out that 11,000 badgers had previously been killed in the Randomised Badger Culling Trial in 2008 and that the experts involved at the time concluded that killing badgers “could make no meaningful contribution to controlling Bovine TB in cattle”.

“Every independent scientific adviser in this country would say that culling is not the answer, however the government are still going forward [with the trial],” Dr May said.

However, in a written statement given to the show, DEFRA said culling in highly infected areas could constrain the disease.

“Bovine TB is a devastating disease that will cost £1bn over the next 10 years if we take no further action,” said a spokesman.

“Our culling pilots are part of a complete package of measures that will help us bring the disease under control and eventually eradicate it.”

However, Dr May disagreed with the statement, telling the show: “I would dispute a lot of that.

“Even the DEFRA scientists will tell you, the only long-term cure for this disease is vaccination.”

Dr May suggested both cows and badgers should be vaccinated to eradicate the disease.

“The problem is the EU regulations don’t allow us at the moment to do that,” he continued. “The only long term cure for this disease is vaccination.”

Dr May called on the British public to “do something” to help change the government’s mind about the cull by backing his campaign.

Two badger cull pilots, aimed at reducing cattle tuberculosis, are due to take place in west Gloucestershire and west Somerset in August after the Olympics and last for six weeks, with further areas likely to follow.


Read the latest on bovine TB and the proposed culls on our dedicated page. Or have your say on our forum.