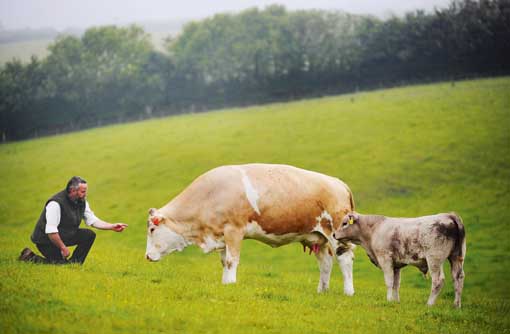 TB has devastated suckler cow herds on Exmoor, but one farmer who was involved in the Krebs Trial has successfully restructured his business to cope with the disease.

Like many farmers, Rupert Dod has endured the destructive power of TB first hand – but he has also witnessed the benefits of a badger cull.

Having suffered serial TB breakdowns at Withiel Farm, Minehead, before the Krebs Trial cull, he has enjoyed many disease-free years since, and is now working to help other farmers tackle the problem.

“Our first TB breakdown was in 1997-98; we had cattle in four buildings spread over two miles – two were fed from one silage clamp and two from another clamp.”

The grass for one clamp was cut from a field with a large badger population, and it was the two buildings fed by that clamp that went down with the disease.

“We think we inadvertently mowed up a badger latrine. Within six months we found six emaciated badgers in the valley that had died with every appearance of TB.”

That first breakdown started five-and-half years of movement restrictions, with a few cows slaughtered at each test. “We haven’t had any major breakdowns – just rumbling problems. But with 200 cows to a shed over the winters, it highlighted that cattle-to-cattle transmission was not a problem.”

“We sold at suckled calf sales, with the surplus Angus’s going to Waitrose. After the outbreak we lost all our markets overnight – even the deadweight sales to Waitrose.

“Our only option was to fatten all our cattle, at a time when six-month-old calves were selling for just £100 less than fat cattle at 12-14-months-old. It was very frustrating and cost us a fortune. We also started to AI all the cattle, because of the risk of losing a stock bull to TB.”

In 1998-99, the area was chosen as a reactive cull spot in the Krebs Trial, but because Withiel Farm was already under restriction, each new reactor did not trigger a cull.

“During foot-and-mouth in 2001, our neighbouring farm missed some TB tests – when they did test, 59 out of 160 cows were slaughtered. That finally triggered a cull.”

The cull of 144 badgers took place in 300 acres of Withiel Farm, including the hotspot field identified as the source of the original outbreak.

“Within six months, in 2002, we went clear of TB and we’ve never had a case linked to that area of the farm since. We keep a monitor of where the cattle are grazed – we had one reactor at the far end of the farm a year later, and have had four inconclusive reactors from the same place this year.”

“By 2004, we had 1,050 head of cattle on the farm, but when pre-movement testing came in that put a high risk to our suckled calf sales so I decided to cut the cows right back. When the headage payments went in 2005, I also pulled out of Blade because it didn’t suit our system any more.”

Having sold or culled many of his cows, Mr Dod was approached in 2006 by Philip Dennis to supply top-quality local beef to the food service sector.

“I had to go and buy back some of my store cattle.” He carried out meat yield and taste tests, and set up the Exmoor beef brand, getting local farmers involved to supply finished cattle. “But we got some complaints about quality and consistency, and decided all the cattle needed to be finished on the same ration.

“Despite paying a significant premium we had trouble convincing everyone to change their ration, so I ended up having to finish all the cattle myself. It’s helped the quality control but has put a real strain on the finances.”

As well as his own calves from 300 Angus or Angus x British Blue suckler cows, Mr Dod buys in extra stock to finish. “Last year we finished 400 cattle.”

The new system sparked an idea of how to help local farmers who were struggling with TB restrictions. “Six years ago we had seven suckler herds in the local parish – now there are only two. To secure a good supply of local cattle and help farmers with the problems of not being able to sell suckled calves, I set up a TB clearing unit.”

The idea was to bring in calves from restricted farms, obtain two clear TB tests and release them back to the owner to sell on, either through the Exmoor beef brand or elsewhere.

“We trialled 60 cattle last year and it worked well. It’s something I’d like to develop further if there is genuine interest – but we would need more buildings, which is a big problem, both financially and with regard to planning permission.”

With the industry now awaiting a government announcement about a potential badger cull, farmers in some hotspot areas have been working together to prepare for the task in hand.

“Working on the back of the VLA9 project, 600 farmers on Exmoor have signed up to a future cull, covering well over 70% of the land mass required. At the moment we don’t know what DEFRA’s announcement will be, but once we know the requirements we can really move ahead.

“I’m convinced that, done properly, a cull would be very effective, very quickly; what’s happened here is evidence of that. But we have to make sure farmers work together on this.

“We have to be a bit patient, and get limited companies set up and structured in such a way that it is professionally run and licensed. What we don’t want is people going off and doing things by themselves, and not seeing it through properly. It will be the only chance we get.”

Although part of Exmoor is owned by the National Trust, Crown Estate and Forestry Commission, Mr Dod is convinced that, should the government announce a cull, each organisation would go ahead with it.

“The National Trust is trialling vaccination of badgers at Killerton, but it would be a waste of time in this hotspot area – it needs to be used as a firebreak around infected areas, to prevent the disease from spreading.”

For best results, Mr Dod believes that entire social groups of infected badgers should be culled, and their setts filled in. “I don’t think there’s a farmer out there who is opposed to having badgers on their farms, as long as they are healthy.”

Getting the public onside for a TB cull

However, he is convinced of the need for privacy. “Farmers need to be as discrete and professional as possible, as there is a concern about antis disrupting a cull and having already made horrible threats.”

It is likely the government will grant licenses through the limited companies, and require farmers to sign up to the cull for at least four years. “There is the difficulty of payment – cash flow is very tight so it would be hard to pay for it all up front.”

The industry also needs to get the public on side. “We need one or two independent nature television presenters to show the effect of TB in badgers on the public – it can spread to humans and domestic animals, and causes a slow and unpleasant death for the badgers themselves.”

However, despite the industry’s efforts, there is still the risk the government will not grant a cull.

“Farmers are being very restrained while waiting for this announcement. Without DEFRA’s approval, there’s going to be a much higher risk of farmers taking it into their own hands, which will be ineffective and might lead to increased spread of the disease.

“We have already lost a lot of herds in this area due to TB – it is critical we keep the remaining cattle. Key to that is the control of TB and the strive for a healthier badger population in the future.

“Badgers and cattle can live quite happily together if we haven’t got this disease factor, which is already spreading at about 10 miles a year across the UK.”