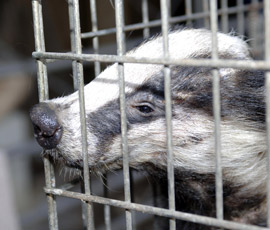 The extended pilot badger cull in west Somerset has finished, DEFRA has confirmed.

The licence to cull badgers expired at 12 noon on Friday (1 November), a spokeswoman for the government agency said.

The pilot cull in the county was extended by three weeks after marksmen failed to kill enough badgers within the initial six-week period.

DEFRA said 850 badgers were culled in the timeframe, about 60% of the revised estimated population of 1,020 badgers.

Licensing body Natural England granted the company carrying out the cull in Somerset a three-week extension to help marksmen hit their targets of removing a minimum amount of 70% of the local badger population.

However, as the extended licence expired on Friday (1 November) both DEFRA and NFU remained tight-lipped over whether marksmen had reached their target.

DEFRA secretary Owen Paterson is expected to update MPs on the results of the cull in Somerset by delivering a written statement to the House of Commons early next week.

A DEFRA spokeswoman said: “The Somerset cull has finished and data on humaneness, safety and effectiveness will be considered by the independent expert panel. The secretary of state will update parliament as soon as possible.”

The NFU said it would not be commenting on the cull in Somerset until Mr Paterson has aired his statement.

The six-week pilot cull in west Gloucestershire was extended for eight weeks, until 18 December, after marksmen only culled 30% of the estimated badger population.

Giving evidence to an Environment, Food and Rural Affairs (EFRA) select committee this week, Mr Paterson said it was “obvious” that six weeks were “not long enough” for marksmen to remove 70% of badgers in an area.

But he was adamant that despite the slow start, the government’s badger cull policy would not be “knocked off course”.

Last year, 38,000 cattle were slaughtered in the UK because of bovine TB, costing the taxpayer more than £100m. DEFRA said the country will never eradicate bovine TB unless it tackles the disease in wildlife.

The motion raised concerns that the pilot culls had killed fewer badgers than envisaged, but had still been extended.

It called on the government to bring forward a vote to decide on the “most cost-effective, humane and efficient way to reduce bovine TB”.