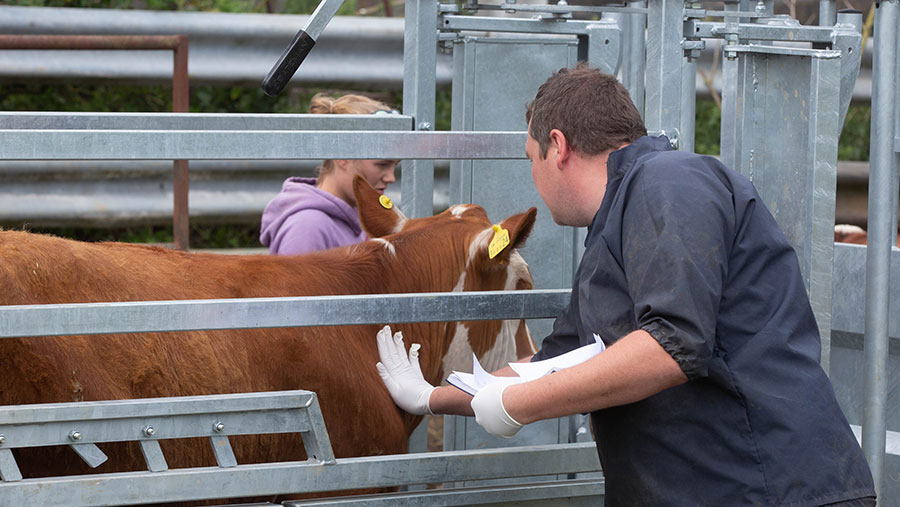 Defra chief vet Christine Middlemiss outlines the next phase of the government’s plans to eradicate bovine TB in England by 2038.

We ask her about research and development, funding, testing and whether a vaccination will ever be viable.

What are your key areas of research and development for the next 5-10 years?

As set out in the government’s response to the Godfray Review earlier this year, one of the top priorities is developing a deployable cattle bovine TB vaccine with the objective of deployment within the next five years.

The response set out five main blocks to our research programme, although there is a lot of overlap and interdependencies.

Improved cattle tests and vaccines – This includes field trials of the Bacillus Calmette-Guérin (BCG) vaccine and associated Differentiating Infected and Vaccinated Animals (Diva) cattle test, funding novel diagnostics, and support for validation of new tests to allow us to consider adding them to the tests currently used to control TB in England.

Understanding and managing the wildlife reservoir – This includes understanding the effect of the current culls on TB incidence, developing more efficient ways to determine the distribution of infection in the badger population, and understanding farmers’ views of badger vaccination.

On-farm biosecurity interventions including looking at whether slurry plays a role in bovine TB.

Socio-economic drivers of behaviour including looking at what factors lead farmers to invest in biosecurity measures or to purchase higher-risk animals, rather than lower-risk animals, and attitudes to TB compensation and insurance against TB breakdowns

Designing, predicting and evaluating our policies – This will involve improved mathematical modelling of the epidemic to better estimate the effects of proposed TB policies. I am particularly interested in how we bank the disease eradication benefits gained from intensive culling as we move forward, and how we can better empower private vets to work with their farmers to tackle TB on their farm.

For which of these have you secured funding?

We have a fully funded R&D programme for this financial year. It is a GB programme, so has been designed and delivered in partnership with the Welsh and Scottish governments. The UK government’s Comprehensive Spending Review (in progress), will determine future funding.

Will EU funding for bovine TB for the UK be replaced or lost after Brexit?

EU funding in support of England’s bovine TB eradication programme ended on 31 December 2019. For 2019, the funding reimbursed less than 5% of the total cost of the programme. Since then, domestic funding has filled the gap.

How do you see the roles of all the different tests?

Our TB testing regime for cattle and other species is already risk- and evidence-based.  Even so, I’m very supportive of adopting a more targeted and flexible approach to TB testing in cattle.

We need to find disease earlier both in herds and in individual animals, and deal with it quickly when we find it.

There are plans to make better use of the existing range of tests Animal Plant and Health Agency (Apha) and private vets use, such as the skin test, gamma blood test and serology tests, to find bovine TB earlier and remove it from cattle herds more quickly.

This means using the most appropriate tests for surveillance and breakdown management in that herd, in a targeted, evidence-based and flexible way.

We will use the best available validated diagnostic tools taking account of the local epidemiological situation, statutory obligations and international standards required for trade.

We hope that our research programme and the work of others outside government will add to our armoury of tests over the longer term, although the tuberculin skin test and the supplementary interferon-gamma blood test are likely to remain the cornerstone of the TB surveillance programme in cattle for the foreseeable future.

Are there any areas of TB testing you are most hopeful about?

I’m particularly excited about our recent announcement on the use of a new polymerase chain reaction (PCR) test for the detection of M. bovis in post-mortem tissue samples, initially from slaughterhouse cases and non-bovine animals.

This will greatly shorten the time taken by the laboratory to determine whether TB is present in those animals. If the PCR results are negative, Apha can lift the herd movement restrictions much sooner than under the current protocols.

If they are positive, we can get those results to farmers and their vets quickly, so they and Apha can start to tackle the disease as soon as possible.

If the accuracy and speed of TB testing improves, the number of herd breakdowns would in the short term go up as more infections are revealed.

Would there be any plans to help mitigate the on-farm human and financial impact of this?

Yes, that’s one of the trade-offs, and more tests could mean longer breakdowns and/or more animals removed, as we work to limit the number of undetected infected animals left in a herd at the end of a breakdown.

There is already compensation for compulsorily slaughtered cattle based on the actual market prices of healthy cattle. In effect, government pays the average replacement cost of TB-affected cattle.

That will continue, but we have said we will use compensation arrangements to incentivise herd owners to take basic biosecurity measures – what Godfray called “no regrets” measures.

We also want to support farmers and the veterinary profession by building on the availability of good advice already available through things like the TB Advisory Service, the TB Hub, and new training for private vets.

The Godfray Review suggested devolving disease control operations from Apha, Natural England and local authorities to a new body. What is happening about this?

This is a matter which goes beyond the governance of our bovine TB eradication programme and will depend, in part, on how the recommendations in Dame Glenys Stacey’s Farm Inspection and Regulation review are taken forward.

As set out in the February 2020 Farming for the Future policy statement, this is being considered within the scope of developing an agricultural policy which underpins our ambitious vision for farming outside of the EU and we intend to engage further on this later in the autumn.

The role of the private vet in working with their clients on disease control, management, and effective prevention is crucial.

The veterinary profession plays a major role in shaping and delivering the strategy to eradicate the disease, from sitting on our advisory groups to being on farm day-to-day delivering TB testing and advice to farmers.

I really welcome the British Veterinary Association’s revised TB strategy, which I look forward to further discussions with them on.

Farm vets’ expertise, understanding of their clients’ needs and detailed local knowledge are critical to our efforts to manage disease on farm and eventually achieve eradication.

We know that infection from badgers is a key factor in the maintenance of TB in large regions of England, and therefore reducing that reservoir of infection reduces infection rates in local cattle herds.

I’ve got robust, peer-reviewed scientific evidence that our current culls are contributing to reducing the incidence of TB in cattle.

But it is only one tool and I’m also keen to use all the tools available, including the injectable badger vaccine: once we reduce the level of infection in the badger population, we need to protect them from further infection, so maintaining the disease benefits we’ve already gained.

The government has made it clear that culling is not something that can continue indefinitely. Our response to the Godfray Review set out plans for adapting and evolving the strategy for England over the period to 2025, which includes a gradual transition away from badger culling.

Tackling the reservoir of infection in wildlife, chiefly badgers, is an important element of this strategy.

While it is important to retain the ability to introduce new cull zones where there is a clear epidemiological link between infected badgers and persistent clusters of TB in cattle, we envisage that any remaining areas would join the current cull programme in the next few years and that the badger cull phase of the strategy would then wind down by the mid to late 2020s.

How do you view the split of responsibility between the government and farmers in tackling the disease?

Ultimately, success in achieving the strategy goal of official TB-free status for England by 2038 will require strong partnership between many of those with a stake in the matter.

The government will continue to take the lead in setting the strategic direction for bovine TB control in England and the economic and regulatory framework.

But we want the farming industry and veterinary profession to continue to feel a shared sense of ownership. Others, including auction markets, retailers and food manufacturers also have a role to play.

There are actions that only farmers can take, for example safe sourcing of replacements. We need everyone to be doing their bit, together, and not leaving it to others. 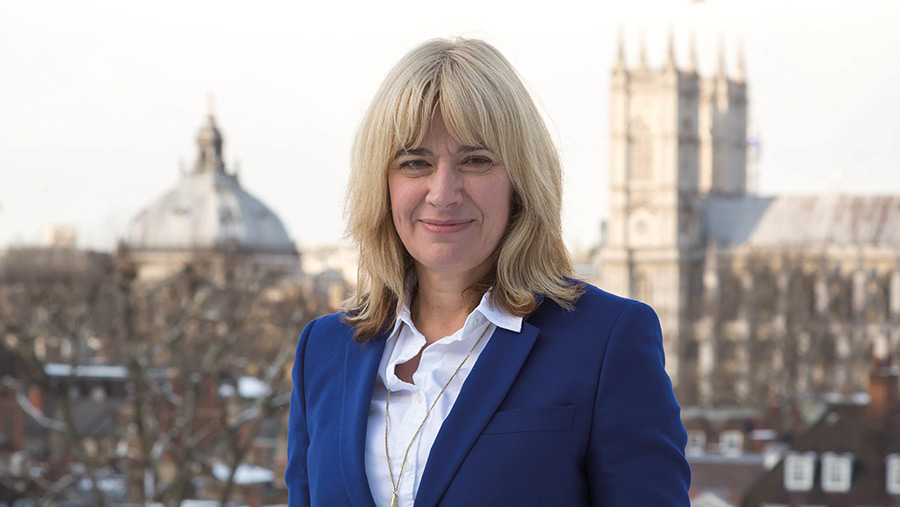 Prof Christine Middlemiss was appointed as the UK’s chief veterinary officer (CVO) in March 2018, having previously worked as the CVO in New South Wales, Australia, since 2016.

Before taking up her appointment she worked for Defra developing policy solutions to detect, assess and respond to new and emerging animal disease risks internationally and in Great Britain.

Prof Middlemiss has been appointed as a visiting professor of practice at Harper Adams University. She comes from a farming family in the Borders of Scotland, with a background in beef cattle and sheep.