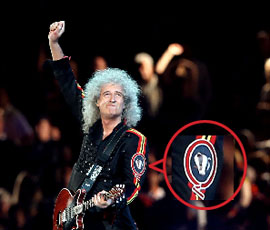 Rock star Brian May is under fire after using the closing ceremony at the London Olympics to highlight his campaign against a badger cull to combat bovine tuberculosis.

The Queen guitarist took to the stage for the global TV performance wearing a costume emblazoned with a badger emblem surrounded by a “Q” on his left arm.

A similar emblem, featuring a fox head, was on his right arm.

Both motifs were visible as Mr May played alongside Jessie J, leading the crowd during a rendition of Queen classic We Will Rock You.

An animal welfare campaigner, Mr May is a high profile opponent of the government’s badger cull to combat bovine TB in cattle.

Earlier this year, he wrote the foreword to a think tank report calling on the government to abandon plans for a pilot badger cull in south-west England.

He has also appeared on TV chat shows arguing that killing badgers would achieve little in the fight against bovine tuberculosis.

But critics said Mr May was wrong to use the closing ceremony of the London 2012 Olympics to make what amounted to a political statement.

The costume drew a flurry of comments on Twitter.

“Shame on Brian May. This is not a political rally.”
Doug Jackson

Dairy farmer Pete Ledbury accused the rock star of “sticking two fingers up to the people who make the British countryside what it is”.

Farm business consultant Doug Jackson wrote: “Shame on Brian May. This is not a political rally.”

The Countryside Alliance tweeted: “Loved the closing ceremony of the Olympics but appalling to see Brian May making a political statement with his fox and badger badges #shame.”

Many comments were full of praise for Mr May, however, with the North Wildlife Trust suggesting he was “rocking out for wildlife”.

Labour MP Gavin Shuker told his Twitter followers Mr May was “big on badger welfare. When he comes into the office to discuss, we give him soya milk”.

Another tweet by Mr Shuker, suggesting Mr May was “on message”, was re-posted by shadow DEFRA secretary Mary Creagh, who also opposes the badger cull.

Even so, some viewers were bemused by the badger and fox motifs, believing them to be a reference to Wind in the Willows.

But Mr May’s message wasn’t lost on other viewers.

A tweet by Carly Williams said: “Love that Brian May performed in closing ceremony wearing badges of badger and fox on his jacket. A true #animalwarrior!”

See our page dedicated to the fight against bovine TB