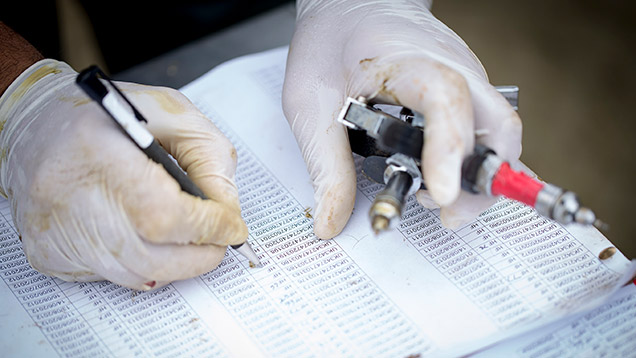 Up to 40 cattle have been slaughtered following a rare outbreak of bovine TB on a farm in Lincolnshire.

The cattle tested positive for the disease in October on a large livestock farm in mid-Lincolnshire, but news of the outbreak has only come to light this week.

An industry source said the rare outbreak was causing “real concern” among cattle farmers in Lincolnshire, which is considered to be a TB-free county.

It will add further evidence to suggestions that the disease is slowly spreading north and east from western regions.

The source said: “The farm where the outbreak took place is a very large farm in mid-Lincolnshire which farms several thousand cattle. They found up to 40 cases [of TB].

“If we’re trying to make an effort to control this disease, more people should have been told. A lot of farmers aren’t happy about it.”

“It involves several thousand acres across grassland, but it is run as one unit. A circle has been put around the farm and farmers with livestock have been contacted.

“Nobody knows how the disease got there; whether it was found in smaller animals, grazing animals, penned-up animals, an infected animal moved to the farm or an animal taken to slaughter.”

Although livestock farmers in the nearby area had been informed by Defra about the outbreak, some were questioning why the ministry hadn’t done more to tell people across the rest of the county.

One angry farmer, who did not want to be named, said: “The ministry hasn’t done anything about this by informing people who have had cattle next door to their grazing areas.

“If we’re trying to make an effort to control this disease, more people should have been told. A lot of farmers aren’t happy about it.”

“Farmers in low-risk areas such as Lincolnshire are encouraged to make informed choices when buying in cattle to reduce the chances of bringing the disease on to their farms.”
APHA spokesman

An NFU spokeswoman said: “Lincolnshire is a TB-free county and we have always thought the only way TB could come into the county is on a lorry, because we don’t have infected badgers.

“To the best of our knowledge, we don’t have many infected cattle, as the Defra website shows. The number of TB cases is in single figures. But being Lincolnshire, yes, it [the outbreak] is of great concern.”

The incidence of bovine TB cases in low-risk areas such as Lincolnshire is “very low”, according to Defra.“Similar to Scotland, the majority of breakdowns in the low-risk area can be linked to movements of undetected infected cattle from other areas of the UK.”

A spokesman for Defra agency, the Animal and Plant Health Agency (APHA), said: “Lincolnshire remains a low-risk area for bovine TB. Each year there are a small number of TB incidents in the county, typically caused by bought-in cattle.

“The APHA has kept the NFU informed of measures being taken in the county to combat TB. These measures include increased testing of cattle holdings within a 3km radius of a TB incident, and routine use of an interferon-gamma blood test in conjunction with the skin test to improve detection and removal of infected animals.”

He added: “Farmers in low-risk areas such as Lincolnshire are encouraged to make informed choices when buying in cattle to reduce the chances of bringing the disease on to their farms.

“After purchase they are also advised to keep new animals separate from the main herd until they have tested negative for TB, and to consider post-movement testing.”