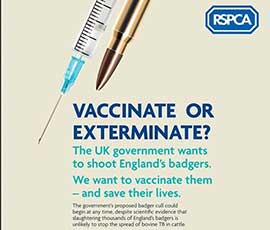 The RSPCA looks set to be censured for making misleading claims about the badger cull, reports The Daily Telegraph.

The Advertising Standards Authority received more than a 100 complaints after an RSPCA advertisement earlier this year headlined “Vaccinate or Exterminate?”.

The advert showed a bullet alongside a needle.

“The UK government wants to shoot England’s badgers,” it said. “We want to vaccinate them – and save their lives.”

Part of the RSPCA’s campaign against badger culling as a means of controlling bovine TB in cattle, the advert was published in the Metro newspaper.

The Telegraph reports that the ASA has now provisionally upheld complaints that the advert’s “extermination” claim was misleading.

This is because the cull is only being trialled in two areas.

The RSPCA responded to the ASA by saying its claims were backed up by estimates that at least 70% of the local badger population would have to be shot in the cull areas.

It said: “While the culls may not result in the total eradication of badgers in England as a whole, it was possible that in certain areas within the cull zones the loss of badgers could be total.”

The ASA has rejected other claims that the advert was wrong to suggest vaccination was a viable alternative to shooting badgers, the Telegraph reports.

An ASA spokesman said: “The ASA Council is the jury that decides whether advertisements have breached the Advertising Codes.

“It has yet to make a decision in the case involving the RSPCA ad. Once it has reached a decision we will publish our findings.”

An RSPCA spokesman said: “The ASA has not made a judgement so we are unable to comment yet.”

Latest news on the badger cull