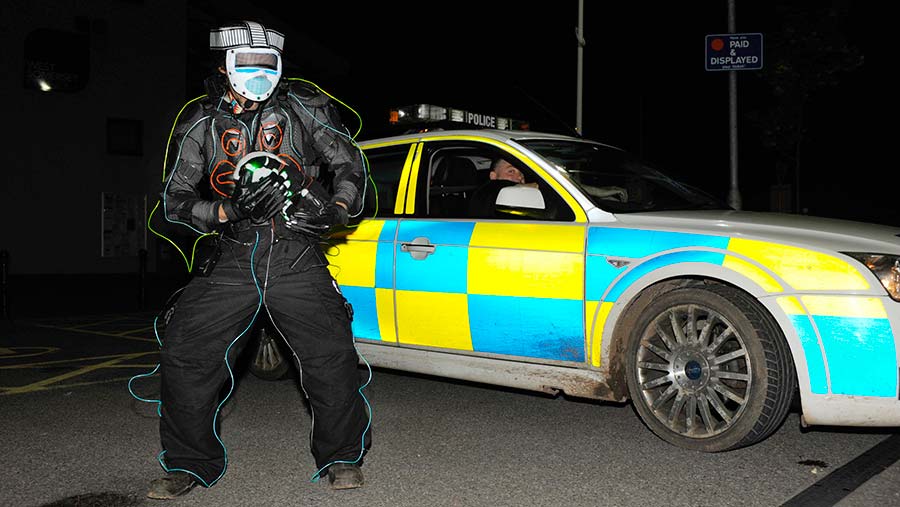 The Somerset badger patrol, with one member dressed as a robot © London News Pictures/REX/Shutterstock

Policing the badger cull in Somerset in 2016 cost £700,303.36, according to figures released by Avon and Somerset Police.

Trained marksmen carried out culling in the county for a fourth year, removing 217 badgers during a six-week period.

These costs will be covered in full by Defra and paid for indirectly by the taxpayer.

The figures represent a 26% increase on the previous year, when police spent £555,514 on policing the culls in the county.

The NFU says activists who disrupt the cull are adding to the costs of a lawful operation which otherwise would be much cheaper than badger vaccination.

Vaccinating badgers against TB cost £825 a badger in Wales in 2015, before a shortage of BCG vaccine led to the abandonment of the scheme in the north Pembrokeshire Intensive Action Area (IAA).

However, opponents insist badger culling is a costly, inhumane distraction which will do little to curb bovine TB levels.

In a statement on their Facebook page, anti-cull activists Somerset Against the Badger Cull (SABC) said its activists had maintained a peaceful presence throughout four years of the cull

“We will continue to protest against the inhumane, unscientific, ineffective and expensive badger culls this year,” the group said. “SABC stands up for badgers, conservation and science.”

A Defra spokesman said: “These figures show the cost of policing each badger control licence continues to reduce year on year.

“We work closely with all those involved in delivering the culls so they continue to be carried out safely, effectively and humanely.”

Badger culling licensee Natural England is currently considering applications for further badger control licences this year. Defra said there is no set date for when the outcome of these applications will be announced.