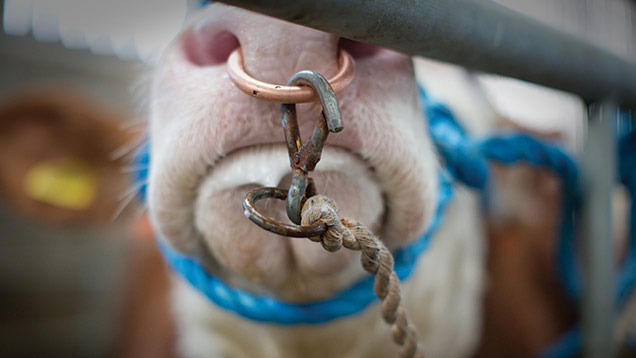 Auction markets across the South West are seeing record entries at their TB-restricted sales, indicating continued high levels of the disease in the region.

Last month saw more than 1,620 cattle from TB-restricted farms go under the hammer in just a few days at Holsworthy, Hallworthy, Exeter, Frome and Sedgemoor markets.

And entries for this month’s sales look similarly high, with Exeter, Holsworthy and Hallworthy markets selling more than 850 head this week and promising entries for Sedgemoor and Frome next week.

“TB-restricted markets have been a saviour for many farmers, and as long as the cattle are strong, prices haven’t been any different to clean stock,” said Rob Venner, auctioneer at Greenslade Taylor Hunt.

“When numbers are low, they can even command a premium as buyers want to keep their approved finishing units full.”

However, finishers only wanted strong store cattle that they could turn around quickly, meaning younger or weaker animals were far more difficult to sell, said Mr Venner.

“The hardest thing is youngstock – rearing units now have to be filled from one holding over a maximum period of six weeks, which is really difficult – and they can no longer sell on the open market after two clear tests. As a result, shifting TB-restricted calves is virtually impossible, so people are just shooting their calves now, which will reduce the beef supply in the future.”

Trevor Rowland, auctioneer at Cooper and Tanner, said the vast majority of trade was in store cattle, with about 60% being dairy cross-breds. “We don’t get many herd dispersals as you can’t just sell to another TB-restricted herd now. The buyer has to be of the same TB standing as the seller, which is costing farmers and auctioneers thousands of pounds and creating welfare issues in some cases.”

Bill Harper, council member of the National Beef Association, said it was wonderful that the orange markets and approved finishing units (AFU) system were functioning so well.

“But TB is spreading and Defra is not updating the edge area quickly enough. TB in Cheshire and Cumbria, for example, is endemic – they should not be classed as edge areas,” he said. “In reality, most of the country is either endemic or edge area, and should be classed correctly, resulting in more annual TB testing and fewer barriers to trade.”

Farmers were also worried that Defra may remove the option for grazing AFUs next year, warned Kivells auctioneer David Kivell. “That will just be another nail in the coffin. Defra seem intent on making life difficult without addressing TB,” he said.

“Herd breakdowns in north Cornwall have skyrocketed, and at the moment we have a 15-month-old cut-off in orange markets – once you get below that, the discount is £100-150 a head. If the grazing option disappears, buyers wouldn’t want anything below 20 months old, which really limits farmers’ options and would render many orange markets unviable.”