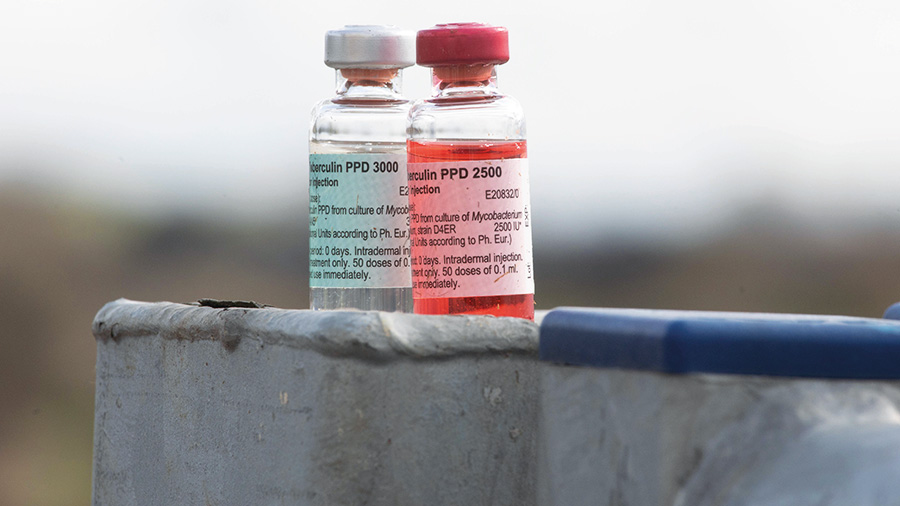 While the number of cattle killed to control TB declined marginally in 2019, about 40,000 dairy and beef animals were still slaughtered across England and Wales.

With the level remaining unacceptably high, the government has begun to step up its bid to tackle the disease this autumn.

With the level remaining unacceptably high, the government has begun to step up its bid to tackle the disease this autumn.

In early September, it announced badger culling would be extended to 11 new areas, taking the total to 54 zones in England.

The government is also pushing a three-pronged approach to tackle the disease on farms:

Here we set out the different regimes and controls in place across the UK regions and highlight the latest changes introduced this autumn.

England continues to be split into three levels of TB risk and disease prevalence.

These are high, edge and low-risk areas, with different control measures employed in each.

While these remain, there are changes under way to the testing regime in some areas.

Tests are four yearly across the low-risk area (LRA), which has a low incidence of TB and there is no known reservoir of the disease among local badger populations.

Breakdowns within LRAs have largely been triggered by infection from bought-in cattle.

Farmers buying in stock from areas outside the LRA must arrange and pay for post-movement tests. Tests must be completed between 60 and 120 days after an animal has joined the herd.

Where herds are on a more frequent testing regime, a pre-movement test is required for animals 42 days old and over, destined for holdings anywhere in Britain.

The edge area (EA) acts a buffer, sitting between the high-risk area (HRA) and LRAs. It spans 14 zones, which have a wide variation in disease levels, reflected in differing testing regimes.

Six of the areas closely bordering the HRA are reckoned to be at a greater risk of TB breakdowns and are on six-monthly tests, while the remaining eight have an annual regime.

For example, herds in Leicestershire are TB tested annually, while herds in Oxfordshire are subject to six-monthly TB testing by default.

The high-risk area (HRA) has the greatest incidence of bovine TB and more repeat cases among herds. There is also a higher level of infection in the local badger population.

The HRA covers 12 zones concentrated in the South West and West Midlands. Until the end of August, these were under an annual testing regime, however, this is one of the major changes introduced this autumn.

From 1 September 2020, Defra started to roll out six-monthly testing procedures in the HRA. The first two counties to see the increased frequency are Shropshire and Staffordshire.

The new regime will be introduced to further HRA zones in the coming months.

Other existing measures include:

CHeCS scheme members are required to implement a range of biosecurity measures and practices to reduce the risk of a TB outbreak.

Farmers are audited and receive a score based on the number of years free from the disease – for example, a score of six means the farm has been TB free for six years.

Farmers with a score of one or more can revert to annual testing and can also see zero penalty rates applied to compensation in certain situations. CHeCS measures include:

Incentives for registered farmers actively participating in the scheme

The whole of Scotland has been designated officially TB free (OTF) since September 2009. Low-risk herds are exempt from the default routine testing regime of 48 months, but these are:

The Animal and Plant Health Agency annually assesses each Scottish herd’s eligibility for exemption from TB testing, and writes to cattle keepers to confirm their status.

Wales is split into low, intermediate and high TB areas according to disease incidence.

The low TB area (LTB) area is in the north-west region of Wales, including Anglesey. It has few breakdowns and these are caused mainly by bought-in animals with latent infections.

The risk to cattle is also reduced because a recent survey of badgers found dead showed no infection in this region.

Unlike the LRA in England, where testing is on a four-yearly basis, the LTB in Wales is on an annual test regime.

Any cattle brought from the intermediate or high TB areas of Wales, or the EA or HRA in England, are post-movement tested between 60 and 120 days.

Two intermediate TB (ITB) areas have been established – one runs from the central south coast through mid Wales, and the other is separated by a narrow channel of the high TB area in the north-east.

These ITB zones have a moderate level of TB breakdowns each year, which are mainly traced back to bought-in stock. Herd testing is on an annual basis, but farmers must also comply with pre-movement testing requirements, where all cattle 42 days old and over must have had a negative test within 60 days of the movement.

Wales’ two high TB (HTB) areas straddle the intermediate area, with one sited in the south-west and the other running up the border with England to the east. The disease is endemic in both and there are high levels of breakdowns each year.

Persistent outbreaks, where there is a breakdown of 18 months, are particularly bad in the west HTB area. The Badger Found Dead Survey also confirmed the presence of TB in wildlife with the HTB in the east, recording far higher levels at 19% compared to HTB west at 9%.

Testing for the disease is carried out annually and all stock 42 days old and over must have a negative result within 60 days before movement.

Northern Ireland’s Department of Agriculture, Environment and Rural Affairs (Daera) has a series of measures to combat the spread of bovine TB.

Despite the desire to promote a positive approach to tackling bovine TB with the CheCs incentives, the government has pledged to penalise farmers who fail to meet testing requirements.

Hefty penalties are applied through both Basic Payment Scheme (BPS) reductions and deductions in compensation paid for animals slaughtered to control the disease.

Completing TB tests on time is a condition of the BPS support system.

Penalties for late tests are therefore, applied through the cross-compliance system.

These are levied strictly and are triggered immediately after a test date has been missed.

In addition to cross-compliance fines, farmers will incur severe penalties on the amount of compensation they receive for animals slaughtered.