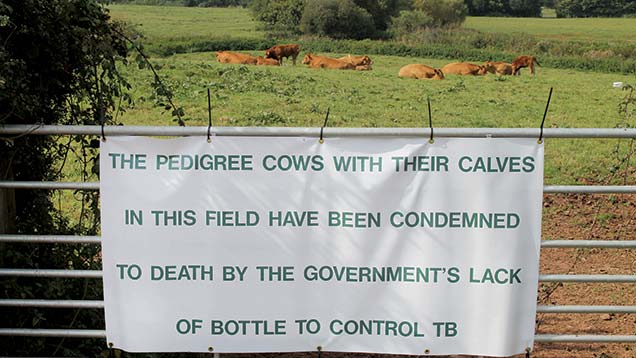 An experienced farm vet has questioned whether vaccinating badgers is adding to the spread of bovine TB in the West Country.

Since the National Trust started vaccinating badgers on its Killerton Estate in Devon in 2011, TB has become a far greater problem on farms in and around the 20sq km vaccination area.

At least five farms on the estate have gone down with TB recently, with many losing large numbers of cattle after each test.

George Dart, a partner at the Vale Veterinary Centre in Cullompton which works with the Killerton Estate farmers, said: “I have deep concerns about the severity of new and recurrent breakdowns both within and especially on the fringe of the estate.

“Could the fringe effect be due to disturbance [perturbation] caused by the vaccination programme? Sadly we have seen no benefits to date from vaccination alone.”

“I have deep concerns about the severity of new and recurrent breakdowns both within and especially on the fringe of the estate.”
George Dart

Mr Dart added: “From working closely with both cattle and wildlife, we are convinced of the benefit to both of supporting other measures, with locally informed strategic culling.

“This culling might need to avoid the immediate vaccination area so as not to disrupt the experiment, but may be of great benefit on both the fringe of the experimental area and beyond.”

“The problem is pretty severe, and it’s now spreading outwards.”

The vet advocated post-mortems on badgers to check the effects of vaccination.

“If the estate is to go on with a vaccination programme, it would be most useful if all vaccinated badgers were permanently identified, and a percentage culled to check their disease status, to reassure farmers that under field conditions vaccination doesn’t actually make things worse.”

But Alex Raeder, project manager at Killerton, said it was a big jump to attribute the spread of TB to the vaccination project, and said it would be hugely expensive and illegal to cull badgers for post-mortems, should the project be extended. “However, we would be extremely interested in getting some really good science on the role of badgers in TB,” he added. “The debate has become very political and led by belief – wherever you stand on the debate, we need good science to make rational decisions.”

The National Trust was in discussion with tenants and the AHVLA over starting a badger vaccine training programme on the estate, to help with wider vaccination in the edge areas, said Mr Raeder. “I think there are relatively few downsides – if we can vaccinate for a bit longer we’ll be creating greater immunity, which can only be a good thing.”