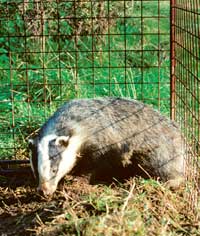 About 100 farmers within Wales’ badger cull zone are refusing to allow Welsh Assembly officials on to their land just days before the first badgers are likely to be trapped.

Although most of the 1500 landowners affected by the cull have agreed that officials can enter their land for sett survey work, some farmers are refusing to comply.

It is not known whether any of the 350 cattle farmers within the cull area are among the reluctant landowners but what is clear is that the size of the 1500 holdings vary significantly, from large-scale to very small farms.

A spokesman for the assembly government said it had the legal power to force entry if necessary.

“A minority of landowners had objected to us conducting a survey of badger setts on their land until they knew the outcome of the judicial review.

“A judge has decided that what we are proposing to do is legal, therefore we are contacting the few remaining landowners to arrange for the sett survey work to take place,” the spokesman said.

“We will consider carefully the next steps. This project has to be managed as effectively for the sake of cattle farming in the area.”

The radical measures to eradicate bovine TB in Wales is intensifying with the introduction of measures to prevent transmission between cattle within the cull pilot area.

From Saturday (1 May), the cattle farms in the Intensive Pilot Action Area in parts of north Pembrokeshire, Ceredigion and Carmarthenshire will be tested for TB every six months and cattle movements into and out of this area will only be allowed with strict pre-movement testing.

But there is still no indication of when the first badgers in this 288sq/km will be trapped and killed and what numbers are involved.

Sett survey work is nearing completion and this could be the trigger for the cull to get under way. This will have to link in with an end to the closed season for badgers and consultations are continuing on when this date will be.

With feelings running high among wildlife groups it is unlikely that the start date of culling will be announced publicly.

Although Wales has decided to adopt a more radical approach to bovine TB eradication than England where badgers will be vaccinated, Wales has not ruled out the possibility of using the vaccine to protect clean populations of badgers.