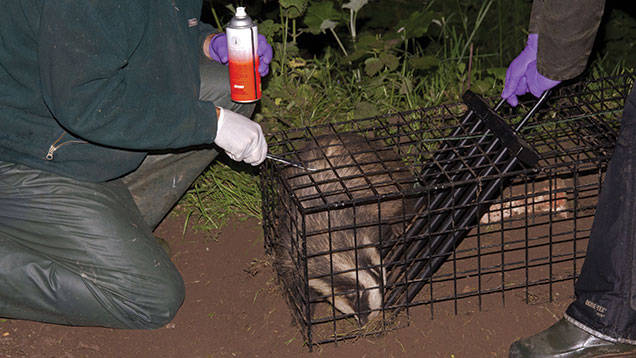 More than 1,300 badgers have been vaccinated in the third year of trials to drive down bovine TB in Wales.

The announcement by the Welsh government takes the total number of badgers vaccinated in the intensive action area (IAA) in west Wales to more than 4,000.

The five-year project aims to develop a level of immunity against the disease in the badger population and to help prevent TB spreading through herds in the IAA primarily located in north Pembrokeshire.

Wales’ deputy farm minister Rebecca Evans said: “Bovine TB is one of the biggest challenges facing Wales’ farming industry, and I am pleased to announce that we have completed the badger vaccination field operations for the third year within the intensive action area.

“Participation in this project is voluntary and I am grateful to farmers and landowners for their continued co-operation in giving us access to their land.

“The vaccination work is undertaken in cycles lasting about three weeks – the first two weeks involve liaising with the landowner and preparatory work, and vaccination taking place in the third week.

In the first year of its badger vaccination project, which began in May 2012, the Welsh government successfully caught and vaccinated more than 1,400 badgers, followed by some 1,350 badgers in the second year.

Welsh government employees who have successfully completed an Animal Health and Veterinary Laboratories Agency course relating to the cage trapping and vaccination of badgers by injection carry out vaccination under licence.

The Welsh government is tackling the bovine TB epidemic by a comprehensive approach including annual testing of cattle, strict biosecurity measures, movement control and the badger vaccination programme, with a long-term objective to also implement the use of TB cattle vaccines.

The Welsh model has reduced new incidents of the disease by 48% in the past five years by implementing cattle-based measures, with no badger culling.