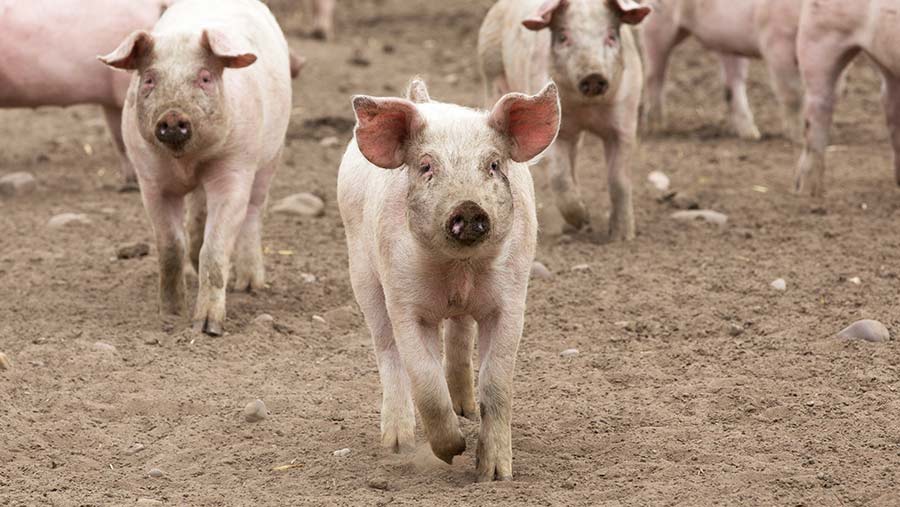 Defra is stepping up its efforts to keep African swine fever (ASF) out of the UK with a high-profile awareness campaign at British borders.

The most visible initiative is a poster campaign at ports and airports highlighting the risks of bringing in contaminated products.

The poster explains that the disease – which can survive even in cooked and deep-chilled meat – could be introduced from ASF-affected regions, including China, Russia, Romania and Poland.

A Defra spokesman said the poster was part of a set of communications that was being designed to be placed at points of entry.

“[These will] inform people of the disease risk and ask that they do not bring personal pork imports into the UK,” he said.

The move comes after an Animal and Plant Health Agency ASF bulletin, which warned of “ongoing concerns” about pork products from China and eastern Asia entering the EU in passenger luggage and being discarded in areas where wild boar or domestic pigs are present.

It also follows criticisms by vets and the National Pig Association (NPA), which compared UK efforts to keep out the disease with measures employed by other countries.

The NPA said that seizures of illegal meat imports in the US and checks in Australia, Japan and elsewhere, revealing the presence of the ASF virus in imported meat, showed a tougher approach.

But the Defra spokesman defended the UK’s approach, which already had robust measures in place.

“Since the spread of the disease into Europe, control measures have been put in place to ensure that there is no trade with the UK in live pigs, wild boar, or meat products from affected areas.

“Trade in live pigs, wild boar, or meat products from ASF-affected Third Countries to the UK is also prohibited,” he said.

“We are also working closely with the pig sector to raise awareness of the risks and advise on maintaining high biosecurity standards, which should minimise the risk of infected meat products being illegally or accidentally fed to feral wild boar or domestic pigs.”

“We want to see a robust poster campaign making the risks and penalties from bringing meat into the country clear to everyone, as well as more proactive surveillance and seizure of illegal meat imports,” Dr Davies said.

However, she said that the move was long overdue, with ASF moving relentlessly across Asia and Europe towards the UK.

“ASF is on our doorstep and we must do everything possible to keep it out,” Dr Davies said.

She hailed the approach taken in Scotland, where the government had already stepped up searches at points of entry.

The Scottish Government has also instigated an awareness campaign at universities with high numbers of overseas students and targeted caterers and other food buyers to ensure they are aware of the risks, Dr Davies added.