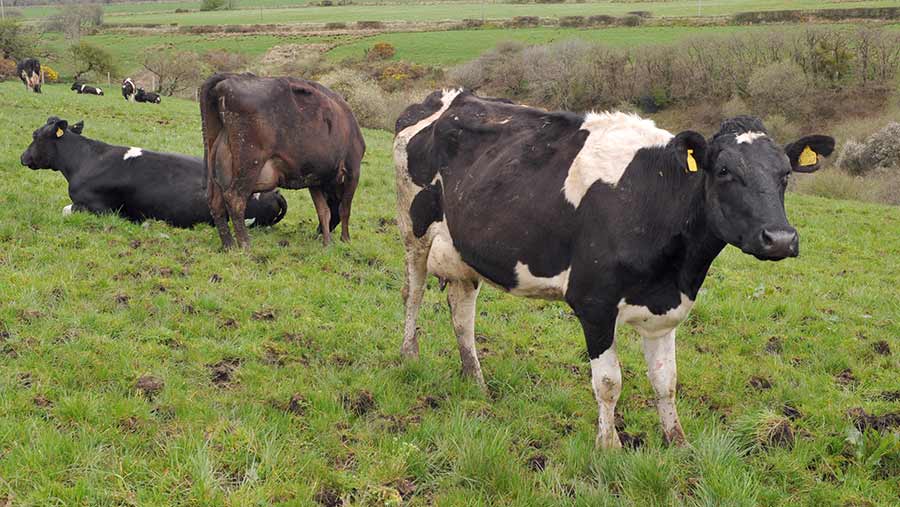 A technique which identifies the presence of mud snails infected with fluke is being used to help Welsh farms determine fields posing the greatest risk to animals.

The presence of mud snails is a clear risk factor for fluke infections in livestock as the snails are integral to the fluke’s lifecycle.

But detecting these snails is not easy. Snails are not present in all wet areas, as commonly assumed, and trained staff are needed to identify potentially suitable habitats, find these tiny, elusive creatures and differentiate them from other non-fluke transmitting snails.

Hefin Williams, a lecturer in agricultural environment at the Institute of Biological, Environmental and Rural Sciences (Ibers) at Aberystwyth University says this process would be impractical on a national scale because it is costly and time-consuming.

However, an environmental test that detects mud snail DNA in water has been developed at Aberystwyth University and could be the solution.

How the test has been trialed on farms and the results

Dr Williams has been leading a joint study between Farming Connect and Ibers into the use of this test on Welsh farms.

During the project potential mud snail habitats were surveyed on five farms – one dairy and four beef and sheep.

Farms were visited up to four times between May and October 2017, when wet habitats were repeatedly surveyed.

Water from the habitats was filtered through DNA-capturing filters, which were then screened for the presence of mud snail. Meanwhile, livestock groups infected with liver fluke and rumen fluke were identified using faecal egg counting (FEC). 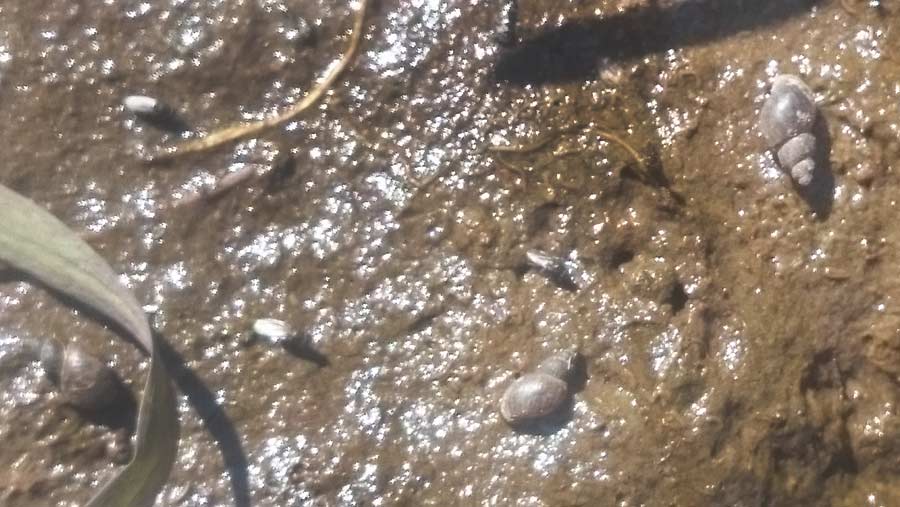 The test identified mud snail DNA in each habitat where snails were physically detected and in other habitats where no snails were seen.

“The test also picked up both liver fluke and rumen fluke DNA in mud snail habitats which is also promising as we look to develop this test further in future and use it to assess fluke infection risk in fields,” explains Dr Williams.

Each of the farms was given a detailed map assessing fluke infection risk in each area.

Rhys Jones, who was involved in the research during his PhD, adds: “It’s hoped these maps will assist farmers in making informed livestock management decisions in consultation with their vet to assist with fluke control.

“Interventions to reduce contact between livestock and fluke on pasture such as fencing and draining can be costly and being able to specify and prioritise which habitats pose the most immediate risk should be valuable information to manage fluke risk in the future, especially as the threat of anthelmintic resistance grows.”

Of the five farms involved in the latest research, some have since fenced off newly identified mud snail habitats from livestock, as well as adapting their fluke control programme to test livestock in the spring to ensure animals shedding fluke eggs on to mud snail habitats are identified via FEC testing and treated.

This study comes two years after a team from the Institute of Biological, Environmental and Rural Sciences (Ibers) at Aberystwyth University  – a Farming Connect innovation site – published research on the prevalence of rumen fluke on Welsh farms.

That study, based on a survey of 100 farms, found:

Both liver and rumen fluke were detected at Hafod Farm near Llandysul, with levels of rumen fluke the highest recorded by the research team.

Six snail habitats were identified at this 49ha dairy farm, which Liam and Annie James farm in partnership with Annie’s father, Clive Lott.

Snails in three of these habitats were infected with liver fluke and rumen fluke infection was detected in snails in two of the sites.

“Given the number of snails seen in the habitats and the sizeable nature of these habitats it would be reasonable to conclude they pose a significant risk of infection to livestock grazing the surrounding areas,” says Hefin Williams, a lecturer in agricultural environment at Ibers. 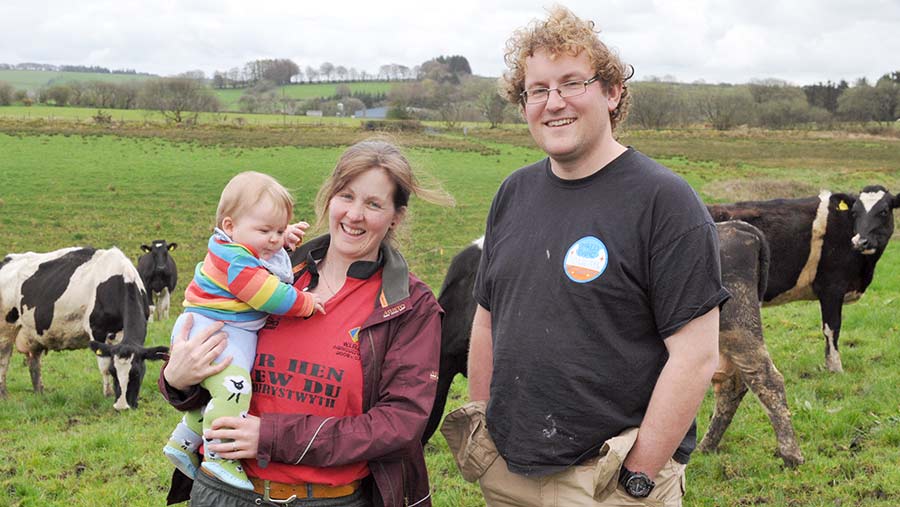 Liam and Annie James with their daughter Buddug

The family are in their fourth year of farming at Hafod and, although they are aware that poor drainage has resulted in some very wet areas, they were completely taken aback by the sampling results.

“We’d had reports from the abattoir of liver fluke in a couple of cull cows, but we were completely unaware we had rumen fluke in the herd,” says Mr James.

“Liver fluke and juvenile stages of rumen fluke can affect milk yield, but you wouldn’t be able to tell by looking at a cow whether she was infected.”

The study has been valuable on two counts. Instead of using a flukicide that treats only liver fluke, a product that covers both rumen and liver fluke is now administered during the dry period.

The family is also able to prioritise which areas to drain and fence off from livestock.

“We have put some temporary fencing up as a short-term measure,” says Mrs James.

The farm has required a lot of investment, but she says this study has shown that fencing and drainage in certain high-risk areas must be a priority.

“It is not going to be a magic fix, but the awareness and the changes we are putting in place should help.”

Mr James says that dealing with the fluke issue should lift milk yields.

“Getting on top of the problem will require investment but some of the work should pay for itself if we can produce more milk.”