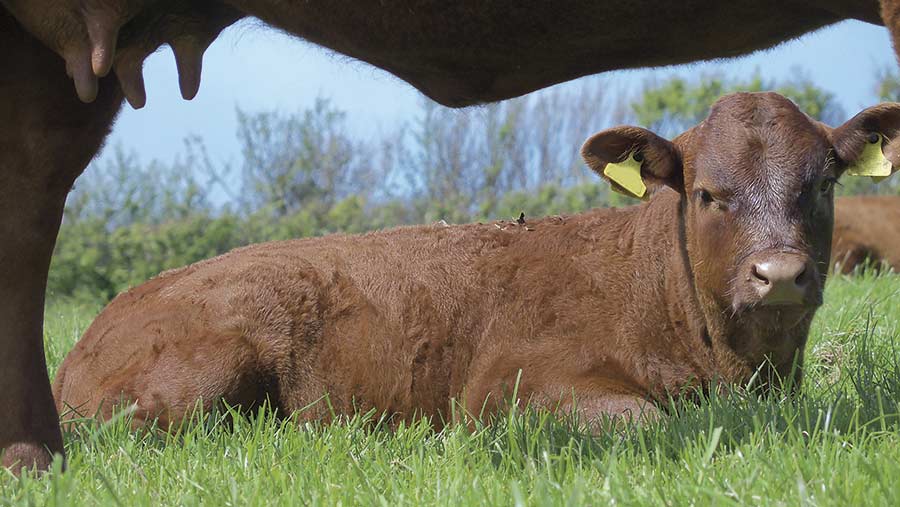 A Cornish beef farmer has been left devastated after an epidemic of neospora wiped out three pedigree home-bred blood lines.

Cattle infected with the parasite are seven times more likely to abort than uninfected cattle – illustrating just how prevalent the disease is becoming.

Juliet Cleave and her husband became aware of a neospora problem on their farm near Bodmin, Cornwall in 2010, though in hindsight there was evidence of an issue long before then.

See also: Q&A: Advice on how to tackle neospora in cattle

“Seven years ago, we had a heifer slip a calf,” explains Mrs Cleave. They carried out a brucellosis test, which surprisingly revealed the true cause of the problem – neospora.

They have a strict culling policy of empty cows so decided against going to the expense of whole herd testing and she added that, at the time, they were naïve about keeping back females from the bloodlines.

The problem continued to spiral within the herd and, in autumn 2015, seven spring calvers came bulling post-housing – despite positive pregnancy tests – triggering the decision to finally whole-herd test for neospora.

While this was an expensive route, it was worth it from a management point of view to find an answer to the multiple abortions.

“Being pedigree breeders, our ultimate goal was to sell breeding females, so we had to find an answer to what was going on,” says Mrs Cleave.

“The test showed two-thirds of the herd was positive – meaning that three family lines out four that we home-bred will eventually be wiped out as we can’t breed from the daughters.”

Ironically, the farm had invested in being part of a high health scheme for the past four years – going as far as bagging their own dog faeces – and not testing sooner is Mrs Cleave’s biggest regret.

“If we had tested earlier, we wouldn’t have let the problem mushroom, or kept home-bred replacements,” she says. “Instead we could have kept positive cattle on as a commercial herd – rather than keeping them for breeding and increasing the spread of the disease.”

The plan for the farm now is to fatten all progeny, except for the clean bloodline, and when everything is gone, to regroup and decide where to go from there.

While we could keep a commercial herd, that doesn’t fit with our system. My husband is just past retirement age and I’m in my 50s – we have no successors and don’t have enough working life to invest and rebuild what we have lost. There is no point putting a sticking plaster on a broken heart. Mrs Cleave

It is a misconception that being a closed herd eliminates the risk of neospora – this is not always the case, says Mrs Cleave. “Even if you’re a closed herd with good biosecurity, you are still at risk unless the neospora threat is actively managed. If you haven’t thought about it, the door is still open.

“It is also important not to rely on lack of public access over your ground as there are other routes in. We have no footpaths running through the farm and believe the disease entered via foxes as we are in a highly populated area.”

While infected cows have cull value, this is marginal in comparison to their pedigree worth and certainly does not factor in consequential loss.

“Because we were breeding our own replacements, losses had a knock-on effect and have diminished our numbers,” says Mrs Cleave.

“On a personal level, I feel as if I’m having an identity crisis – I don’t know who I am without my cattle. My husband and I have watched a lifetime of work just completely wiped out.”