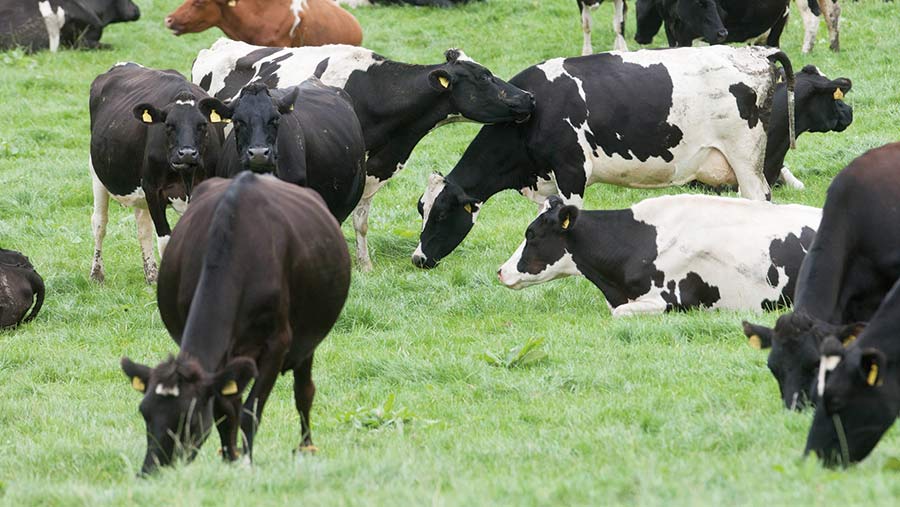 When Jonathan Lovegrove-Fielden decided to covert Longden Manor Farm back to an organic autumn-block and expand to 300 cows his farm manager, Colin Bowen, knew they would have to buy-in cows to facilitate the move in a reasonable timeframe.

But having made good progress in reducing the prevalence of red and yellow Johne’s cows within the herd from 9% to 1.5%, he was keen not to undo the farm’s hard work.

The farm had begun whole herd testing for Johne’s some two years earlier, in April 2014, with tests carried out every quarter as part of their milk testing regime.

Although it wasn’t a requirement of their milk contract at that time, Mr Bowen believes that further down the line milk buyers could create a two-tier milk market and wanted to get ahead of the game.

“Bulk milk testing is still being offered to people, but it is a complete waste of money. For a tank not to be low you need a minimum of 15% of cows in the herd to be a high [risk]. So, a lot of herds that did bulk milk test came back negative and thought they were fine.

“But the number of herds that are false negative is massive and by the time they go positive you have to dig yourself out of a massive hole.”

As well as converting to organic, they decided to streamline their system and reduce labour by getting rid of their spring block of cows and becoming a solely autumn block.

Being short of numbers and not wanting to extend their autumn block any further by rotating cows from spring to autumn calving, their only option was to buy in.

Their shopping list was extensive; cows had to be organic, good health status and autumn calving, which left them with limited vendors.

The first bunch of 13 animals was purchased this spring and as the herd they were buying from had limited Johne’s data they decided to pay £5-6 a head to blood test the animals for the disease during the pre-movement TB test.

“The Johne’s risk was accepted and it meant that if any cows were Johne’s positive they could then be managed as such. If you’re going to have to buy something you buy with as much information as you can,” says Mr Loewenstein.

“I think as an industry we are very poor at asking questions. You wouldn’t buy a car without test driving it, but we do buy most stock without knowing the disease history.”

Questions to ask when buying in animals:

Even though only three animals tested Johne’s-positive, all animals were treated as yellow rather than run the risk of them joining the herd and failing a test at a later date (see box: “six ways they have controlled Johne’s spread”).

Another 23 milkers and 13 bulling heifers were bought in September, but this time extra precautions were taken with lessons learned after buying in the spring.

“We looked for herds that had done a more significant level of Johne’s investigation and requested results for all of the animals we were interested in,” says Mr Bowen.

As a result, none of the animals bought in had a positive test, although animals were kept in isolation for four weeks after arrival and were milked separately to limit contact with the main herd. During this time, they were vaccinated for BVD and IBR.

This approach, while not bullet-proof, has helped the herd manage the risk and as a result keep the number of red cows within the herd constant.

In the next three years, they hope to be milking 300 cows at Longden Manor and have surplus replacements to sell for a premium.

Mr Bowen hopes that being organic and having a good disease status will make them attractive to other organic herds.

So, what’s his one piece of advice for other farmers starting their Johne’s journey?

“Don’t try and do it all at once. Gradual improvements are a lot easier to manage than trying to have a big impact at the start.”

At a sub-clinical level, it affects the immune systems and results in poor fertility, lower production, and other disease. It is spread through muck, milk, colostrum and in the womb.

It is closely related to avian tuberculosis and therefore, can affect the top lump on the TB test.