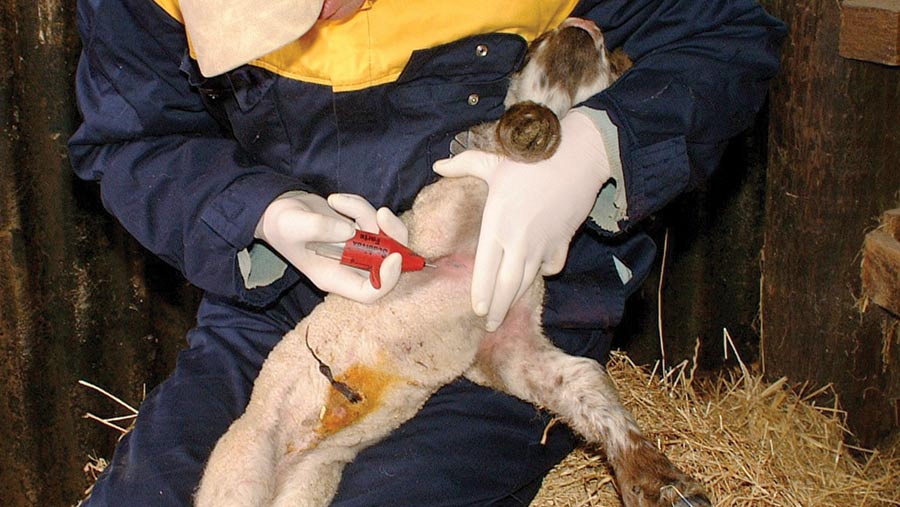 About one in five lambs – 900,000 – are affected by the highly contagious orf virus in England’s sheep flock each year according to MSD Animal Health.

Added to that figure, the virus, which causes scabs and blistering at the site of infection, is prevalent throughout the wider UK flock.

The disease often occurs around the lamb’s mouth, reducing its ability to feed and causing economic costs to mount.

Estimates suggest financial costs associated with orf range from £1.06 a lamb to as much as £14.03 a lamb.

But, despite the significance of the disease, many farmers are failing to protect flocks – a survey of 570 UK sheep farmers carried out by the University of Nottingham last autumn (2018) revealed the orf vaccine wasn’t being used effectively.

Responses showed 36% of farms were using the vaccine. But only a quarter of farmers (27%) were administering it correctly – under the front leg in an area of bare skin called the axilla.

More than a third (37%) said they used the vaccine up to a week after opening the vial, yet its shelf-life is just eight  hours. This is because it is a live vaccine and its efficacy diminishes quickly once the vial is opened.

Because it is a live vaccine and contagious to humans, it is vital to wear protective gloves. However, only 53% of farmers said they used gloves when vaccinating sheep and only 31% washed their hands just before and immediately after vaccination.

One in three farmers also used the vaccine on ewes too close to housing and lambing time. The product should not be used within seven weeks of lambing to allow immunity to build up.

One of the survey organisers, Wendela Wapenaar from the School of Veterinary Medicine and Science at the university, said the results showed further practical advice was needed.

“We want to be able to help farmers use the vaccine properly and address any misunderstandings about best practice.

“It is important that the vaccine is administered according to instructions, which means via a scratch to the skin under the front leg using a proprietary applicator,” says Dr Wapenaar.

MSD Animal Health – manufacturer of the Scabivax Forte vaccine – has provided a list of dos and don’ts and a step-by-step to help farmers use the drug correctly.

It has also produced a video demonstrating how to administer the vaccine to ewes. Watch the video and read the guide below.

How to vaccinate lambs against orf

The vaccine can be used to protect lambs from one day old and ewes, providing they are vaccinated seven to eight weeks before lambing. 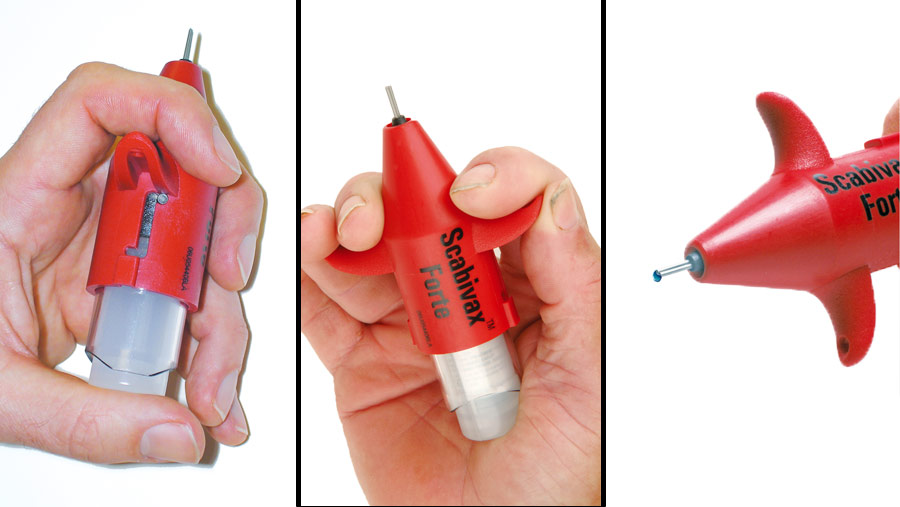 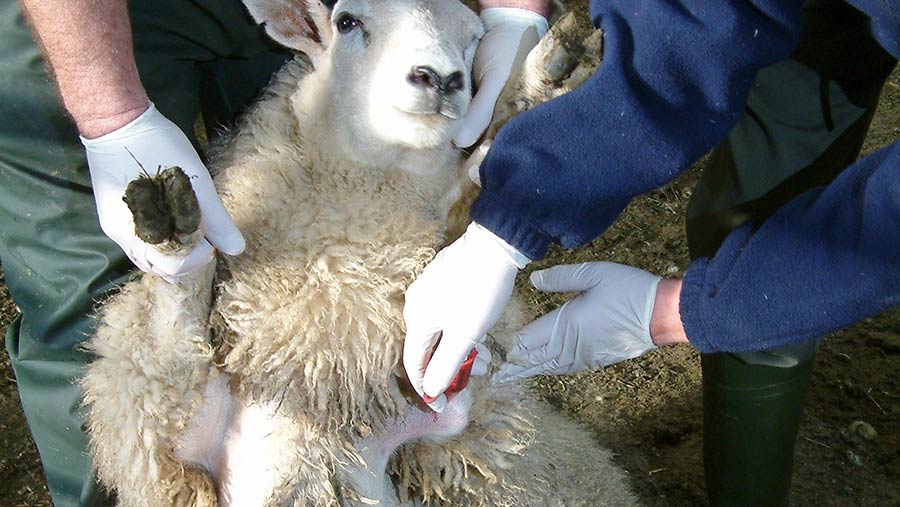 4. Check the vaccine has taken

Beef and sheep farmer Pauhla Whitaker witnessed the impact of the orf virus five years ago when 30% of the year’s lamb crop contracted the disease.

Mrs Whitaker runs 390 breeding ewes on an organic set-up at Overtown Farm, Cranham, Gloucestershire, in partnership with her husband Martin.

Orf had been an underlying problem on the unit but it suddenly got worse in 2014, she explains.

Lambs showed the typical, scabby lesions around their mouths and stopped suckling because of the pain caused by the open wounds.

The highly contagious disease then spread to many of the ewes’ udders which meant lambs were being rejected and were going hungry.

“The lesions allowed in bacteria, and mastitis levels almost doubled. Normally we would expect to replace 20-25 ewes because of mastitis issues. But in 2014 we culled 45 because of the disease.” 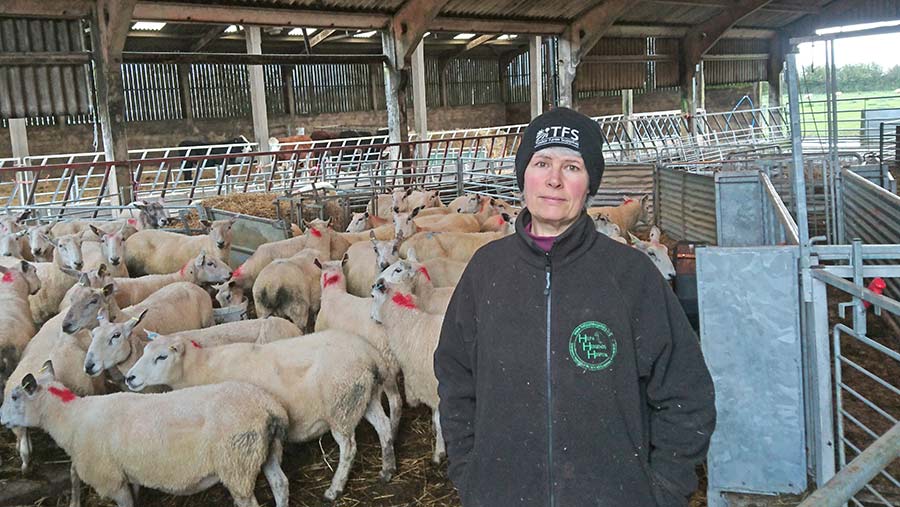 “We had to use antibiotics to tackle the infections which, on an organic farm have a much longer withdrawal period.

“Soil Association rules at the time insisted on a withdrawal period for the penicillin-based treatment three times longer than the recommended 31 days,” Mrs Whitaker says.

That period has since been reduced to double the conventional but it is still potentially a significant delay in marketing lambs, she points out.

With all of those problems and the increased labour time taken up, Mrs Whitaker decided to vaccinate the flock ahead of the next lambing.

After a discussion with the vet, Mrs Whitaker adopted a two-pronged vaccination programme for the flock. Ewes were scratched in the axilla under the foreleg at scanning to allow plenty of time for the live vaccine to “take”; usually seen as a line of scabs along the scratch site.

These scabs are infective so need time to form and drop off before housing (by seven weeks after vaccination) when they can infect lambs.

The second phase is to vaccinate all lambs at 72 hours old ahead of turnout. The programme has been a success and no ewes or lambs contracted the virus in the following years.

However, last year vaccination was interrupted by snow. The virus returned immediately to infect about 30 lambs.

“It was a wake-up call which has convinced us we need to keep vaccinating each year,” Mrs Whitaker adds.