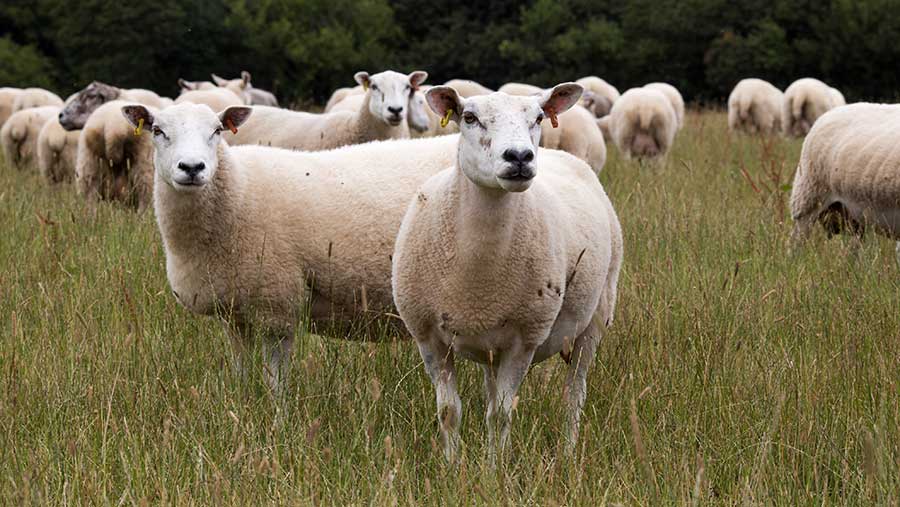 ‘Iceberg diseases’ is the term used to describe diseases that are reported in fewer numbers than actually exist.

Sheep industry experts are particularly concerned about the risk of five such diseases at the moment, which pose a threat to the sector:

Nottingham University clinical lecturer Dr Peers Davies has been leading a year-long project looking into these diseases and the requirements for the UK sheep industry to enable it to cope with them.

As part of this, AHDB Beef and Lamb, which funded the project, is now running ‘train the trainer’ events to further inform vets about the latest updates on the diseases.

Hayley Parrott went along to one of these workshops to ask Dr Davies more about each of the diseases and what farmers need to know.

What is it? A viral disease that can be transmitted via milk, colostrum, faeces and respiratory secretions. Close contact during housing can increase the risk of disease spread.

Symptoms The name is made from two Icelandic words that mean pneumonia and wasting – the main clinical signs.

Impact on flock The disease is highly contagious and fatal, so will lead to increased mortality rates.

Infected flocks are likely to see increased culling due to chronic weight loss and poor fertility. New UK data has shown an approximate 7.3% reduction in milk yield from infected ewes.

How to find out if you have it on farm Maedi visna can be identified through blood testing or milk sample testing.

How to prevent it There is no vaccine for the disease. You can reduce the risk of infecting your flock by purchasing breeding stock only from Maedi visna-accredited flocks.

How to control/treat it There is no treatment for Maedi visna.

What is it? A bacterial disease, which usually infects in early life. It is caused by the same mycobacterium avium subspecies paratuberculosis (MAP) as cattle. Little is known about the UK sheep strain of the bacterium.

The disease can be passed between animals through the faecal/oral route, on contaminated ground or from the milk of infected ewes.

It is usually acquired within the first four months of life. Older animals are more resistant to infection as the gut develops.

Symptoms Chronic wasting and poor, open fleece. It is typically seen in three- to four-year-old sheep.

Bottle jaw – where fluid accumulates under the jaw – is seen in extreme cases.

Lambs born to ewes in the terminal stages of the disease may have birth weights as low as 2-3kg.

Impact on flock Johne’s in a flock can lead to an annual ewe mortality rate of 10%. A trial looking at MAP status and ewe longevity has shown that flocks with MAP infection typically have a smaller proportion of animals over three years old.

Testing is challenging because of the lack of knowledge of the bacterium strain that affects UK sheep.

It can be done by looking for antibodies in the sheep, but this is only accurate in the very late stages of disease, so identifying if an animal is infected in the early or incubation stage is very difficult.

Pooled faecal samples can be tested from high risk animals (thin ewes over three years old with a full mouth) for the presence of bacteria. This needs to be sent to a laboratory via a vet.

How to prevent it Vaccination has proved to be very effective in Australia. This is age-dependent, though – exposure in the first three to six months presents the highest risk of infection, and vaccination at an early age is required for greatest efficacy.

How to control/treat it There is no effective treatment. Therefore, if all other diagnoses are ruled out and Ovine Johne’s disease is diagnosed, the infected sheep should be culled.

What is it? A chronic bacterial disease

Symptoms The disease, which can spread between goats and sheep, can present differently depending on the strain, which varies from country to country.

Clinical signs of disease in the UK are abscesses in the surface lymph nodes of an animal, particularly around the ear, jaw and legs.

These are superficial lymph nodes and this disease is described as cutaneous caseous lymphadenitis. Spread to the lymph nodes in internal organs leads to the visceral form of the disease.

Impact on flock Caseous lymphadenitis is contagious and can be spread through damaged skin, such as at shearing time, but also through oral ingestion of bacteria. Skin lesions as a result of fighting may aid disease transmission between rams.

How to find out if you have it on farm The disease can be identified by a blood test, showing exposure to the bacterium Corynebacterium pseudotuberculosis.

It is possible to get a false negative from a very sick animal, so a lab test for the bacterium is required to confirm infection.

How to prevent it Strict biosecurity can reduce the risk of disease, including keeping any equipment clean for practices such as shearing or dipping.

Additionally, biosecurity when it comes to buying in stock is important, including:

How to control/treat it Although the bacterium is sensitive to some antibiotics, the location of it often means treatment is unsuccessful.

Vaccination is used in some countries. Importation of the vaccine Glanvac can be done via your vet and case reports of use indicate good efficacy.

Autogenous vaccines can also be produced in the UK for specific farms.

A test and cull approach is most effective to eradicate the disease from infected flocks.

What is it? A viral disease that impairs lung function due to a lung tumour replacing the normal lung structure and sometimes secreting fluid.

Rapid breathing when resting is one clinical sign and susceptibility to bacterial pneumonia can lead to sudden death despite antibiotic treatment.

The fatal disease is contagious and can spread via aerosol transmission as well as through colostrum and milk.

Incubation of the disease could take months or years and clinical signs are typically seen in three- to four-year-olds, but sometimes in sheep less than a year old.

Impact on flock There are case reports of forced culling in endemically infected flocks of up to 20% in sheep as young as two years old.

However, a more typical presentation would be a larger number of thin older ewes being culled prematurely because of the insidious disease.

How to find out if you have it on farm Post mortem examination of the lungs is the best means of confirming ovine pulmonary adenocarcinoma.

Sheep do not produce antibodies in response to infection, therefore blood tests will not pick up the disease.

Transthoracic ultrasound examination has proved useful in detecting ovine pulmonary adenocarcinoma prior to symptoms, but more data is required to understand its limitations.

How to control/treat it There is no vaccine for the retrovirus that causes the disease. Because of its contagious nature, it is important to remove infected sheep from the flock as soon as possible.

What is it? This virus is similar to BVD in cattle

Lambs may also be born with hairy fleeces, unusual conformation and prone to shaking – the ‘hairy shaker lamb’ presentation.

Ewes infected during pregnancy that do not abort may produce persistently infected (PI) lambs. PI lambs may show a slow growth rate and reduced fertility and increased risk of early death.

The virus can be spread horizontally, from sheep to sheep, or vertically, from ewe to lamb via the placenta or milk.

Impact on flock A very high empty rate at scanning may be the first sign that the disease is present. In subsequent years, the reproductive impact reduces to a low grade endemic level.

How to find out if you have it on farm A blood test can confirm the disease.

How to prevent it Keeping a closed flock will help prevent the disease getting in via bought-in stock.

However, for flock purchasing replacements, bought-in ewes should be tupped separately and kept apart until lambing time.

Ideally such farms should purchase from a known source and test stock for exposure to border disease before buying.

Rams and other bought-in stock can be blood tested before they are bought or quarantined until declared free from infection by a blood test.

Currently there are no licensed sheep vaccines for border disease.

How to control/treat it PI animals, which can be identified by a blood test for the virus, should be removed from the flock.

Transmission of disease between sheep and cattle

Both border disease and Johne’s can be passed between cattle and sheep, although it is not currently clear how much of a risk one species is to the other.

It is important, though, on a mixed farm, that control of these diseases is carried out across both sheep and cattle, particularly if the farm is part of a BVD-free or Johne’s eradication scheme.