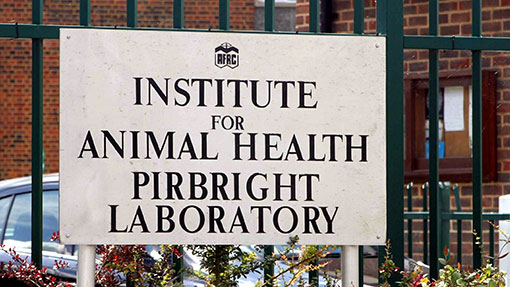 The government’s disease research centre at Pirbright has been ordered to pay fines and costs totalling £77,000 for safety failings during foot-and-mouth experiments (F&M).

The Pirbright Institute in Surrey was at the centre of the 2007 F&M outbreak after leaking drains at the research site were identified as the most likely source of the disease.

The site is regulated by the Health and Safety Executive (HSE) which said the latest two incidents, in November 2012 and January 2013, involved the airflow into and out of parts of a facility housing infected animals.

The HSE stressed that neither incident resulted in the release of the disease to the external environment. But the HSE added: “The shortcomings in control and non-compliance with licence conditions were considered serious enough to warrant legal action.”

The hearing at the City of London Magistrates’ Court took place on Wednesday (30 April). The court heard the two incidents occurred when a ventilation system was operated incorrectly. The system was designed to manipulate air pressure to ensure it moved from clean areas into dirty ones before being filter-cleaned.

“Any changes to operating procedures at a facility of this kind have to be properly planned, assessed and agreed in advance with HSE and DEFRA,” a spokesman for the executive said.

“But that didn’t happen and protective measures were compromised.”

The spokesman added: “Crucially, on the first occasion, there was no effective alarm system to warn staff working in the animal room about the loss of negative air pressure. This meant the existence of the November incident did not emerge until an investigation was carried out into the later January incident.”

“Our investigation identified failings with the Pirbright Institute’s management arrangements and controls for undertaking a series of experiments with foot-and-mouth disease virus.”
Dr Simon Warne, HSE

The Pirbright Institute, of Ash Road, Pirbright, Surrey, was fined a total of £22,350 and ordered to pay a further £50,000 in costs after pleading guilty to eight breaches of the Specified Animals Pathogens Order (SAPO) 2008.

Speaking after the hearing Dr Simon Warne, a principal specialist inspector from HSE’s biological agents unit, said: “At facilities where research is undertaken with foot-and-mouth disease virus it is imperative that control measures are applied in a rigorous way. In common with other sites that pose major or significant hazards, either to people or the environment, there needs to be protection in depth.

“This involves having a number of protective measures, with each one providing some degree of assurance in the event of other failures.”

“Our investigation identified failings with the Pirbright Institute’s management arrangements and controls for undertaking a series of experiments with foot-and-mouth disease virus. While the foot and mouth disease virus was not on these occasions released to the outside world because of the multiple levels of protective measures in place, the failings were still significant.

In a statement the Pirbright Institute admitted that “certain institute processes and actions had fallen short of the standards that public, partners and the institute itself expects”.

“The institute pleaded guilty to the charges, accepts full responsibility and apologises for the failure to comply with SAPO requirements,” the statement added. The incidents did not cause any release of virus. No issue of human health was involved.”