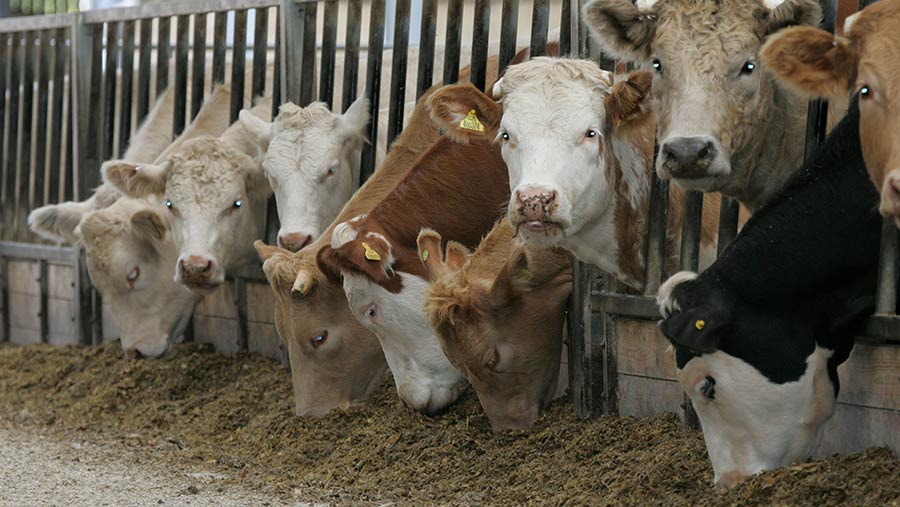 Endoparasites pose a significant threat to cattle health and performance, with the presence of worms causing a reduction in appetite which leads to poor growth.

Worms can be challenging on farms, so treatment plans should be reviewed each year, taking into account the farm’s location, disease history, the season and the age of stock.

The risk of infection varies, so having better management and effective use of anthelmintics means the impact of parasites and risk of anthelmintic resistance can be limited.

Should all cattle be treated for worms, lungworm and fluke at housing? And why?

It depends on the age of stock, grazing history and if there has been a history of parasite problems on the farm. Cattle in their first and second grazing seasons are the main group at risk to gut worms.

See also: A guide to effective wormer use to to reduce resistance risk

Adult cows acquire immunity to gut worms by exposure on pasture so shouldn’t need doing. However, immunity to lungworm is short lived, so any age of stock can be affected, and there is also no age of immunity to liver fluke.

Worming at housing can be a useful, low-risk option to deal with the worm population. It’s seen as a good time to cover all bases, keeping the animals worm-free over winter.

Are the risks of parasites lower this year because of the dry weather?

In dry weather, the level of infective larvae on the pasture is lower because the eggs and larvae remain dormant in the faeces and can’t migrate on to the pasture until rainfall has occurred.

But when it rains, there is an increased risk of cattle being infected, due to the larvae being washed from the faeces and on to the pasture.

When should treatment be carried out?

Treatment for worms can be carried out at housing, with the products used generally having positive activity against all worms.

Fluke treatments may have to wait, depending on the flukicide used, with different products working against different stages of fluke. For example; if the product used only kills adults and immature fluke over eight weeks of age, then cattle should be housed eight weeks before treatment to ensure that the right age of fluke is being removed.

Which product should I use? Will one treat all three?

There’s a wide range of cattle wormer products available, so it’s important to use a product which will deal with the type of worm burden that you want to treat for.

Combination products treat all three, but it is important these are used correctly. However, it’s advisable to avoid white and yellow wormers at housing – this may not work against the dormant stages of some gut worms.

How do I ensure cattle are getting the right dose? Should I dose to the heaviest or lightest?

Estimating weights by eye is inaccurate, so ideally, all cattle should be weighed (using scales) individually for their live weight, helping to prevent underdosing or overdosing. The wrong dose can lead to the worming product being ineffective or creating toxicity issues. However, if a group of well-matched cattle are to be treated together, it is acceptable to weigh a sample of animals and treat according to the estimated weight for each animal.

Resistance to anthelmintics is growing. How do I check to ensure the treatment has worked?

The most effective way to check the treatment is by doing a post-dosing faecal egg count (a post-drench test). Pooled faecal samples are taken from 10 members of the herd that have been grazed together, usually one to two weeks post-treatment.

Be aware that this test won’t determine if the wormer has been effective against some hibernating worms – such as those that cause type II ostertagiasis.

If it hasn’t worked, should I treat cattle again and should a different product be used?

It’s advisable to treat the cattle again, first making sure that the wormer is the right one for the parasite.

If you think the wormer has not been effective, an SQP or vet can advise on what further action should be taken.

Following the first treatment, will any follow-up treatments be required before turnout?

If an effective parasite control has been given then no further action is needed. However, depending on the parasite control program, a treatment may be needed at turn out, to limit the contamination of worm eggs in their new pasture.

Common mistakes that can result in product failure