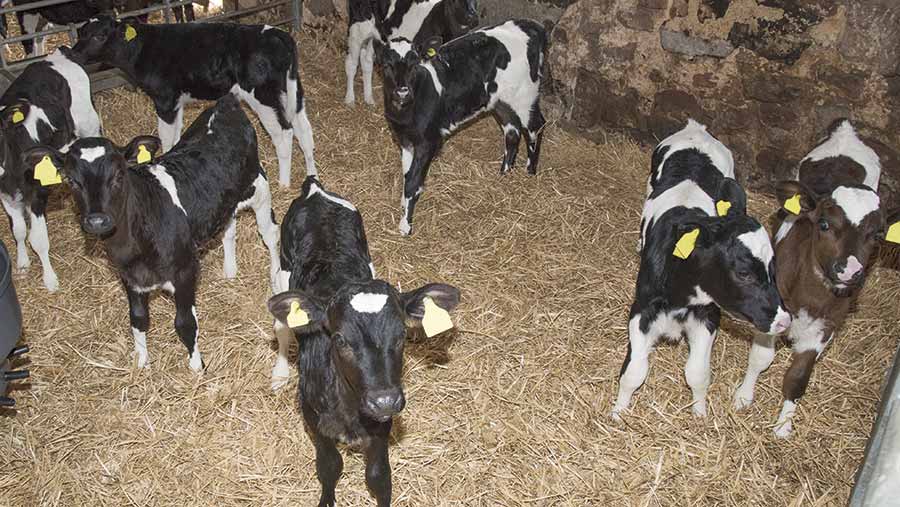 Coccidiosis is an intestinal disease usually seen in young beef and dairy calves aged between three weeks and six months.

Infection is chiefly dependent on the level of challenge they face and their immune status.

Failure to control the disease can have an effect on future productivity levels, including growth rates, and can delay the onset of puberty, leading to milk loss production in dairy calves.

However, tactical use of licensed products and methods to reduce environmental contamination can help keep its cause – predominantly the protozoal parasite Eimeria – in check.

See also: 10 things you may not know about coccidiosis

It is caused by the protozoan Eimeria. The Eimeria parasite is widespread and it is likely that most dairy and beef calves will acquire infection at some point.

There are 13 different types of Eimeria species, but the three most harmful and pathogenic are Eimeria bovis, Eimeria zuernil and Eimeria alabamensis. Each species of Eimeria is host-specific, with no cross-infection (cattle cannot infect sheep and vice versa).

The lifecycle of Eimeria is a complex one, with the parasite undergoing many cycles of multiplication, causing extensive gut damage in the process.

The calf ingests infective oocysts from their environment, usually shed from the faeces of an infected animal.

Once the oocysts are in the calf, they release cells called sporozoites, which enter the lining of the intestine and multiply rapidly, until they develop into oocysts, which are then excreted back into the environment in the faeces.

One oocyst can give rise to many thousands more, taking between 16 and 21 days to achieve this.

The development of disease in calves is dependent on many things, including parasite, host  and environmental factors.

Calves with clinical coccidiosis present with watery scours containing blood and mucous; often the calf is seen to strain to pass the faeces and in severe cases, scour may contain strips of the intestinal mucosa.

Subclinical coccidiosis is much more common, and occurs when the coccidial challenge is lower, or when the calf has developed some immunity against the parasite.

Often, the subclinical signs show as:

Can it often be mistaken for other diseases?

Yes, as there are several causes of scour in calves. However, these mainly occur earlier than the three weeks when coccidiosis presents. The main diseases coccidiosis can be mistaken for include cryptosporidium, rotavirus, coronavirus and salmonella.

The main symptoms of coccidiosis are subclinical signs such as not growing well and looking dull and malnourished, so pneumonia and poor feeding could also be mistaken for the condition.

How can you get a correct diagnosis?

A veterinary diagnosis is required, with the veterinary surgeon taking into account the farm history, clinical picture and risk factors.

The symptoms the calf shows are often enough to be suspicious of coccidiosis. However, to be certain that an infection of coccidiosis is apparent, a faecal analysis is required from a number of calves in the affected group.

This diagnosis is based on the number of oocysts per gram in the faecal samples, and indicates which species of coccidiosis are in the faeces; as not all species of the Eimeria cause disease in calves.

Can it be treated and how?

All affected calves should immediately be removed from the suspected source of infection and if it’s likely one calf is affected, the rest of the group might be too.

It’s advisable that the whole group should be treated the same, as failure to do so could cause reinfection.

Products that contain the active ingredient decoquinate or toltrazuril are licensed products that can be used in the treatment and prevention of coccidiosis.

Decoquinate works early in the Eimeria lifecycle, destroying them during the infectious stages. Sadly, it is not as effective in calves that are already infected, so it is imperative to administer it before the onset of the risk period.

Toltrazuril will destroy the parasite in the later life stages when it’s in the intestinal cells and helps to reduce pasture contamination.

Treatment is best given during the period between exposure and the onset of clinical signs, as this will allow immunity to build up before excessive damage is done to the calf’s gut lining.

Strategic treatment with an effective anti-coccidial is a good prevention, based normally on timing of suspected exposure and knowledge of any previous outbreaks on the farm.

Products containing the active ingredient diclazuril can be used as a preventative measure for calves.

The level of challenge depends on the level of oocysts that have built up in the environment. Therefore, good hygiene plays a major role in preventing and controlling coccidiosis.

Water and feed troughs should be cleaned and emptied on a regular basis and all bedding kept clean and dry, with hay from contaminated pastures not fed to calves.

As with many calf diseases, good ventilation will help to reduce oocysts, as the build-up can be greater in warm and moist areas.

Older cattle are a big risk factor for spreading infection to younger calves, so it is advisable to avoid mixing age groups.

Finally, overcrowding at pasture and when cattle are housed should also ideally be avoided, as this could lead to stress and increase the risk of further infection.