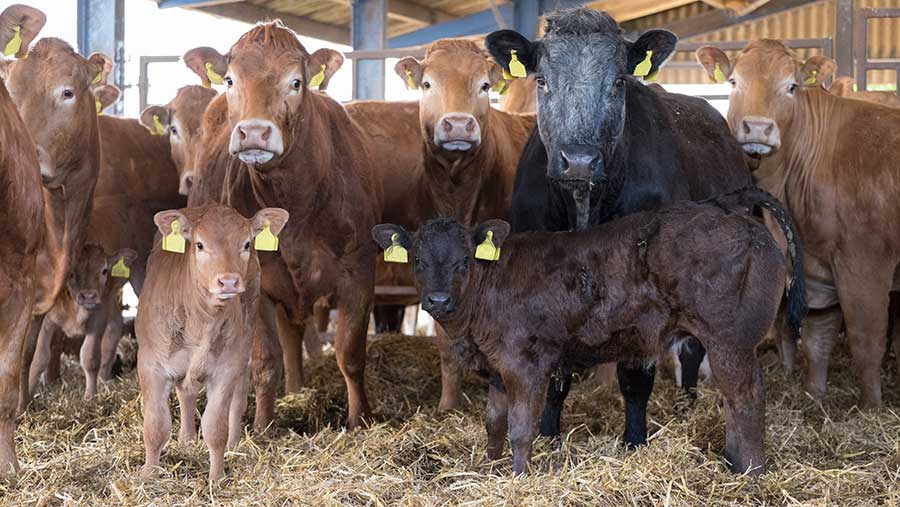 Infectious bovine rhinotracheitis (IBR) is a highly contagious respiratory disease. In serious cases, it can lead to pneumonia, particularly in calves.

Between them, the diseases can have a significant impact on beef cattle’s long-term health, which in turn affects herd productivity and profitability.

During a special beef cattle health workshop held by Derbyshire-based Scarsdale Vets, vet Emily Sycamore told farmers why being able to spot the signs of IBR – and acting quickly – is critical.

IBR is a viral disease that causes upper respiratory tract infections in young and old cattle.

A member of the herpes virus, it is endemic to the UK, with about 40% of the country’s herd likely to have been exposed to the disease at some point in their lives.

Once an animal has been infected with IBR, it will remain in its body for life. It will mostly remain as a latent or hidden infection, but can reactive after periods of stress.

The virus affects the nose, eyes, sinus, trachea and larynx, causing runny eyes and nose as well as rattling breathing sounds from the throat.

Infected animals will have high temperatures (about 41C) and will cough – especially if you touch their throat as the area will be inflamed.

They will also be depressed, off their food and will have bad breath due to pus in the larynx and trachea.

The virus can also present as reproductive disease in males and females. It’s less common, but it’s worth knowing that it can be passed from bull to cow during service.

What impact does it have on cattle?

Morbidity from IBR itself is quite low – if it gets into a herd then every animal is likely to get it, but only 2% will die.

However, the virus can cause secondary infections such as pneumonia (see ‘Calf pneumonia’, below), which can become more serious.

In chronic cases, where it progresses to pneumonia and animals have been off their feed, there can be weight loss. And in severe cases it can cause death, especially in naive herds.

How is it activated and transmitted?

Transportation is also a big cause, particularly when they have come through markets, where they can easily pick something up.

The stress of being transported will depress the immune system, then after a couple of days being on farm, farmers will start to see signs.

The virus is spread through nose-to-nose contact, and it can also be transmitted through the air by coughing and spluttering, or spread through sharing water troughs or feeding stations.

How do you find out if you have it on you farm?

Very often vets will look at clinical signs and the animal’s history to make a presumptive diagnosis, as the treatment for IBR is similar to pneumonia. However, knowing if it is a case of IBR is useful in prevention.

Blood tests identify antibodies that will indicate if the animal has been exposed to the disease in the past, but a single blood test won’t show whether it’s the cause of the current situation.

Only sequential blood samples at least three weeks apart that show a rising level of antibodies will indicate if it is causing a current infection.

Swabs from discharge to identify virus DNA can be the most effective diagnosis, provided the samples are taken early, before animals become infected with other diseases.

Closed herds have the best chance of keeping the disease at bay, but if you must buy-in cattle then only buy from known sources, and test and isolate the animals for 28 days before they join the herd.

Also, don’t share or hire bulls because that can be disastrous for IBR as well as other diseases.

Spread can be prevented by having good herd immunity., such as making sure calves have good colostrum so they are able to deal with infection.

Protecting herds through vaccination is also a good policy, but there are cases where caution is needed.

Marker vaccines allow us to differentiate between exposure and vaccination, however we have to be very careful with giving any IBR vaccine to AI bulls and bull calves.

AI studs will not accept any bulls that have the presence of IBR antibodies – even if it’s a marker vaccine -– which is worth remembering if you intend to go down that route.

How can it be treated?

If possible, isolate infected animals in a separate airspace and treat them with non-steroidal anti-inflammatory drugs (NSAIDs) to reduce the inflammation, high temperature and pain.

If animals have elevated temperatures, it is likely a there will be a secondary bacterial infection, which might require antibiotics.

Vaccinating infected animals can also help to reduce the amount of virus being shed.

IBR damages the small hairs that line airways and trap particles, opening the floodgate to bacteria that reach the lungs and cause pneumonia.

The issue can be particularly costly for calves, where the immune system is not yet fully developed.

According to Mrs Sycamore, the costs of pneumonia can be 2.5-times greater than the costs of the drugs used to treat them thanks to reduced growth rates, which leads to longer housing times and bigger feed bills.

It can also impact the wider herd, as seemingly non-infected stock can be compromised, too.

“About 35% of all animals will have had a clinical case of pneumonia where they get treated, but at slaughter 73% show signs of lung damage,” she says.

“There is a big discrepancy between what’s being treated and what’s been missed.

“All of those 72% will be showing reduced growth rates, which cost you money – for every 100 calves, you lose two animals’ worth of body weight.”

To address the issue, Mrs Sycamore says it’s vital to treat all calves showing signs of pneumonia quickly with antibiotics and anti-inflammatory drugs.

Lung repair can take up to seven days, so antibiotic treatment has to cover that period – either with a single, long-lasting dose, or multiple shorter ones. In terms of group outbreaks, animals in a single airspace should be treated.

As with all illnesses, prevention is always the best option, so making sure calves have the best start in life by giving them good-quality colostrum within 24 hours is essential, she says.

“If you are concerned that an animal hasn’t had enough, try to milk some off another animal or provide a powdered colostrum substitute.

“If you can’t breed your own animals, then make sure you buy from trusted sources.”

In terms of vaccination, the type used depends on what disease is circulating on your farm, so it’s worth getting blood samples taken to identify which antibodies are present.

“One of the biggest solutions is the environment,” Mrs Sycamore adds. “You can vaccinate all you like, but if the environment’s not right, it’s like putting a plaster on a gaping wound.”

The main factors to consider are moisture, fresh air and air speed – too much moisture supports microbial activity, promotes bacterial growth, and can increase stress and mastitis.

“The ideal wind speed is 0.2-0.5m/sec,” she says. “This relies on having good shed design, with inlets, outlets and a sloping roof of at least 17deg, which encourages the stack effect.

“If your farm doesn’t have that, then you can still make the best of your situation by installing fans where necessary, investing in calf coats, or providing areas where calves can take themselves to keep warm.”