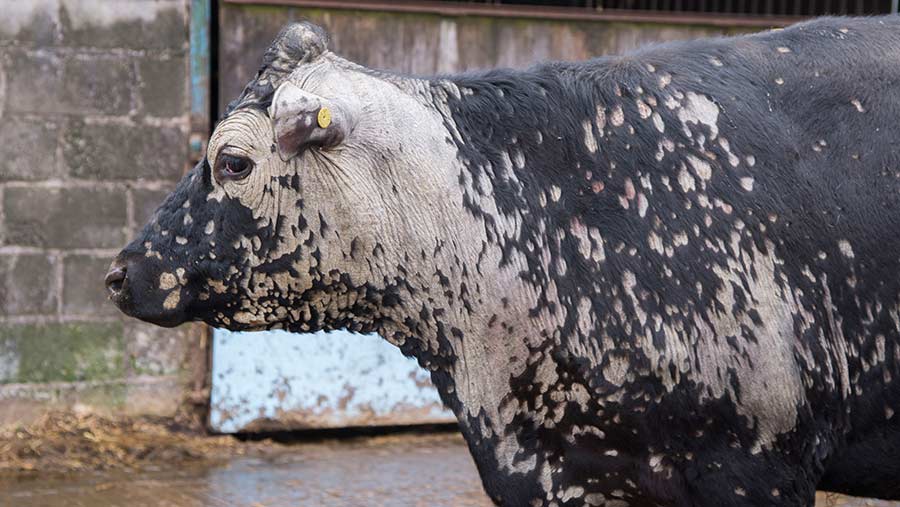 Ringworm is a very common and highly transmissible skin infection, passed between both cattle and humans.

It causes intense irritation and can affect growth rates and damage hides, but steps can be taken to prevent it.

Vet Keith Cutler of Endell Veterinary Group, Salisbury, Wiltshire, answers some key questions on the infection, explaining what causes it, the symptoms and treatment.

What is ringworm and what causes it?

Ringworm is a fungal skin disease caused most commonly by the spore forming fungi trichophyton verrucosum.

Cattle are the most commonly affected farm animal species. Affected animals usually have roughly circular areas of hair loss where the skin becomes slightly thickened, crusty and flaky and greyish in colour.

These areas are often seen on the face, around the eyes and over the shoulders, although all areas of the body, including the udder, can become affected and the areas affected can be extensive.

Can it affect livestock performance?

Generally, the effect on performance is minimal, although affected areas are itchy and while animals are rubbing they will not be eating, which will affect performance and cause additional damage to their hides.

Rather than its effect on performance, the presence of widespread and extensive ringworm lesions among groups of cattle is often suggestive of an already debilitated state.

How should it be treated?

The in-feed treatments that were available years ago no longer are. Topical fungicidal washes containing the active ingredient enilconazole or similar are available.

These are effective, but only where they are applied and treating the whole animal is rare, so the disease often spreads to untreated areas of skin giving the appearance that the treatment may not be working.

The infection often resolves without treatment, due to the development of natural immunity and exposure to UV light from the sun after turnout, especially in less severe cases.

Does it take long to clear up?

If not treated, lesions can persist for a considerable period of time. Even if the causative fungus is treated and killed it will take several weeks, or perhaps months, for hair to regrow and the lesions to disappear.

Yes, ringworm is infectious. The causative fungus produces spores which can spread from animal to animal where there is direct contact; this is why the part of the face around the eyes, which often rubs similar areas on other animals when eating from troughs, is commonly affected.

Spores can also, however, be spread by indirect contact via fence posts and building partitions. Isolating affected animals, therefore, often fails to prevent spread of the disease.

Is it contagious to humans?

Yes, ringworm is contagious to humans, often causing an itchy, roughly circular patch of dry flaky skin with an expanding red margin in areas where clothing may rub; under the cuffs or collar, for example.

Treatment advice should be sought from your GP or local pharmacist, but often an anti-fungal cream, Canesten, containing fluconazole, will be recommended.

Is there a vaccination available against ringworm?

Yes, a vaccine, called Bovilis Ringvac, is available to protect cattle against ringworm and to hasten recovery.

Two doses of vaccine, with dose volume dependent on the age of the animals being vaccinated, are required to be given by intramuscular injection with an interval of two weeks between them. Immunity is achieved by three weeks after the second dose.

Hygiene is also important to reduce the challenge from infectious spores deposited by previously infected animals.

Perhaps of greatest importance is to ensure the general wellbeing of your livestock and that they are well fed so their own innate immunity can act against any challenge.