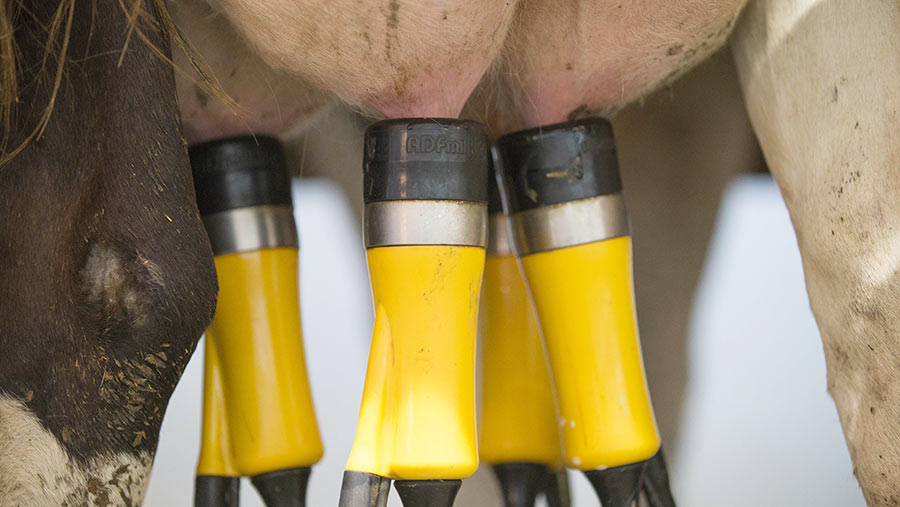 Adopting a series of protocols for housing, milking practices and genetic selection has removed the need to treat lactating cows with antibiotics in a high-yielding, housed dairy herd.

Lloyd and Daphne Holterman have reached a point where antibiotics are only used at drying off, but they are cautious about setting unrealistic ambitions for reducing antibiotics use.

“I think we should aim to reduce our use of antibiotics, not eliminate it altogether,” said Mr Holterman, who runs the 1,070-cow Rosy-Lane Holsteins herd in Wisconsin.

“To reduce antibiotics use, one practice has to complement another – you have to eradicate a disease first and then treat differently.”

His business focuses on disease prevention and good stockmanship skills and he shares his approach to reducing antibiotics use with us.

The Holtermans have bred for productive life instead of cow type since 1992, which Mr Holterman said has indirectly selected animals that are disease resistant.

Mr Holterman said his cows are healthier since he adopted a policy of less intervention at calving.

“When a calf is halfway out, we resist the temptation to assist straight away. We let nature take its course and as a result we get fewer tears, reduced metritis and fewer retained placentas and dead calves.”

The Holtermans  have eliminated Staph aureus and Strep uberis from the herd.

These gram-positive bacteria cause mastitis that require antibiotics treatment.

“To eliminate those you must have great staff skills to reduce the introduction of bacteria into the system,’’ added Mr Holterman.

“Train, train and train. You have to have good people; people who care. People who don’t like cows, your system or you should find a job they like better.”

The main mastitis bacteria he now deals with in the milking herd are E coli and klebsiella – gram-negative bacteria that have a much higher self-cure rate without antibiotics.

Cows are not treated with antibiotics for mastitis during lactation.

Instead, the aim is to detect it early and dehydrate, then rehydrate.

Cows are isolated and are given an intravenous therapy (IV) of hypertonic saline. This is followed immediately by an IV of four litres of electrolytes, and 40 litres of water with yeast is also pumped into the rumen.

This flushes toxins and rehydrates the animal.

As soon as she has recovered, the cow goes back to her social group so she doesn’t have to resocialise.

By taking a holistic approach to herd health, Mr Holterman said milk yield has improved by 800 litres a cow and veterinary and medicine costs have reduced from 1.8 cents/litre (£1.40) to 0.6 cents (£0.40).

But he advised farmers not to stop using antibiotics without consulting their vet.

“Pathogens on your farm will determine if you can go in this direction,’’ he added.