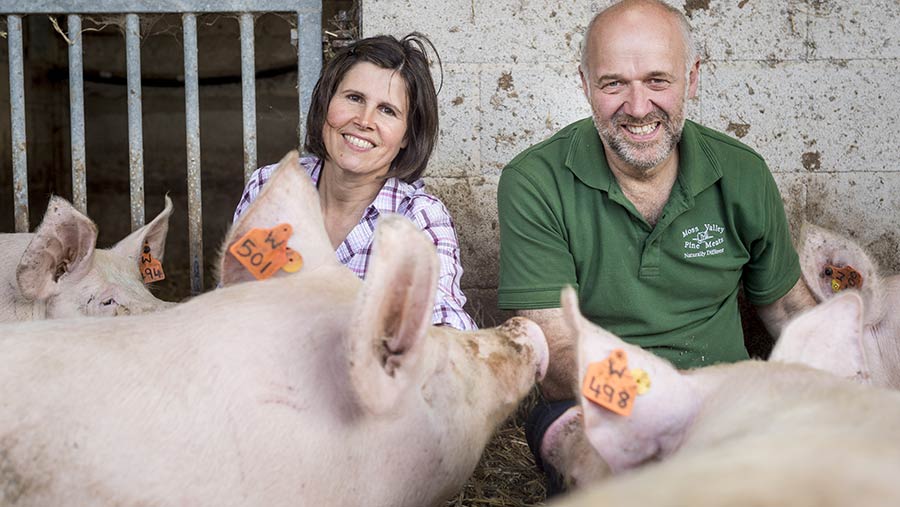 Having a low level of antibiotics use of 1mg/population-corrected unit (PCU) – compared with the industry average of 131 mg/PCU (2017) – may seem like a hard task, but for pig farmers Karen and Stephen Thompson this figure is achievable by simply paying attention to detail.

Until three years ago they were running at 6mg/PCU, but have been able to drive it down further by “making sure everything is in place for it to happen”.

The 200-sow farrow-to-finish unit has some buildings that date back to the 16th century, meaning the Thompsons have to work with what they have rather than relying on some of the latest building technologies.

Having done a degree in animal science, Mrs Thompson believes she is in a fortunate situation.

The Thompsons have always looked at alternative ways of managing situations rather than relying on the routine use of antibiotics in the herd. It means they have been open to trying new ideas and products to see whether they work.

“What you need to understand is when you use antibiotics, you are not only killing the bad bacteria, but also the good gut microflora. Sometimes this never fully recovers and can lead to more problems,” she says.

The Thompsons are lucky that their nearest commercial pig farm is five miles away and they are not down wind from it.

There are also no major roads passing the farm. “Isolation is a big plus, as it means we are not likely to pick up any airborne disease,” says Mrs Thompson.

Like many units, they also run a totally closed herd. The last time pigs were brought onto the unit was when they destocked and restocked in 1999.

This was to get rid of pneumonia. Since then they have been pneumonia-free for 18 years without any vaccination.

“This is the biggest factor in maintaining health. We are completely closed and also only have one source of AI,” she adds.

They also have a strict visitor biosecurity protocol, meaning they have to be at least three days pig-free. They also have to wear clothes and wellies provided by the unit. The same applies to their vet.

3. Managing diseases on the farm

It is easy to think the Thompsons aren’t troubled by disease with such a low rate of antibiotics use, but like every farm, they have some common ailments.

Vaccination plays a key part in managing most of the diseases. Sows are vaccinated for erysipelas, ileitis, and atrophic rhinitis and piglets for porcine circovirus (PCV) and parvo virus.

Until recently sows were also vaccinated for clostridial diseases, as they used to see some sow deaths. However, they have been using a probiotic live yeast in the sow feed, which has benefitted gut function.

Recently, vaccination of the sows for clostridium lapsed and they have not seen any clostridial disease issues in the sows in the past few months.

However, some clostridial scour has been detected in the piglets.

Mrs Thompson says: “As a result, we may reintroduce vaccination so the antibodies are passed on to the piglets at birth. Some farmers may be tempted to use antibiotics to treat scour, but it’s not the solution I like,” she says.

Piglets are weaned onto full-rate zinc, which is given for five to six days before going on a half rate for a couple of days.

Zinc is used to control bacterial growth, but is being phased out over the next five years to meet EU regulations, with the EU having banned its use for environmental reasons.

Mrs Thompson says: “It is doing a good job as we are not using any antibiotics at weaning, but the race is now on to find an alternative.”

In order to manage disease and protect gut health, cleanliness right through the system is paramount.

Moving to batch farrowing in 2015 has helped manage the system, as it now operates an all-in, all-out policy in each of the buildings.

It also means each building houses pigs of the same ages rather than of different ages, so there is no sharing of airspace or flooring with different age groups.

“Batch farrowing has definitely allowed us to manage groups of pigs of the same age better, as they don’t come into contact with older pigs, which aids disease control.”

The fully slatted system also makes it easier to pressure wash and disinfect between batches. Mrs Thompson explains: “Slats are not our complete enemy. They have a lot to add to pig health and welfare. However, the system is only as good as the person who runs it.”

In the past, they have housed some growers in straw yards and the effect on pig health was noticeable. “Growers in the straw yards never did as well and we had to treat individuals for scours,” she explains, adding straw isn’t as clean.

Reducing stress at weaning is critical to maintaining healthy pigs.

Pigs are weaned into batches of 50. The temperature in each room is kept steady, so they are not chilled, and the environment is spotless so they do not pick up any new infections.

Introduction of a creep crump at 10 days old until weaning helps their transition, as they develop the gut enzymes for solid food and become accustomed to eating it.

Pigs are also split-sexed at weaning, which has resulted in less mounting and fewer leg injuries. Pigs are given acidified water to reduce stomach pH for further health management.

Main reasons for antibiotics use in pigs in the UK (Ruma)