Brothers Ed and John Frost have halved antibiotic use on their 140-cow dairy farm in Somerset.

Currently at less than 8mg/kg across the whole herd, antibiotic use has fallen steadily from a decade ago when it was estimated at around double this.

Ed says antibiotic reductions has been part of a bigger mission to improve the resilience of their business with the third generation farmers deciding in 2009 to increase cow numbers and adopt a simpler management system. 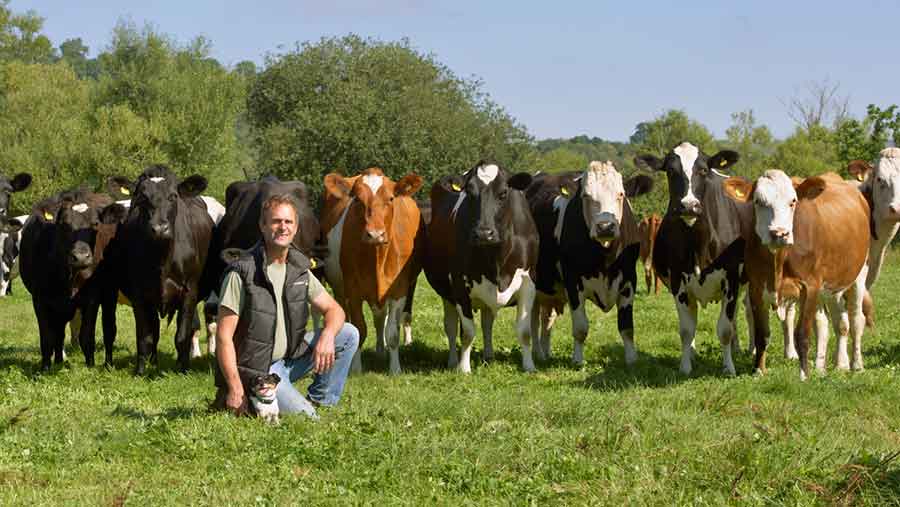 See also: Six ways to cut antibiotics use in your dairy herd

“We started using Danish Red bulls on our black and whites with the aim of improving foot and udder health and fertility and keeping more heifers back as they calved; Normande or Montbelliarde were then used on the crosses when they came into the herd.

“We phased out maize, which stopped spoilage and disease challenge from starlings.”

Instead the cows are now fed a simple diet of two tonnes a year of concentrate fed through the parlour, with grazed grass fed in the summer and silage in the winter and ad lib hay always on offer.

Calving pattern has also moved to predominantly winter-based, allowing them time off in the autumn.

Efforts to improve the soil have paid off too, he says.

Following several years of monitoring trace minerals and treatment with gypsum, pregnancy rate has increased from 33% to >48% and 100-day in-calf rate from 45% to 58%.

Mastitis and somatic cell counts have been one of the priority areas to tackle antibiotic use. Investment in triangular liners in the parlour has helped. Ed says the brothers have a rule to not skimp on any equipment that touches the cow.

Milk recording is another priority, with cell counts used to help identify cows that are suitable for selective dry cow therapy.

“Milk recording helps us identify cows that can be selected for drying off with a sealant. Five years ago we were giving almost a third of the herd dry cow therapy. Now we use antibiotics at drying off on 17% of the herd, with the rest having teat sealant only.”

“Having had samples cultured over the years, we know Streptococcus uberis is our main problem, so our vet can prescribe the right antibiotic for clinical or dry cow treatment when needed,” he explains.

As a result clinical cases of mastitis has fallen from 48 per 100 cows per year to 19 cases.

Any cows with cell counts of over 200,000 cells per ml in three consecutive monthly tests are treated with long-acting intramammary antibiotic at drying off.

“However, we have recently tried just sealing some that are marginally over 200,000, and they seem to have self-cured without problem,” adds Ed.

Cases of clinical mastitis are treated with a broad-spectrum antibiotic mastitis tube at each milking over three days, but no injectable antibiotic is ever used for mastitis treatment.

More severe cases will see affected cows treated with a non-steroidal anti-inflammatory drug (NSAID) in addition to intramammary tubes. If there’s a recurrence clinical case, then they repeat the treatment. But a third recurrence means the Frosts abandon that quarter for the rest of the lactation.

Another change has been to treat cases of digital dermatitis, which Ed admits is not a huge problem on the farm individually.

They lift the foot, trim out the infection, and treat with purple spray. Any escalation leads to formalin rather than antibiotic footbathing.

Calf scouring has been reduced by a regular thorough cleaning of the calving shed, at first every six weeks. This was then stepped up to every three weeks after a significant improvement was seen.

All bedding is removed, the floor is treated with lime then fresh bedding is put down. Subsequent to being moved into calf pens, any scouring calves receive oral hydration; only those with a temperature receive antibiotics.

The adoption of a risk-based approach to antibiotics has been supported by Orchard Veterinary Group, as well as QMMS and Nottingham Vet School.

Professor Martin Green from the University of Nottingham explains a calculator developed at Nottingham helps vets find out where the largest areas of use are on the farm, and highlights use of the critically important antibiotics.

“This can provide a very good start for discussions between vet and farmer about ways forward.”

Red Tractor is hosting a free members’ meeting at Sedgemoor Auction Centre on next week (9 May) where Ed Frost will be discussing how to reduce antibiotic use.