On farm, antibiotic use is coming under increasing scrutiny. Farmers Weekly talks to one pig producer who has cut £30,000 a year from his antibiotic bill by working with pioneering vets from the poultry industry.

Pig producers could cut antibiotic usage, save thousands of pounds and improve animal health by adopting an approach piloted in the poultry industry. The drive to use antibiotics responsibly in farming follows concerns over resistance to the drugs in human medicine.

Between 2012 and 2015 British Poultry Council members increased output by 5% but cut antibiotic use by 44%. 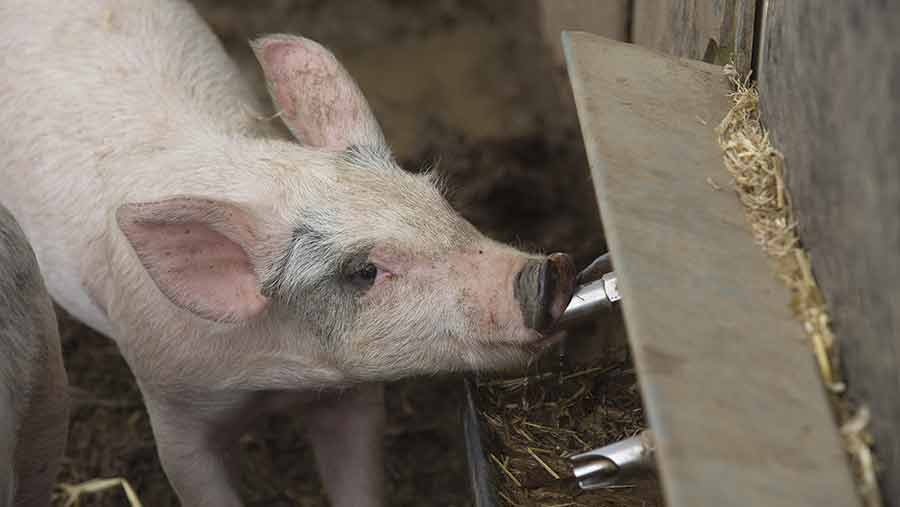 Practice partner Richard Turner says the same approach now has huge potential to improve welfare and yield financial benefits in the pig sector. The St David’s team has collated research and industry best practice from around the world.

Through its Applied Bacterial Control (ABC) programme, St David’s looks closely at all husbandry factors that are influencing the bacteria on a farm. It then develops a bespoke strategy to boost gut health and reduce the need for routine antibiotic treatments.

Central to the ABC system is clean water and the “seed, weed and feed” approach, developed in the US. This involves seeding the gut with beneficial flora, feeding it by creating the right environment and weeding out unfavourable microbes.

The aim is to achieve an earlier recognition of potential problems. Mr Turner says the first step is for pig producers to carry out a review of their whole unit and production system.
“Vets should be involved from the start of the process. Then we can identify where we can boost the pigs’ immunity by encouraging better feeding, drinking and housing systems and where we can cut down the bad bacterial build-ups and challenges.

“If we are called in late, and it gets to the point of using antibiotics, there’s already been lost profit and lost production,” Mr Turner says.

One key area which is often overlooked is the provision of cleaner drinking water. Better water line sanitisation leads to better gut health, he adds. He suggests adding buffered acids to water to reduce the pH.

A lower – more acidic – pH encourages the types of bacteria which can improve gut health while making it harder for unwanted bacteria to thrive. It is also possible to add a chlorine source water to increase disinfection and prevent biofilm buildup.

This must be done carefully with the correct equipment otherwise gas can be produced. The practice works with Shropshire-based Liquid Mineral Services, which installs and maintains equipment for water treatment and mineral delivery systems.

Mr Turner explains that a crucial stage is at weaning. The process of weaning can lead to damage to the villi on the gut walls and adjustments to the gut bacterial population. This change has to be well managed.

“In the early stage of its life the piglet’s immune system gets good protection from its mother but we need to maintain that level of health as it transitions to hard food.” The aim is to get short-chain fatty acids into the digestive system to stimulate and nurture the right microflora particularly in the lower part of the gut.

One route is to add a buffered acid to feed so it passes through the upper part of the gut before releasing the beneficial acid into the lower gut to establish the right microflora population and control the bacteria we want to manage such as salmonella.

“On a broiler unit we are looking at costs of about 1p/bird for a full acid system. For pigs it is about 5-10p per head,” Mr Turner reckons. 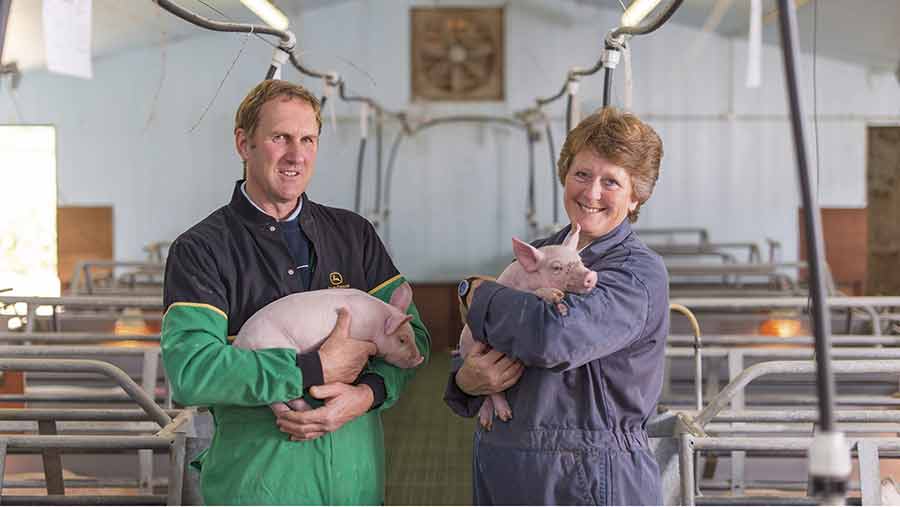 Devon-based pig producer Richard Knox (pictured with wife Liz)) has cut the farm’s antibiotics bill by £30,000 a year after improving the water quality and changing the feed system.

Mr Knox, who runs Tor Pigs near Okehampton, was concerned about the farm’s water quality because it was taken from a borehole and had a high iron content. The iron deposits caused a biofilm to build up in the water lines which harboured a range of bacteria.

“The water quality was poor and we were pulse feeding an antibiotic to control ileitis (inflammation of the ileum in the small intestine) in the pigs. We also often saw ulceration in the stomach of finishing pigs.”

Mr Knox looked to the poultry industry for solutions because the sector has conducted more work on improving water quality.

“That’s where I came across the approach being taken by St David’s vet Richard Turner and a company called Liquid Mineral Services,” says Mr Knox.  LMS carried out a joint visit with Mr  Knox’s own pig vet Fran Baird from the George Vet Group, Malmesbury, Wiltshire.

Together the parties carried out a whole-farm review and formed a plan to clean the water using chlorine and to add a blend of organic acids to lower the pH levels. In simple terms the disease-causing bacteria prefer a higher or more alkaline pH while the beneficial bacteria, such as the lactobacilli, thrive in more acidic or lower pH levels.

Organic acids were introduced gradually and the pH has been  lowered to about 4.2. As part of the whole farm review Mr Knox had a separate water source tested. The water was from a spring and naturally had a much lower pH.

“So as part of the health plan we switched from the borehole to the spring water,” he says.

The farm also changed its feeding system, switching from bought-in compound to mill and mix its own food with the help of nutritionists Harbro.

“They came up with a simple wheat, barley, soya, and fishmeal diet which were all good raw, unadulterated ingredients.”

The farm made a change to a different feed form and formulation by switching from traditional compound pellets to using Harbro’s “Tropper” mill and mix machine. This was done with advice from Harbro adviser Jonathon French and their nutritionist Kevin Stickney.

Mr Baird says the combination of rolling and grinding cereals has improved stomach and gut health to the extent that no gastric ulceration is now seen in finishing pigs, which had previously been causing mortality at an average of one to two pigs a week.

All in-feed antibiotics have been removed from the rations due to the increase in grist size improving gut health. Mr Baird says this needs to be constantly monitored to ensure the optimum combination of good intestinal function and feed conversion.

Mr Knox says the results of the changes have been dramatic. “The bloom of the pigs is fantastic; everything is looking really good. The quality, the cover on the pigs and the dung is world’s apart from where we were just 18 months ago.

“We don’t get the gut ulcers or the ileitis and don’t feed any antibiotics at all saving £30,000 a year.”