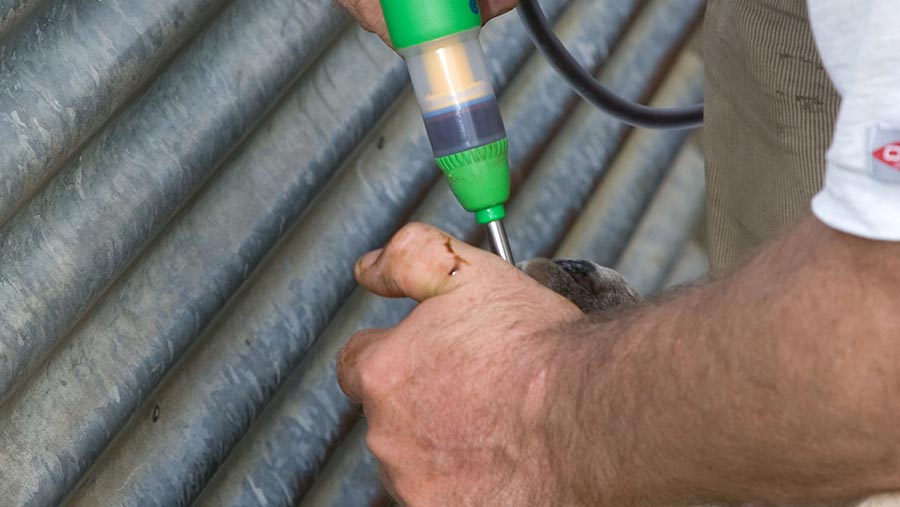 Sheep farmers can now see first-hand the cost of using the wrong wormer on their farm thanks to a free online tool.

The Sheep Drench Cost Calculator from Zoetis will help farmers, in conjunction with their advisers, decide which wormers to use on their farm.

The app demonstrates the potential loss in growth rate, labour and medicine costs when the wrong product is used.

See also: Parasite Watch: What sheep worms are rife in your region?

Resistance to sheep wormers is on the increase in the UK and every farm can have naturally occurring resistant worm populations.

Although some wormers may be more expensive, the effectiveness against worms is likely to be higher because there is reduced resistance.

For example, a white wormer may only have 50% efficacy and a yellow wormer 65% efficacy, compared with a clear moxidectin-type wormer (milbemycins), which often offers more than 95% efficacy.

Ally Anderson, Zoetis veterinary consultant, says the idea of the app is to show farmers that investment in the right wormer is worth it, even if it may cost more.

“Wormers that are more effective can be more expensive, but when you are buying a wormer that isn’t that effective on your farm, it’s not just the cost of the wormer you are losing, but production too, which often vastly outweighs the extra cost of the wormer.

“Ideally farmers should be working with their adviser and doing faecal egg reduction tests to see what the level of resistance is on their farm. This data can then be added into the app, instead of the UK average data, to give a more accurate picture,” she said.

Sheep farmer Tom Carlisle, Coxons Farm, Cracoe, Skipton, is lambing 500 Texel cross Mules. He says when he used the app, he was shocked by the potential loss in production of using the wrong wormer.

“Just by doing something as simple as changing a wormer, it’s surprising how much money can be saved for the duration the lambs are on pasture, even if it means paying more for the wormer,” he said.

For example, in a group of 40 lambs grazing pasture for 120 days, and averaging £2/kg, if a white wormer at 50% efficacy was used, then the total cost of lost production compared with a drench with 100% effectiveness was £131.62.

This is in comparison to £13.51 when a clear drench with 95% effectiveness was used.

The app can be downloaded from the Apple App Store or Google Play Store and is free of charge. You can also speak to your Zoetis account manager about the app.