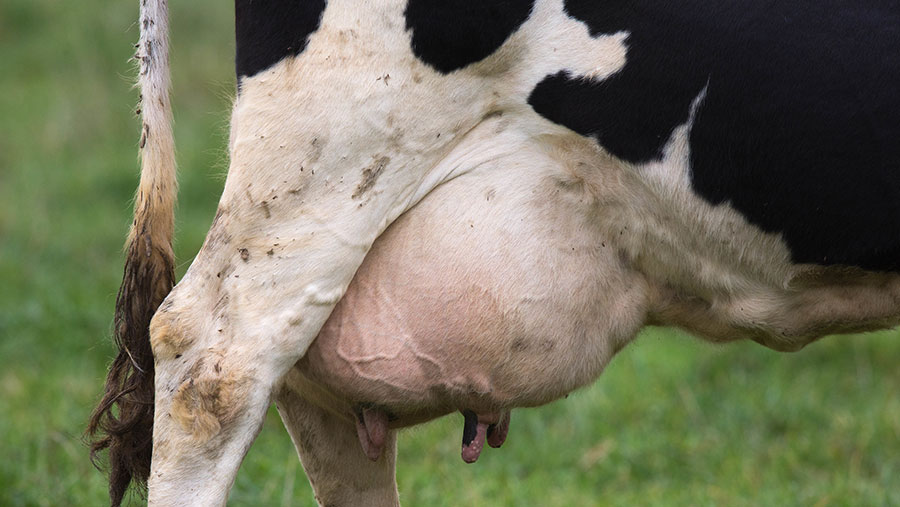 Implementation of the AHDB dairy mastitis control plan (DMCP) at one Shropshire farm has seen incidences of the condition halved in three years despite the milking herd increasing.

Specialist cattle vet James Breen and herd manager Nigel Jones explained the implementation and progress of the plan at the British Mastitis Conference on 15 November.

How was the plan determined?

James Breen, one of the vets trained as a “plan deliverer”, worked with the farm team and their vet to analyse all the available data. He looked at bacteriology, somatic cell count (SCC) and overall patterns of clinical mastitis.

Before the plan the numbers showed:

Because it appeared the issue was not contagious and not recurring, it suggested a dry period environmental infection, so Dr Breen was able to focus on making changes to affect this infection stage.

What changes have been made?

They key changes, implemented in 2014-15, were made to the environment of the transition and calving cows, and to the drying off process:

Transition cows now have their own building because the low yielders have been moved out of the same shed.

There are 70 cubicles, but there is only feed space for 54, so they keep it below 54 cows in there. This allows more room for getting the cows organised and they stay in there until about 48-hours before calving, Nigel says.

The slatted floors were filled in and are scraped daily by a tractor. And the bedding was changed to deep sand, which is cleaned off twice daily and changed with new sand once a week.

The stocking rate has been reduced by keeping cows in the transition group for longer and the calving cows are now bed on straw, which is changed twice a week, and fully cleaned out every two to three weeks.

“We try and keep it like an operating theatre now. There’s masses of surgical spirit,” says Nigel who oversees all drying off management with two other people.

An aseptic approach is used, with teats pre-dipped and then treated with surgical spirit and cotton wool, instead of wipes.

Nigel does the teat preparation and has two people focusing on tubing.

“I find having a head torch on helps a lot actually,” says Nigel, who also says they try to turn all dry cows on to a clean pasture.

What is the situation now?

The team now plan to concentrate efforts on maintaining the DMCP as well as focusing on other areas including:

How has this affected antibiotics use?

The farm has seen a big drop in the use of antibiotics. They are using 1,242 fewer tubes than before the implementation of the DMCP.

How the plan works (AHDB Dairy)

Step one: looking at farm data

The PD will then analyse the data in detail, looking for patterns of seasonality and diagnosing whether the majority of infections in your herd stem from the dry period or the lactating period and whether infections are predominantly from the environment or spread from other infected cows.

The PD may also want to do some bacteriology in order to make a diagnosis.

An on-farm questionnaire and survey will then be undertaken by the Plan Deliverer. All areas of the farm will be looked at and management practices observed, including at least one milking. The areas that will be most closely examined are:

The collected data and information from the questionnaire will then be evaluated and a list of specific action points generated.

Action points will be prioritised into “must”, “should” and “could” categories depending on their significance in tackling the mastitis and somatic cell counts issues.

The PD will then use their clinical judgement to decide which action points will have the biggest effect and should be addressed as a priority.

Discussions between the PD and farmer will take place to go through the action points and discuss how they can be best implemented.

A plan of action will be decided together and a date for review will be agreed, usually three months from the first visit