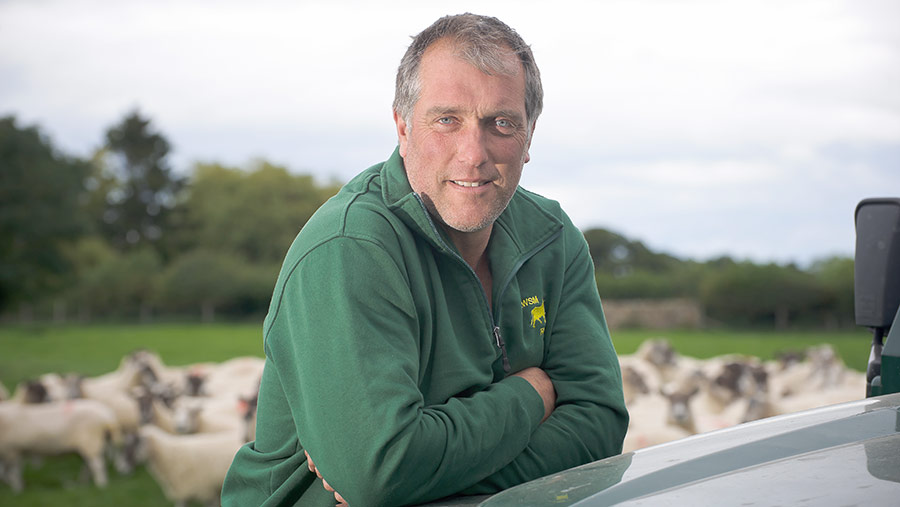 A County Durham shepherd is heading into the 2020 lambing period hoping to continue using fewer antibiotics in neonatal lambs after a major reduction last year.

Graeme Wood, who has been shepherd for AWSM Farming – a farming, contracting and recycling business – for 12 years saw no change in lamb mortality after cutting oral dosing by 70% last year.

Previously, all lambs were routinely given a shot of oral antibiotic (spectinomycin) from day one of the lambing period.

However, lambs now only get a dose if they are showing signs of illness and watery mouth from a possible E coli infection.

The strategy is to target antibiotics at small, weak lambs, triplets and anything looking under the weather.

Dosing only really started in late March during the flock’s peak lambing time.

“The advice now is to wait for an incident and then start dosing,” says Mr Wood. “We get a long way into lambing until we need to dose now.”

The move means the rate of antibiotic resistance in the lambing shed has been slowed, with the added benefit of saving £243/year.

“It’s not a huge saving, but in sheep you talk fine margins,” says Mr Wood. “A couple of hundred pounds here and there start to make a difference.

“We are going to try the same this year. Using fewer drugs is important as we are concerned about antibiotic resistance.”

The flock is run in a high-input system and has doubled in size since 2010 to manage grassland acquired as the AWSM Farming company has expanded to crop 910ha either owned, rented or contract farmed.

Tupping starts in fortnightly periods in August for a mid-February lambing lasting for eight weeks due to the size of the sheds and the logistics of moving sheep to lamb.

The raddle colour is changed fortnightly, which is done for ease of time management as staff work in weeks and not the sheep’s oestrous cycle, explains Mr Wood.

All sheep are brought back in wagons to Marden Farm, Barnard Castle, where they can be held on 20ha of grazing to lamb in fortnightly blocks bedded on wheat or barley straw.

Sheep are held in small paddocks and then loose housed ahead of lambing in groups of 60 ewes up to a week before lambing.

All staff (four day staff, one night person and a pet lamb feeder) work through March, which is the busiest month when typically 800 sheep can lamb in four weeks.

After lambing, sheep are loaded up in two wagon loads at a time and sent to summer grazing.

To be confident lambs can thrive without antibiotics, one of the most important elements to have in place is adequate colostrum to provide newborn lambs with antibodies, explains Mr Wood.

The process starts at tupping when ewes are condition scored. “I don’t like to take a day off from the sheep after scanning to keep an eye on them to note condition,” he says.

High energy buckets are used to keep condition on ewes and hard feed is supplemented by using the buckets as a gauge. Buckets are put in at a rate of one bucket for 50 ewes.

Last year the buckets went in after Christmas while this year they were added in late November. Ewes continue to have buckets until after they have lambed.

Sheep come off grass to lamb where they have been built up to 0.56kg/day of an 18% crude protein ewe roll and fed haylage (8ME) over the last six weeks of gestation. About 691 bales of haylage are made as forage for when ewes are inside.

All colostrum feeding of pet lambs and triplets is powder colostrum, ensuring all lambs have 10% of bodyweight in the first 24 hours.

At least two 60ml feeds are given in the first 12 hours to supplement ewe colostrum.

Between 100 and 200 pet lambs are reared each year on two milk machines.

The first machine feeds lambs milk at 30C for one week from two days old with lambs on ad-lib straw and water.

The second machine feeds lambs milk at 20deg to help digestion. Lamb starter pellets are introduced at three weeks old and lambs are weaned at 9kg.

The machine feeds up to five lambs per teat with three teats per pen and is cleaned and disinfected daily.

Another important factor in keeping a productive flock and minimising antibiotics use is the use of Toxoplasma and enzootic abortion vaccine.

“I had an abortion storm 20 years ago and I don’t want to see it again,” says Mr Wood. “I think it pays for itself in better lambs and fewer empty ewes.”

An amoxicillin injection is used if ewes are lambed at lambing time, and amoxicillin and clavulanic acid antibiotic is given for joint ill.

Bought-in shearlings are quarantined and kept separate until at least after lambing.

1 Double iodine
Navels are kept clean and lambs seem to thrive for having navels dipped in iodine twice in a special tip-dip cup – once after birth and when they enter the maternity pens.

It thoroughly coats the navel and, due to the bright colour, staff know which ones haven’t been done.

It costs £45 for one box and it lasted two lambings.

3 Footbathing
Alongside a foot-rot vaccine the flock go through a 2% formalin foot-bath with a disinfectant every week through lambing.

4 Dry disinfectant
Bedding is kept dry and clean by covering the straw of each pen with a litter conditioning powder after every sheep.

The powder creates a hygienic environment and means sheep pens only require mucking out fortnightly.

Red is “needs attention”, yellow is “hasn’t sucked” and another coloured string means the lamb was bottle fed through the night.