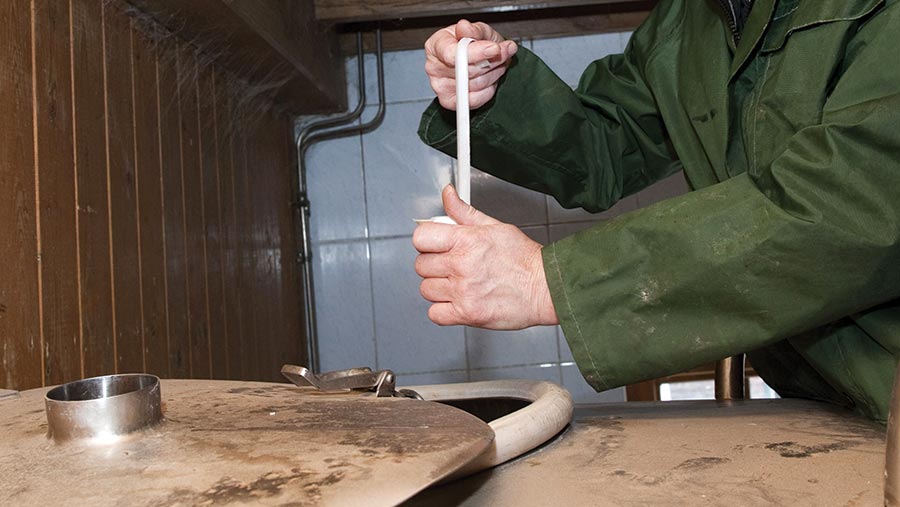 About three farms in Britain have a bulk tank milk antibiotics failure every day.

It is illegal to sell milk from an individual cow that has medicine residues above the maximum residue limit (MRL).

This law – and stringent testing procedures used along the supply chain – exists to ensure that milk for human consumption is ultimately safe and free from potentially harmful medicine residues.

See also: 4 areas where dairy farmers can cut antibiotics use

But medicine failures still represent a huge cost to the industry, with contaminated milk that has already made it to the depot having to be disposed of safely at the farmer’s expense to the tune of about £15,000/load.

MilkSure is a training course available for British milk producers developed by Dairy UK and the British Cattle Veterinary Association (BCVA) and delivered by vets to help prevent accidental failures occurring on farm.

He says the availability of newer tests means a greater range of medicines can be found, and at lower concentrations.

“The rules haven’t changed but the ‘goal-line’ testing technology has,” he explains.

“Everyone needs to be absolutely on their game to reduce our failure rate, particularly as tests become more sensitive.

Human error and equipment failure explain some tank failures, but failures can also occur because farmers don’t always understand the correct withdrawal periods – for example, when extended treatments are given.”

MilkSure is playing a big part in the drive by industry representative Dairy UK to lower the failure rate and some milk processors have already made the course a contractual obligation for their producers.

For example, any Muller milk producers that have a medicine residue failure must complete the course within three months.

“Dairy UK has an objective that every milk producer does the course. Some processors are starting with the farmers that have had failures, while others are targeting their whole milk fields,” says Mr Atkinson, adding that it’s all about education and taking a proactive approach on farm.

“Milk is a great product, but it does come in for attack from certain quarters. One thing that understandably worries consumers is whether their food contains any medicine residues, and protecting the clean image of British milk is hugely important.

“Our failure rate in the UK is lower than in many countries, but it isn’t the lowest. For example, in America, farmers can’t sell their milk unless they have a similar kind of accreditation done with their vet once a year, and this has led to a residue failure rate that is some 20 times lower than ours.”

A training course for British milk producers, launched in November 2017. It was developed by Dairy UK and the British Cattle Veterinary Association (BCVA) to reduce the risk of medicine residue in milk.

What does it involve?

Training takes place on farm and lasts approximately three hours. It is delivered by the farm’s own vet because they are familiar with the farm and take responsibility for medicines used there.

The training is based on a workbook and is broken down into two parts:

What happens once you pass the course?

The farm becomes MilkSure accredited and receives a certificate. The course is also worth seven Dairy Pro points for individuals who pass the test. A register of all accredited farms is kept.

Farmers must register for the course online first. Registration costs £65 including VAT per farm and the nominated vet will then be sent training materials. Vets can pay to go on a course delivered by the BCVA, but this is voluntary. The cost of the farmer training must be agreed with the farm’s own vet.

Register online at www.milksure.co.uk. Once you sign up you have three months to complete the course.

Dairy farmer Tom Mansell completed the MilkSure course in February as a refresher for him and his staff at Tilstone Bank Farm, where they milk 220 cows.

He first heard about the training course at a Tesco Sustainable Dairy Group meeting and despite not having had problems with milk failures, he felt it was important to ensure they were using the right medicine for the right job and there was no risk of antibiotics failure.

His vet, Amy Cox from Nantwich Farm Vets, carried out the training. Miss Cox went on a one-day BCVA course and has since delivered training to a number of clients. 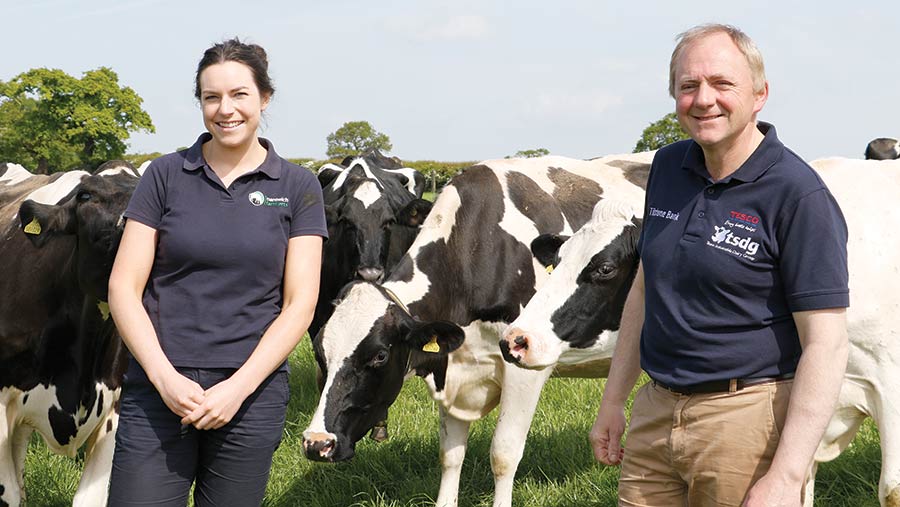 Mr Mansell made sure all farm staff were present at the meeting and it was on a day when they had plenty of time.

Things were going well anyway, but it provided them with an opportunity to update protocols, the herd health plan and remind staff of procedures, says Miss Cox.

“Ultimately, the responsibility of the safety of the milk lies with Tom. It’s not the fault of the staff if they are not trained adequately,” she adds.

After completing part one of the course (see panel), Miss Cox made sure everyone was clear about how to correctly identify dry and treated cows. At Tilstone Bank Farm, these cows are identified on a whiteboard, in a farm diary and using leg and tail tape.

She also went through the contents of the medicine cabinet and ensured that everyone knew how each medicine should be used and their withdrawal periods.

With no historic milk failures, there were very few actions identified.

However, Mr Mansell is using an inhibitory test to double check milk from cows that have passed their milk withdrawal periods and are safe to go in the tank.

Responsible use of medicines

This is all part of a wider drive on the farm to use medicines responsibly, with no critically important antibiotics used on the farm for more than 10 years.

More impressively, in the past 12 months the farm has gone from not using selective dry cow therapy to now only using teat sealant on 95% of the cows following training with Miss Cox last spring.

Mr Mansell said the success has been in part from keeping accurate milk records and maintaining good hygiene and low somatic cell counts of 100.

Cows now only receive antibiotics if their cell counts are averaging over 200 on the previous four to five recordings.

Common mistakes that cause medicine failure and how to overcome them