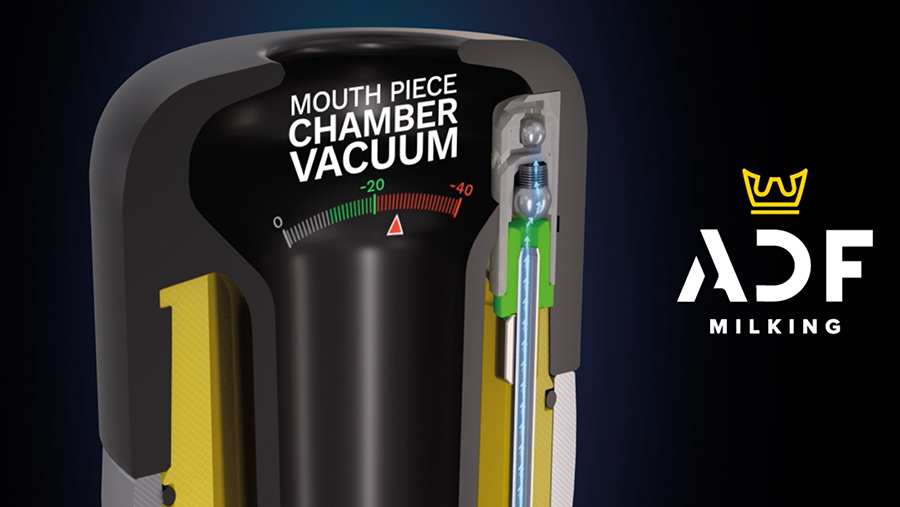 ADF Milking has launched pioneering venting technology that controls the vacuum within its liners to provide cows with a more comfortable milking.

InVent (intelligent venting) is designed to be used with ADF Milking clusters and liners, but can also be retrofitted to existing ADF Milking systems.

How the technology works

A reasonable vacuum in the mouthpiece chamber is desirable to prevent liner skip, but when the vacuum rises above 20 kilopascals (kpa), it can cause trauma to the teat.

Teats may be too small to fill the barrel of the liner.

This causes air to draw into the mouth of the liner creating excessive vacuum, explains James Duke, director of ADF Milking.

It is estimated that about 20% of cows within dairy herds will struggle with good liner fit and require venting.

This can lead to incomplete milkings and an increased risk of mastitis.

InVent detects when the vacuum rises above 20kpa, and a valve, located in the liner mouthpiece chamber, opens and injects clean, food-grade air into the mouthpiece, reducing the vacuum.

It only vents during milking so there’s no risk of cold air being introduced to the hot wash during cleaning.

Ian Ohnstad, milking technology specialist with The Dairy Group consultancy, has been monitoring the technology on two 600-cow farms in the UK as part of a trial.

On both farms, a split-cluster trial was carried out whereby the cows were milked on one side with vents, while on the other two quarters, the vents were disabled.

Teats were then observed for ringing – marks left by liners­ – as well as congestion and discoloration.

“Not all cows benefit from venting but, nevertheless, those percentages are highly significant,” said Mr Ohnstad.

James Lywood, who milks 200 cows at Battlehurst Farm in West Sussex, recently retrofitted the technology to his ADF Milking system and says it has shaved 30min off milking time despite increasing herd numbers – they are milking an extra three rows.

He is also running at just six cases of mastitis for every 100 cows.

Costs are dependent on current systems in operation and parlour size.

For a detailed price and more information contact info@adfmilking.com