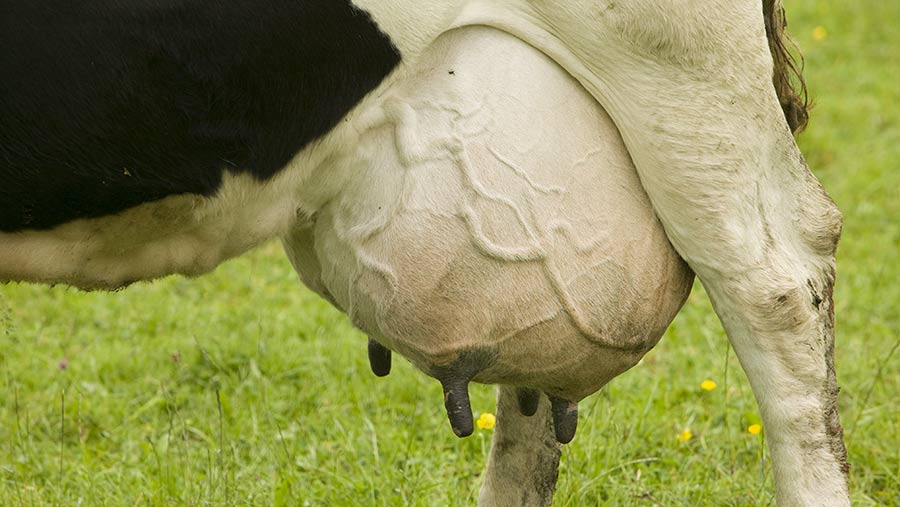 Ceva Animal Health has launched a new product that is proven to reduce milk production at drying off and cut intramammary infections.

Velactis, which is the only one of its kind available to dairy producers, works by blocking prolactin production in the brain’s pituitary gland and, as a result, rapidly decreases milk production.

Extensive trial work carried out throughout Europe by Ceva found:

Katherine Timms, technical adviser at Ceva Animal Health, says the product also improves the welfare of cows at drying off.

“This was demonstrated by another trial in which cows treated with Velactis were more comfortable, lying down for two hours and 21 minutes more on the day after dry-off compared to untreated cows.

“Lying time is a well recognised indicator of cow wellbeing and comfort, and it is not uncommon to see many cows dried off in the traditional way limiting their lying time as it puts pressure on a painful and engorged udder.”

Velactis, which should be used after the last milking, enables cows to be dried off abruptly without having negative impacts on cow health, Ms Timms explains.

“With Velactis, dairy farmers and vets are now able to carry out a truly abrupt dry off by milking cows right up to the point of dry-off without compromising on management, udder health or the welfare of the cow,” she said.

It also comes at an ideal time for farmers who may be opting for selective dry cow therapy.

“Used in conjunction with a teat sealant and on cows with cell counts under a certain threshold and no clinical mastitis, Velactis could assist producers improve udder health while cutting antimicrobial use at the same time.”

Issues with current drying off methods

Historically, there have been two ways to dry off cows, gradually or abruptly.

Traditional, gradual dry-off strategies to reduce yield at dry-off have been based around changing cows’ quality or quantity of feed and reducing milking frequency. Unsurprisingly, this method has fallen out of favour of late, due to the negative metabolic and welfare implications and the fact that it requires much greater management input.

“Most UK producers now favour an abrupt dry-off approach; cows go from being milked one day to being dry the next which is more time efficient and easier to manage. And while that is all well and good for farm efficiency, this approach does present some health and welfare challenges,” adds Miss Timms.

“The results of this study suggest that milk yields at drying off have risen significantly in recent times and, as a result, cows are now 1.69 to 1.79 times more likely to acquire new intramammary infections in the dry period compared to 1999.