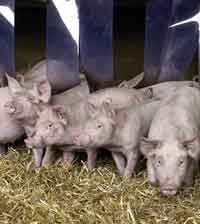 Collaboration between pig producers is needed to control disease spread, with a figure of £8 a pig put on the cost of subclinical disease in individual herds and £25m to the whole industry.

These hidden costs of disease could represent as much as 10% of the sale value, says David Thelwall, project consultant for Yorkshire and Humberside Health.

“Subclinical disease manifests itself by reducing productivity,” he says. “However, because disease spread is often airborne or by vehicles, only a collaborative approach will help curtail it.”

The Yorkshire and Humberside Health project, funded by Yorkshire Forward and BPEX, has already gained considerable support, with more than 90% of pig producers at a recent meeting – representing about 50% of the pigs in the region – agreeing to have their disease status mapped.

The scheme is looking to eradicate swine dysentery, enzootic pneumonia, PRRS and mange in the region, because they are most common diseases and have working elimination strategies.

Swine dysentery will be the first disease tackled, which is good news for producers in the region because cases have trebled in Yorkshire this year alone, says vet Neville Kingston.

“Swine dysentery cases have soared as more pigs have moved in to the area,” he says. “This is a worrying issue and, hopefully, the scheme will help concentrate farmers’ minds on disease.

“Some farmers already carry out disease eradication on their unit because healthier stock improves welfare, productivity and ease of management. But a co-ordinated approach will help reduce disease entering the farm in the first place.”

“Eliminating specific diseases from an entire region gives scope for retaining any investment in herd health, because the last thing you want is for your herd to go down with a disease after investing in eradication,” he says. “And the only way this can be done is working collaboratively.”

Disease statuses on pig units are being mapped, and vets were this week beginning to complete surveys about individual herd health statuses, with the permission of producers.

Producers are also coming together to work out eradication procedures, says Mr Thelwall. “Cluster groups are already being set up, with producers taking ownership of planning and central resources providing expert help and back-up.”

Surprisingly, producers have so far shown little reluctance to reveal the health status of their farm. “The message ‘we are all in it together’ is really coming home to roost,” says Mr Thelwall. “This is the first time we’ve had a plan that is so worthwhile and the support so far is a testament to the industry.”

Richard Lister, pig farmer and chairman of the steering group, says this is a great chance for producers to upgrade herd health in a co-ordinated way. But he stresses that radical action is not the only option to eradicate disease.

“This doesn’t mean depop-repop is the only option, as this is a drastic approach and also costly. Action will depend on the type of disease and what you want to achieve, with specific vaccination protocols and reshuffling routines likely to be adequate for many.”