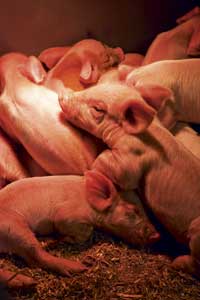 Danish pig production may have come under criticism with regard to its welfare standards following the “Jamie Saves Our Bacon” campaign but, after a recent visit to the country, it seems significant investment is being made to improve pig welfare.

With more than 60% of the land in use for agricultural production and consumption of pork twice that of the UK, at 50kg a head a year, it’s no wonder more money is being invested in the industry and specifically research.

More than DKr96m (£11.8m) was invested in research by the Pig Research Centre (now part of the Danish Agriculture and Food Council) last year alone and this is largely because farmers acknowledge they have to adapt and change fast to remain competitive, according to Trine Vig, DAFC.

“The Pig Research Centre puts knowledge into practice, which can then aid farmers in their decisions and prevent them making a lot of bad investments,” she said.

Loose housing in the farrowing unit has been one way DAFC has been looking to improve sow welfare, as well as improving the public image, according to senior project manager Vivi Moustsen.

“Our aim is to improve welfare for sows without compromising piglet welfare but, at the same time, improving the public image,” she said.

Although there is no legislation to replace farrowing crates with loose farrowing systems yet, there is increased interest both nationally and in the EU, explained Ms Moustsen.

“With increasing interest surrounding loose systems, our advice to those building new farrowing units within the next five years would be to try loose housing for farrowing and lactating sows on a small scale, so they can get a feeling for it.”

However, the debate often being raised with loose farrowing is the rise in piglet mortalities from crushing. But from research already undertaken by the DAFC, it seems piglet welfare could be maintained.

“The challenges have been to overcome piglet mortality and hygiene. But by changing pen design, by sloping floors to reduce speed of rolling movements and also a special invention which is going through the patenting process, we will hopefully be able to overcome this,” she said.

Manipulating different zones in the pen so there are clearer feed, rest and dunging areas is also important, she added.

And farmers are obviously taking the advice to invest in loose farrowing systems as, in 2007, there were a total of 280 pens installed and last year this rose to 327 pens with 606 on order.

However, Ms Moustsen accepted the move towards loose farrowing systems will take time, with many producers having a level of uncertainty about production level, staff safety and costs.

Castration is routine practice for many Danish pig producers, with more than 3% of pigmeat from boars tainted. However, previously performed without pain relief or anaesthetic, the procedure has been the target of recent negative press.

But as of June this year, a strategy to overcome the problem has been the use of pain relief, with compulsory legislation coming in early 2010.

Pain relief is only a short-term strategy though, explains Nicolaj Norgaard of the Pig Research Centre.

“The long-term aim is to not castrate. Next year we will be trialling sexed semen, but it will be three to five years before this gets in to production. Trials using chicory will also be undertaken as this is thought to lower the amount of skatole in pork, but not eliminate it,” he said.

However, with 72,000t of pigmeat being exported to Japan – a country that only demands meat from female or castrated carcasses due to their increased sensitivity to skatole – alone, some kind of validation will be needed to ensure the export market to Japan remains, explained Mr Norgaard.

“Online sorting systems at abattoirs to detect pigs with levels of boar taint will be needed to assure the Japanese market of meat without high levels of skatole. However, it will probably be 10 years before we see these in the slaughter lines.”

Chemical castration using a new vaccine was also discussed, but Mr Norgaard said he was nervous about the market situation, particularly the consumer reaction.

Although Ole Haahr (pictured) is not supplying the British market, its clear welfare standards in his 820 sow herd are still a key consideration, demonstrated by his above average production figures.

Rearing 30.7 pigs a sow a year, his vision is to build a modern business with emphasis on the environment and animal welfare.

When Mr Haahr took over the 160ha farm from his father in 2006, there were no pigs. But, realising he couldn’t just live off the fields, he invested DKr25m (£3m) in a new unit.

“It’s been an uphill struggle, but we are seeing the production figures now, particularly with pigs in their fifth parity,” he said.

More than 80% of semen is from their own Duroc boars, with 40 Landrace x Yorkshire sows inseminated a week. Sows farrow in crates, with adjustable side bars, which are opened up after four days – maximising piglet and sow welfare.

Piglets are weaned at 32 days and money has also been invested in some loose farrowing pens as a trial.

“Although farrowing crates are easier to manage and economically loose farrowing is not as good due to a 20% mortality level, we will still have more installed in the future, as new design techniques could help reduce crushing levels,” he said.

However, the major difference between production systems at Nolev Ostergard and UK systems is the four-week period sows are housed in stalls post-weaning.

“The reason we house sows in stalls post-weaning is to minimise stress from mixing sows and to maximise embryo survival. However, after four weeks they are housed in groups and fed by electronic feeders with wet feed,” he explained.

Mr Haahr rears weaners up to 30kg, selling them to two farmers for finishing. Enrichment, like the UK is compulsory, although the “manipulable material” can come only from a natural resource in Denmark.

But Mr Haahr has adopted a novel way of occupying weaners’ time by using a scatter feed system on the solid area of the pen. Although he accepts some feed is lost down the slats, the enrichment benefit pays off.

“This not only helps reduce competition at the feed face, but it also occupies their time for longer,” explained Mr Haahr.

Pigs also have to nose at the feed trough instead of just freely accessing it. Straw provided in racks and wood blocks were also available as forms of environmental enrichment.

Meeting environmental requirements is also a key issue for Mr Haahr. Slurry is separated with the liquid portion and on land. The dry matter is then exported to a neighbouring arable farmer. Heat from the slurry is also removed, which is then used to heat the building.

50% finishers produced in herds with more than 400 pig places