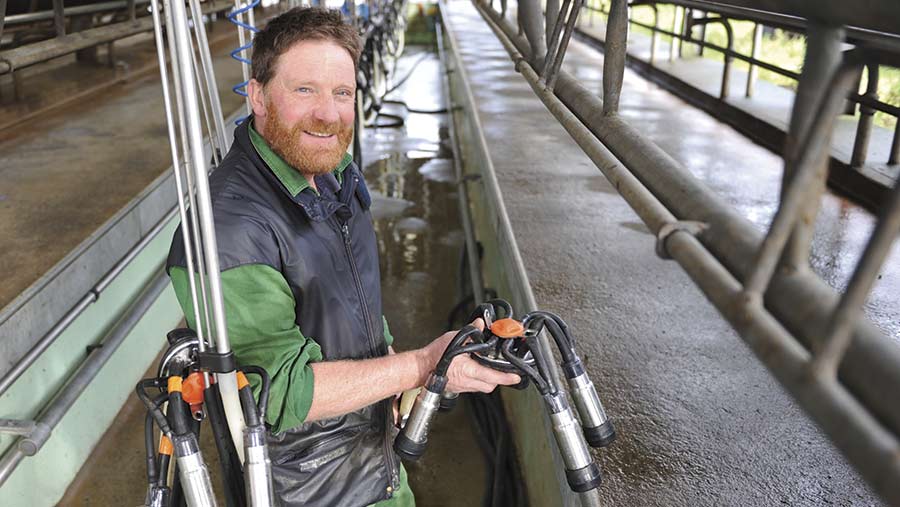 Making sure teat liners are correct for your herd and are not being used beyond their lifespan is important to prevent udder health problems.

They are the one part of the milking plant that has direct contact with cow teats so ensuring cluster liners are fit for purpose is crucial to mastitis control and efficient milking.

Extending the life of liners beyond their recommended lifespan is false economy, warns Ian Ohnstad, Milking Technology Specialist at The Dairy Group.

As liners age, their shape, tension and surface condition alter so they are prone to slipping, harbouring bacteria and damaging teat ends.

Mr Ohnstad says there is very clear guidance on when liners should be replaced. Skimping on this part of the milking protocol may mean savings in the short term but the repercussions on cow health and milk production may be costly.

Signs that liners are ageing

The most obvious indicator that liners are ageing is a reduction in milking speed and an increase in liner slips. When liners are incorrectly matched to the teats in the herd, the most obvious symptom is a deterioration in the visual appearance of the teats after milking.

Mr Ohnstad advises farmers to closely examine cows’ teats post-milking. “This is a very good indicator of how well the liners fit.’’

If the liner is too big there will be signs of discolouration; teats will be a red/blue in colour and firm, a sign of odema and congestion.

There could also be a build-up of tissue swelling at the junction between the teat and udder, resembling a ring. This may be palpable.

“This mouthpiece ringing is symptomatic of high mouth piece vacuum for any period of time because the liner is too big or the teats are too small and the teat is not sealed well in the barrel,’’ Mr Ohnstad explains.

If the liner mouthpiece orifice is too small, the larger teats will have little penetration into the liner and this will reduce milking efficiency.

Getting a good fit

Teat size in a herd will vary so it won’t be possible to get an exact fit for every cow; the aim should be to get a match for the herd average.

Mr Ohnstad admits liner choice is often a compromise or trade-off between competing objectives. A liner designed to reduce slippage might be less comfortable for cows while a design intended for fast milking might leave more trapped milk in the udder cistern.

Accepted industry guidance on the lifespan of liners is 2,500 milkings for standard black rubber liners and between 6,000 and 10,000 milkings for more expensive silicone liners.

For a 100-cow herd milking twice a day in a 10-point parlour this works out at 120 days. This is calculated by multiplying the herd size with the number of milkings and dividing this by the number of milking points. To work out how often they should be changed, divide the resulting figure by 2,500 if standard rubber liners are used.

Mr Ohnstad says the frequency of replacement very much depends on the number of cows being milked. “It is similar to the service interval for a car. A car that is doing high mileage will need servicing more often. I have one client who changes liners every four weeks.’’

There are three factors that influence the lifespan of liners – ozone in the atmosphere, ultraviolet light and parlour cleaning chemicals.

“Farmers can’t do anything about the first two but they can make sure they are using chemicals at the right concentration,’’ says Mr Ohnstad. “Check the dosage rate because at the wrong rate the liners will age more rapidly.’’

Liner choice is extremely important to udder health. The type of liner to use is usually dictated by the milking system; farmers generally use liners produced by the manufacturer of their plant because they match the pulsation and clusters of that system.

“If the cows’ teats are telling you that the liner isn’t right for the cow, speak to the dairy engineer for your plant manufacturer to see what others are available for that cluster,’’ advises Mr Ohnstad.

The engineer can use diagnostic equipment to evaluate which liners best suit an individual herd.

“Choosing an effective liner is a decision that should not be taken lightly. There will always be a range of teat sizes and shapes in a herd. The best liner for any herd is the one that will perform well over the widest range of teat sizes.’’

But farmers also report success from using liners other than those produced by their plant manufacturer; the key is to correctly matching the liners and their shells.

When changing liners, it is imperative the system is set to the manufacturer’s recommendations for that liner. Vacuum levels must be assessed and pulsators checked.

And always change all four liners within a cluster at the same time, Mr Ohnstad recommends. This will maintain similar milking characteristics between the teatcups.

Barrel size: Liners are generally described as either wide, medium or narrow-bore. Ideally liners should have a barrel diameter about 1-2mm less than the average diameter of teats after milk letdown.

Liners ride higher on the teat as the bore increases. Just a small change in this dimension can have a big influence on their milking ability. Liners should fit firmly to prevent twisting in the shells.

Liner length: The teat sizes in a herd will dictate the liner length as will the liner bore. Liners should be long enough to collapse below the teat. The benefits of teat massage caused by the collapsing liner are reduced if the liners are unable to collapse because the teat penetrates too deeply.

Design: Liners come either as a one or two-piece, with the two-piece designs having a separate short milk tube. One-piece moulded liners are popular because they are straightforward to assemble and change.

Natural, synthetic or silicone rubber? This is largely down to personal preference – rubber liners need replacing more frequently but are cheaper, while silicone designs are more expensive but last longer, although individual manufacturer’s claims on longevity vary.

Standard black liners cost in the region of £16 and £30 for four, while silicone liners are priced at around £50 a set. One of the key marketing claims of silicone is that it is more resistant to cracks, reducing the potential for liners to become reservoirs for mastitis-causing bacteria.

Reducing liner size was one of a series of changes that led to a marked reduction in somatic cell counts at a Ceredigion dairy farm.

At Nantybach, Llangranog, an assessment by mastitis expert Dr Adrian Joe flagged up an issue with the claw liners and this was contributing to high levels of Streptococcus and Strep uberis mastitis in the herd.

“Our existing liners were too big and this was causing the cows’ teats to expand and that was uncomfortable for the cow,’’ explains Chris Mossman, who runs a spring-calving Jersey crossbred herd on a grass-based system at Nantybach.

Mr Mossman employed Dr Joe to assess his milking routine and he recommended a series of changes. A wide range of alterations included changing the liners and dropping the operating vacuum from 48kPa to 43kPa.

“Adrian’s mantra is to do everything you can to protect the teat ends because that’s the only way bacteria can get in. Get the liners and the vacuum levels right, don’t over-milk and have a good dipping or spraying routine. It’s as simple as that.’’