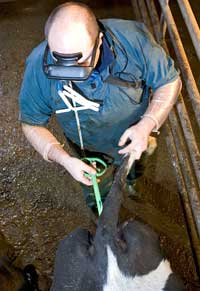 The number of farm animal veterinary practices is in decline and could fall by another 27% before 2016, a report by Newcastle University has shown.

The report, which makes recommendations on ways to revitalise the farm vet service, painted a picture of a profession at a low ebb and revealed the decline in farm vet services during its research.

It found that just 10% of vet practices in the UK had farming clients and that 18% of practices said they intended to move away from farming by 2016.

A further 4.5% told the university that they were likely to leave agriculture by 2016 and another 4.5% were still deciding whether to focus entirely on small animal practice.

In total 27% of practices could be lost to farming within the next seven years, leaving just 680 to cover the UK.

Report author Philip Lowe said there was an urgent need to overcome the increasing marginalisation of farm vets and the profession needed to rethink its relationship with farmers and with the government.

The relationship between the vet profession and the government had become strained, he said.

He highlighted weaknesses in the public health role of vets and the cultural divide that had come about with the centralised development of the Meat Hygiene Service.

“This specialisation has cut the link between local vets and food hygiene in abattoirs, which is now largely implemented by professionals who have qualified abroad,” said Prof Lowe.

But despite the gloomy picture he was optimistic about the profession and the government cost-sharing proposals.

The government proposals on animal health present both challenges and opportunities, he said.

“The profession should seize the initiative and create a Veterinary Development Council, which could reconnect professional education and training with the needs of the [farmer].

“It would also provide an opportunity to formalise the major part that vets can play, helping to equip farmers with the skills in animal health that they need to run their businesses and to ensure the supply of safe and good-quality food,” said Prof Lowe.

He recommended that the vet profession’s drift away from agriculture could be addressed by better training and preparation for young vets on farm animal practice and that the use of technicians to carry out routine tasks, offered a more “flexible and differentiated vet service”.


Unlocking potential, a report on veterinary expertise in food animal production, is by the Centre for Rural Economy, University of Newcastle.