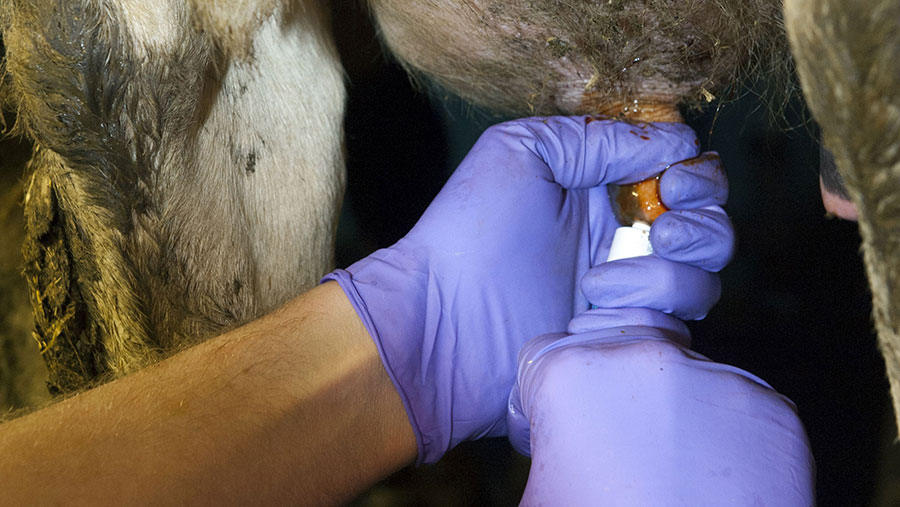 Red Tractor-assured cattle and sheep farms have cut the use of some of the most critically important antibiotics by 92%.

The dramatic reduction in use of the highest-priority, critically important antibiotics (HP-CIAs) followed the introduction of tougher Red Tractor standards in June 2018.

Less than 18 months later, a new study released at the British Cattle Veterinary Association Congress (17-19 October) show how effective the new standards have been.

Westpoint vet Tim Potter, in association with Kingshay, carried out a study of veterinary records from 2,764 UK beef, sheep and dairy farms.

Analysis of the records revealed sales of HP-CIAs had fallen by 92%, with one type, Colistin, now almost down to zero purchases for farm use.

The study also found farmers were not simply switching from one antibiotic type and replacing it with another – overall use was also down.

That means he expected to see an overall increase in the amount of active ingredient used, as farmers reverted to these older types. However, total sales of antibiotics also fell, with a drop of 22% throughout the period.

Mr Potter said the study demonstrates how much the new Red Tractor requirements had helped by including instructions that HP-CIAs should be used only as a last resort under vet direction and guided by sensitivity or diagnostic testing.

Farms are also now required to collate their annual medicine use and discuss use of HP-CIAs with their vet.

“There was already an awareness of the importance of cutting back on prescriptions for the highest-priority antibiotics,” Mr Potter said.

“What this study shows is that the implementation of a formal hurdle to the use of these more important antibiotics has driven behaviour change at farm level. That has been achieved by requiring the vet and farmer to have a conversation about their medicine regime.

“These conversations, backed by changes like increased uptake of vaccination and disease-eradication programmes, appear to have reduced the use of HP-CIAs,” added Mr Potter.

Richard Simpson of Kingshay, co-author of the study, said the requirement for collation and review of antibiotics use by the vet had also helped.

“In our study, this increased the engagement of farmers on the topic of responsible use of antibiotics and ensured there was an overall reduction in use. It is not simply a substitution of alternative products for the HP-CIAs – as demonstrated by the fall in total sales.”

Mr Simpson said Kingshay developed an antibiotics sales reporting service after an increase requests for medicine reviews and their integration into the health planning process.

“The reports have proved a valuable tool for promoting farmer engagement,” he explained. “By providing a breakdown of the class of products used, vets have been able to provide tailored advice to farms on specific areas for improvement. The use of anonymised benchmarking has provided context to that data.”

Gwyn Jones, chairman of the Responsible Use of Medicines in Agriculture Alliance (Ruma), said the UK had achieved a 48% overall reduction in on-farm antibiotics use between 2013 and 2017.

This was not just about defining suitable targets, but also identifying ways to drive change – as illustrated in this study, Mr Jones said.

“Assurance schemes are a very good mechanism for this. It’s clear that following last year’s changes to Red Tractor standards, a lot more discussion is happening between farmer and vet.”