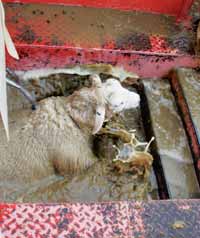 Controlling sheep scab isn’t just an issue for Scotland after it was made a notifiable disease, but farmer-led eradication schemes are also being set up elsewhere. Sarah Trickett takes a look at some of the routes being taken to tackle the problem

Sheep scab may have a stigma, but it is this mindset that could be holding back eradication.

The crux of the problem is that while some farmers are prepared to treat and attempt to control, others don’t have the same level of concern, says vet Kath Dun, Royal (Dick) School of Veterinary Studies.

She has been working with a group of farmers in the Pentland Hills, south-west of Edinburgh to try and eradicate scab, but says it is a difficult mission to sustain.

“We ran regional scab eradication projects in 2003-04 and successfully controlled scab. We did this using a combination of non-treatment risk assessment of freedom from disease, whole flock plunge OP dipping and whole flock treatment. However, the success was not maintained due to poor biosecurity and dwindling enthusiasm.”

However, Ms Dun believes that with the introduction of a new persistent-acting formulation of moxidectin, that gives 60 days protection against the scab mite, there is more flexibility for the timing of treatments of neighbouring flocks or groups of animals.

“By targeting a specific time such as the month of October when everyone should treat, it is hoped the vicious circle of scab in the area can be haltered and knocked on the head.”

It was this approach that Ms Dun, along with other vets and farmers in the region, tried to achieve last autumn. Although it is unsure how successful it was, with data currently being collected from participating farms, Ms Dun believes any increase in awareness will leave the hills in a much better state. “If we can keep at it, at least we can reduce the issue,” she says.

She believes that if the Pentlands operate the same procedure of one targeted treatment in October, then it will help clean up the area. “After this then we can look at individual risk factors to scab to try and stop using as many drugs, as relying too much on injectables could lead to resistance problems.”

The development of a new diagnostic test for sheep scab by the Moredun Research Institute, which can detect the mite before clinical symptoms develop, could further aid in the control. “This will definitely be a good tool for monitoring scab as it has detected the mite in flocks that didn’t realise were affected.”

A sheep scab eradication scheme is also being pioneered in Wales with brothers Dafydd and John Jones, Machynlleth, west Wales involved in the farmer-led programme.

More than 30 adjoining sheep farmers are involved in the initiative’s catchment area; the goal is the eradication of sheep scab and minimised risk of its reintroduction, through co-ordinated preventative treatment and biosecurity.

Dafydd Jones says part of the problem when controlling scab is the window of opportunity for scab mites between the traditional use of OP dips by some farmers in the autumn, and the use of injectable scab treatments by others pre-lambing. He sees scanning in January as a potential vector for flock-to-flock transmission of scab mites.

With this in mind, the plan involves preventive scab treatments across the initiative’s entire catchment area within the months of January and September, using either an OP dip or the 60-day persistency injectable moxidectin product.

Vet Hugh Williams, Tywyn, who has also been involved in the initiative, believes that as long as all farmers in the area comply with the programme, the scab mite can be eradicated.