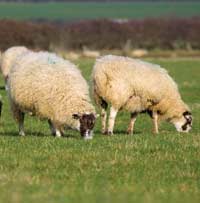 Sheep farmers are being asked to fill out a fluke survey to encourage “grass-roots” feedback and help scientists develop better control strategies.

Janssen Animal Health, in association with the National Sheep Association, is turning to farmers to find out how quickly the situation on the ground is changing and how farmers are controlling it.

Fluke is a disease on the move, says Janssen vet Nigel Underwood.

“Wet warm summers have led to fluke reproducing faster than ever before and even moving into areas that have traditionally not hosted the parasite, such as East Anglia.”

“There is no substitute for this ‘grass-roots’ feedback. What matters most, in any disease of production animals, is how it is actually being experienced on real farms,” he says.

The company has previously run studies looking at coccidiosis, where farmers consistently reported findings that challenged accepted wisdom about the disease.

“The effect fluke has on productivity and livelihood matters. Using feedback from the survey, scientists and academics can develop better control strategies that can be applied in practical situations.”

Janssen is asking as many sheep farmers as possible to fill out the survey. As an incentive, 10 lucky respondents will be drawn out the a hat to win a Phillips drench gun each.

The survey will be distributed in the July/August issue of the NSA’s Sheep Farmer magazine and farmers can request a copy by calling 01494 567 555.