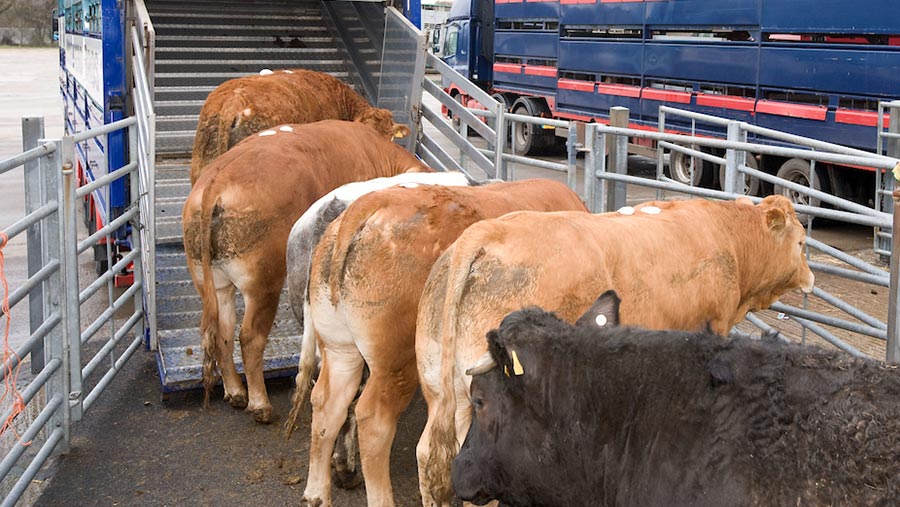 Buying in cattle can connect a holding to more than 1,000 other farms in any given year, an analysis of British Cattle Movement Survey (BCMS) data has found.

An exploration of the 75 million recorded cattle movements between 2001 and 2015 by Exeter University has revealed that up to half of farms could be connected to 1,000 others through the cattle they buy.

In 16% of cases, farms (suckler, dairy, finisher, store) buying cattle were connected to more than 10,000 other county parish holding (CPH) numbers in a single year.

The study also found that:

The report – published by The Royal Society – concluded that dairy farms could be ‘disproportionately influential’ for disease spread, which could offer a potential target for control measures.

Finishing units, meanwhile, were “more susceptible” to acquiring infection but less likely to pass on infection due to cattle being slaughtered.

An extreme example showed that a Devon farm that bought six cattle from four farms ended up being connected to 11,132 other CPHs.

The four farms from where the cattle came were connected to 10 other holdings.

Over the course of 12 months, this linked the Devon farm to units as far away as Kent, North Wales and Orkney.

How can we better manage disease risks when trading cattle?

Exeter University’s professor Robbie McDonald, the senior author of the study, said: “Currently, it is very difficult for farmers to see the whole history of the animals they buy and the status of the farms they are directly bought from.

“This research shows that even farms that buy their cattle very carefully might be exposed to infections from many other unknown farms across the whole country.”

Professor David Barrett, from the Bristol Veterinary School and British Cattle Veterinary Association President, said the paper underlined the risks farmers take when trading cattle and the possible impact animal movements have on the spread of disease such as bTB.

He said the paper was further proof of the dangers posed by animal movements, particularly through auction marts.

To manage risk, he advised farmers to work with vets to minimise the risk of introducing infectious disease as far as possible. This could be done by:

Mr Barrett said: “Until the industry takes responsibility for reducing the risk of animal movements, the control of endemic diseases will be hampered.

“For example, we could move to a system where only cattle destined for slaughter are sold at markets, all other trading being undertaken online with animals moving directly between farms. The whole industry needs to embrace a risk-based trading mindset.”