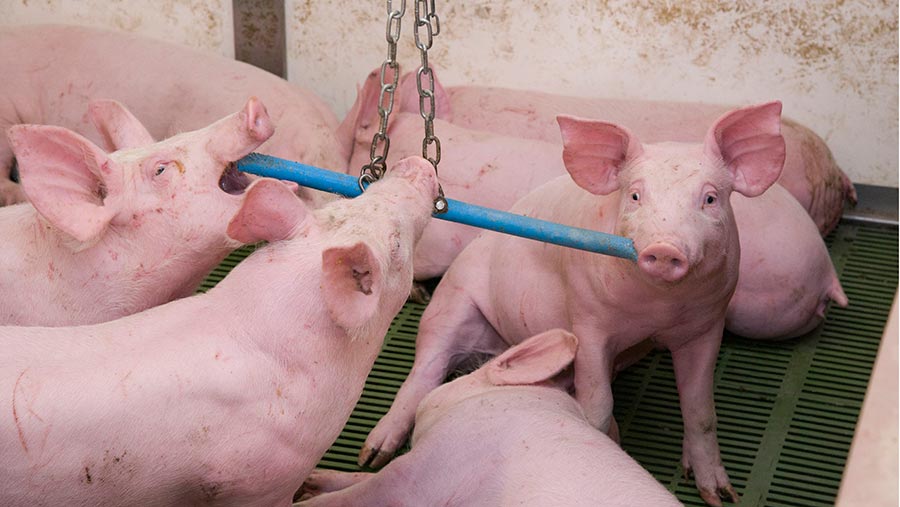 Cases of swine dysentery have continued to rise in the second quarter of 2019 according to the latest report from the Animal and Plant Health Agency (Apha), with another outbreak confirmed earlier this month in Norfolk.

Data from Apha’s pig disease surveillance dashboard shows 19 cases between January and October this year, making up more than 3% of all diagnoses.

Diarrhoea and wasting continue to be the main clinical signs reported, with the disease occurring mainly but not exclusively in pigs of grower to finisher age.

The latest case in Norfolk is suspected to have been present for 10 days, but the only clinical sign was looseness, according to AHDB.

Strict biosecurity and biocontainment measures are now in place and the unit will be depopulated. The exact origin of the outbreak is currently unknown and is under investigation.

AHDB said: “If you have recently moved pigs from Norfolk please monitor them closely for the development of any clinical signs of enteric disease and notify your vet immediately if you observe any suspect diarrhoea.

“It is important a heightened level of biosecurity and monitoring for clinical signs are observed over the next few weeks, especially within the Norfolk region.”

According to National Pig Association (NPA) chief executive Zoe Davies, there are probably more cases of dysentery than are being reported, with some, but not all, being recorded on the Significant Diseases Charter.

She said: “It is clear that there is a lot more dysentery out there than we think. It is important that we know where it is.”

What is swine dysentery?

The charter, which is free of charge, requires English producers to notify Apha of swine dysentery or PEDv outbreaks. There is a separate charter in Scotland which all member of the Quality Meat Scotland (QMS) assurance scheme are signed up to.

In the event of an outbreak all producer signatories and their vets receive the first half of the affected postcode, along with the planned course of action, but the identity of the producer concerned is not shared with charter members or external bodies.

Because of growing concerns about under-reporting of the disease, the NPA Producer Group and the Pig Veterinary Society have both put forward a proposal for the Significant Diseases Charter to be compulsory under Red Tractor.

This is due to be discussed by the Red Tractor pig technical advisory committee this month.

How do you control swine dysentery?

Biosecurity
• Regular on-farm biosecurity audits with your vet, to identify and address weak points, are key to preventing an outbreak of swine dysentery and limiting spread if your pigs do become infected. Maintaining good biosecurity has the wider benefit of reducing the risk of introduction and spread of other diseases including salmonella and PRRS.
• Use the AHDB Pork Biorisk tool to identify key areas to target.
• Make sure all staff are aware of the biosecurity procedures.

Implement lorry washing standards
Abattoirs are an area where there is high potential for cross-contamination of vehicles, and this can be prevented with effective cleaning and disinfection. It is a requirement of the BQAP assurance scheme that pig lorries must be thoroughly cleaned and disinfected before leaving the abattoir. If a dirty lorry arrives on your unit, don’t be afraid to turn it away. The #muckfreetruck campaign has been launched to highlight the importance of clean vehicles.

Significant Disease Charter
Pig producers are encouraged to sign up to the Significant Diseases Charter, whose members share details of outbreaks of swine dysentery on their farms with other members, helping farmers to know when they are most at risk and may need to tighten biosecurity. Sign up by logging into the Pig Hub.